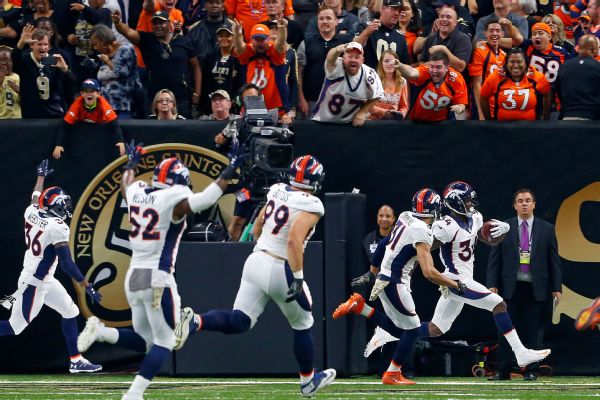 NEW ORLEANS -- In a play some Denver Broncos players called "leaper,'' rookie safeties Justin Simmons and Will Parks combined for the two points that gave the Broncos a 25-23 victory over the New Orleans Saints on Sunday.

After Saints quarterback Drew Brees threw a 32-yard touchdown pass to Brandin Cooks with 1 minute, 30 seconds to play to tie the game 23-23, New Orleans simply needed the extra point to get the win. As a result, special-teams coordinator Joe DeCamillis made a call and took a risk.

"Great call by Joe,'' said Broncos coach Gary Kubiak, adding that "it's something you work on all the time. It's risky to do, because if you touch somebody you know it's a penalty. But there are situations in a game where ... it's worth the risk, and that was one of them.''

"It's all or nothing,'' Simmons said. "They make the extra point, the game is pretty much over.''

At the snap Simmons leaped over Saints long-snapper Justin Drescher to block the kick and Parks fielded the bouncing football and started up the left sideline.

Parks was not touched by a Saints defender. Broncos cornerbacks Kayvon Webster and Bradley Roby escorted Parks up the sideline as he covered 84 yards for the two points that made the difference.

"I saw the ball really high in the air, behind the line of scrimmage, so I knew I had to go,'' Parks said. "...That play, look at that orange pylon go, all I could think about was winning this game for this team.''

After being reviewed by the replay official to see if Parks stepped out of bounds, the play was upheld.

"They said upstairs, 'Coach, he's got a white shoe on; it's really, really close. The fact that they called it one way, I think it will stand.' So they felt that way,'' Kubiak said. "...You're always worried (about a review).''

"I took ballet in fourth or fifth grade, so I've got toe game,'' Parks said.

Dean Blandino, the NFL's senior vice president of officiating, broke down the play Sunday night on a video released by the league and agreed with all of the rulings on the field.

Asked if Parks stepped out, Saints coach Sean Payton said he didn't get a great view of the play.

"Well, it's hard to tell. I think those guys are doing their best to look at it. He's got white shoes on, the sideline's white, so there's not a real good picture -- at least I didn't see one. So I understand."

When told that a lot of fans think Parks stepped out of bounds, Brees said, "It doesn't matter. Let's not even get to that point."

But Brees did say he was still in a "little disbelief" after the game.

"It's tough to play a game like that, fight as hard as we all did, then have it come down to something like that," Brees said.

The Saints tried an onside kick after the play, but it was recovered by the Broncos to secure the win.

"It made everything,'' Simmons said. "...It was nice today to kind of get our feet wet a little bit to get a game-changing play and help this team get a W.''

The Broncos' block and return was the first such play to provide the winning points in an NFL game and the third return for two points since the NFL began allowing defensive scores on such plays in 2015.

The Saints will likely turn the play in to the league in the coming days since there are some replays that show Broncos defensive end Jared Crick, lined up to the defensive left of Drescher, push Drescher's head down after the snap; holding the long-snapper's head down is a penalty.

Drescher felt that he was pulled down on the play.

"I will have to watch it on film, but it felt like their defensive tackles kind of pulled me forward and down, so I really couldn't pop us as fast," Drescher said. "That's what I felt in the time and the moment."

Blandino said it didn't look as if Drescher had been pulled down to the ground.

"[Crick's] gonna get his hands up on top of the snapper and push him toward the ground. That's legal," Blandino said. "Open-hand push, legal. If there was a grab and a pull, that would be defensive holding. This is a similar concept as an offensive lineman blocking a defensive player. If he can get up on top of that defensive player and push him toward the ground, it's legal, versus grabbing and pulling him."

"More power to them. They had a great scheme," Drescher said. "It's frustrating because it's a hard way to lose." 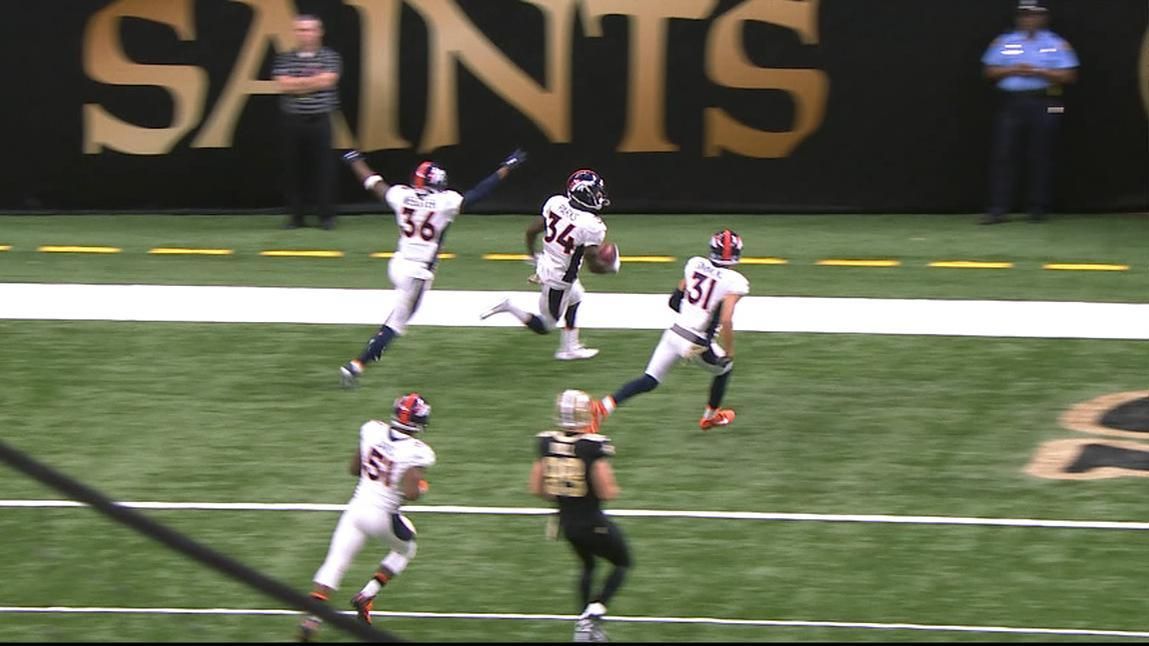 Broncos return blocked PAT for dramatic win
After the Saints tie the game on a late Drew Brees touchdown pass, the Broncos block the go-ahead extra point attempt and instead return it the other way for a Broncos two-point conversion and a wild winning score.