CHICAGO -- It was opening night, 2016. The young Chicago Cubs were coming off a surprising run in the previous year's playoffs -- all the way to the National League Championship Series. Now it was time to pick up where they left off, as the team began the new season against the Los Angeles Angels.

Walking through the clubhouse before that game three years ago, Cubs brass, led by president Theo Epstein and general manager Jed Hoyer, felt that certain something every great team possesses -- a winning vibe -- and it would stick with them long after the night was over. That feeling manifested itself in a 9-0 win, including a signature inning on offense that would define the Cubs in the batter's box that season. They made Angels starter Garrett Richards throw 41 pitches in the fourth inning as they broke open the game. Wins piled up early for the Cubs -- they started 25-6 -- on their way to a historic world championship at season's end.

"That particular vibe was so focused and sort of businesslike," Hoyer recalled on Friday.

Fast-forward to this weekend, and the first time the Cubs will play the Angels since that opening two-game series sweep. Many fans are wondering where that vibe has gone -- where that offense has gone -- and if their former manager of the year in 2016 will be around to see this October. Simply put: Can the Cubs find it again before their window for winning closes? They've been searching and a 5-8 start to this season has only deepened that question.

"Generally, you're right," Hoyer answered when asked about finding that vibe again. "One of our goals is to get back to that day-in and day-out level of attention to detail and level of competitiveness. 2016 will probably always be the gold standard for us. We really think we did that day in and day out all season and into the playoffs. It's ultimately what we want to get back to."

So how do they do it? Perhaps Friday was a good start as the Cubs once again pounded the Angels with some old-school slugging. They hit four home runs in the 5-1 victory, harking back to 2016, when they ranked fifth in the National League in long balls. But home runs weren't really the identity of the team.

Some may forget, the real strength of the Cubs that season was a five-man rotation that ranked first in ERA (2.90) and WHIP (1.07) by an extremely wide margin. In fact, between 2011 and 2018, the 2016 Cubs rotation had the best ERA of any in baseball. Manager Joe Maddon knows what he had back then and knows what he needs now.

"You cannot score enough runs to just rely on your offense," he said. "I've never seen that work. ... I prefer the pitching and defense method. And then really work through the offense. I think that's what we've done."

Starting pitching has been the Cubs' identity when they've been at their best. So much focus was on the bullpen early this season that perhaps people didn't notice the Cubs' starting staff was dead last in ERA over the first few weeks. But now, it's climbing, up to 12th in the NL after stellar starts by Cole Hamels and Jose Quintana the past two days.

"It's our time to finally get into a rhythm," Hamels stated. "That's the sort of friendly competition we have on the staff. We're trying to promote playing better and getting the best out of each other and raise and elevate our game."

That statement could have been one made by Jake Arrieta or Jon Lester or Jason Hammel in 2016. Each starter wanted to up the ante on the previous day's hurler back then. Many times they did, and it led to a 25-6 start that set the tone for many of the good things to come for the Cubs.

"I've been part of good starts but nothing like that where you put significant distance between you and the competition right away," Hoyer said. "It's a great feeling. Made for a lot easier August and September. That made a big difference."

At 5-8 in 2019, the Cubs are miles from the 2016 team that tore through the NL. But they seem to have a road map and know they'll have to defy some odds. The Cubs don't possess a true No. 1 starter in the way the Mets do with Jacob deGrom or the Nationals do with Max Scherzer. But they do have five names -- Hamels, Quintana, Jon Lester, Kyle Hendricks and the enigmatic Yu Darvish-- who have talent and experience. It just hasn't shown up much yet.

"That's how you get on rolls then, all of a sudden that big offensive day is going to show up," Maddon said.

In fact, the opposite has happened. The Cubs have had big offensive days, scoring 10 or more runs in five games already, but their record is still below .500, further proving the cliché that pitching (and defense) is key. If it wasn't evident before, it is now.

The path back to the top of the standings, after a horrendous 1-6 start to the season, is through their rotation.

"We've had bad stretches like this in every one of our good seasons," Hoyer explained. "We haven't had one in the beginning. It does take away that margin for error. We need to start winning series. You won't make it all up in five days. Given the NL this year, we're going to have to grind out series wins. And we'll need our starting pitching for that. 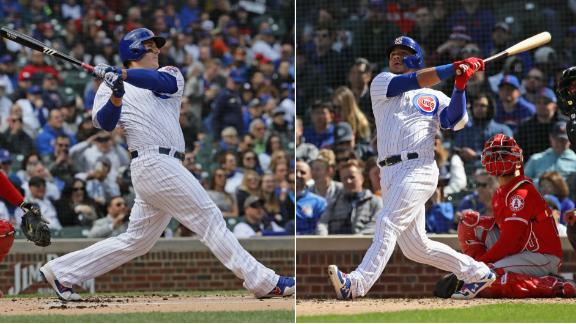