Clowney: 'A lot of pain' in knee 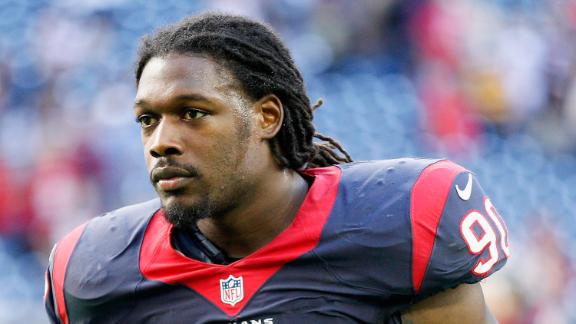 HOUSTON -- Texans outside linebacker Jadeveon Clowney said his surgically repaired knee is swelling on him and caused him to play with a great deal of pain in Houston's last game.

Clowney, who has not practiced yet this week, said he will test his knee before Sunday's game in Houston, but his chances of playing are slim.

"A lot of pain right now, just been bothering me off and on the whole season," Clowney said. "Something I've got to push through, but when the swelling comes up, it's a little setback."

Clowney saw his most significant action of the season against the Bengals on Nov. 23, playing in 49 snaps on defense. He had three tackles and one tackle for loss in the Texans' 22-13 loss.

Before the game, he reached out to inside linebacker Brian Cushing, who had major surgeries on the same knee in 2012 and 2013.

"I told him before the game my knee was bothering me during the week," Clowney said. "He was like, 'Come out here and do the warm-up I do.'"

Clowney had decided prior to the game that he was going to play one way or another, but mimicking Cushing's warm-up helped him loosen up.

The initial injury occurred in the first game of the season. Clowney tore his meniscus and had surgery the next day. He missed six games after that, returned against the Tennessee Titans, then missed another game due to a combination of his knee and having a flu-like illness.

Clowney has played in the Texans' past two games.

"I'm kind of surprised; I thought it would have been over," he said. "I thought it'd be back to where it was by now. Some people react differently to injuries. ... Right now I just think it's letting it heal. You push it, push it, then it swells. You've got to let it go back down again. Right now just letting it heal and try to get it back to where it was before I got hurt, before the Cleveland game [two weeks ago]."

Foster has missed the Texans' last two games with a groin injury he suffered on Nov. 2 against the Philadelphia Eagles. Foster has practiced for the past two days and O'Brien was pleased with how he looked in practice.

The Texans face the Titans at home this weekend.

Foster has missed three games, two with the groin injury and one with a hamstring injury. He returned after missing only one game with the hamstring injury, but was ineffective in Week 4 against the Buffalo Bills, rushing eight times for six yards.

In every other game he's played this season, Foster has rushed for at least 100 yards. He currently ranks seventh in the NFL with 822 rushing yards.