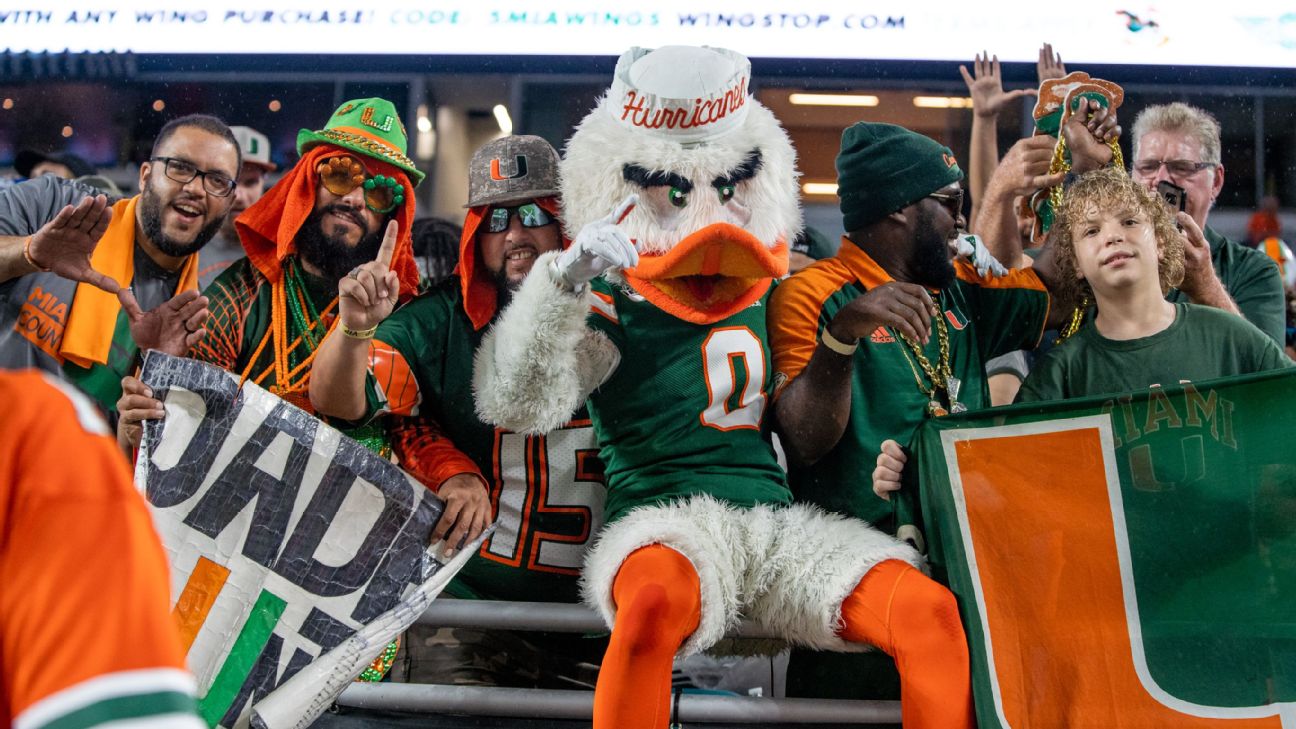 It's Week 3 of the college football season, and hope is floating, or whatever that saying is.

The Big Ten is coming back and the fall slate is looking beefier as a result.


But this is a week when the football gods flexed their muscle to remind us of the reality we're in. We got the excitement of an old Southwest Conference rivalry being rekindled with the matchup scheduled just six days before Houston and Baylor were set to play. Then, just one day before said matchup was to happen, Baylor found itself on the wrong side of the Big 12's threshold for COVID-19 positives and had to cancel.

But SMU coach Sonny Dykes had reason for optimism when he revealed Friday that the Mustangs have had zero positives in 1,320 tests in the past month. #PonyUp, indeed.

Back on the field, there are two Top 25 teams featured this week! Now we're talking. At Louisville, they're pumped for College GameDay, and the basketball dude wants the Cardinals to air it out. Get ready for a big day with a look at the best stuff around the country -- including an inflatable orange.

A 2-0 start for the first time since 2016 has optimism high for the Panthers, but the schedule is about to get a lot tougher. With an explosive Louisville offense on deck, Pitt's physical defense will get its biggest test of the season next week. A win in that one could putt Pitt into legitimate ACC contender status. As it is, there's plenty of reason to be enthusiastic, with QB Kenny Pickett playing well and the quick impact of freshman receiver Jordan Addison. --David Hale

Cincinnati handled its first game of the season with very little issue, picking up where it left off last season. The Bearcats defense wasn't where the questions were heading into this game, it was mainly what the offense would look like without running back Michael Warren and who would step up to make plays. The offense had over 500 yards against Austin Peay, with quarterback Desmond Ridder throwing three touchdowns and the team combining for 260 yards rushing with five touchdowns on the ground. It was only the first game, and the opponent should be considered, but it was a great start for Cincinnati, who is hoping to win the conference this season after coming up short in 2019.--Tom Vanhaaren

Oklahoma State walks away with a difficult win over Tulsa, concerned about the status of QB Spencer Sanders after he left the game in the first quarter with a "lower extremity injury." The Cowboys' offense struggled, and didn't get a kick until Mike Gundy put third-string freshman QB Shane Illingworth in, who immediately gave the Cowboys the spark they needed, helping WR Tylan Wallace and RB Chuba Hubbard look like the stars that they are. If you're an Oklahoma State fan, you're hoping Sanders is all right, but Illingworth gave you hope moving forward when it seemed there was none. -- Harry Lyles Jr.

Survive and advance. It was a custom-made hangover game situation for UL. Fresh off of one of the program's biggest wins and ranked for the first time in nearly 80 years, the Cajuns had to take on a physical and athletic GSU team and quickly fell behind, 14-0. But two huge Elijah Mitchell runs keyed a 28-7 UL run, and while they couldn't close things out in regulation, another Mitchell score in OT closed out the comeback. Excellent response after a rough start.-- Bill Connelly

The Irish offense got off to a slow start in week one against Duke, but had no problems this week against USF. Quarterback Ian Book didn't even have to finish the whole game as backup Drew Pyne came in to get some reps along with a few other backups in what ended up being a blowout for Notre Dame. The ground game really came together for the Irish with 127 yards and a touchdown for C'Bo Flemister and 65 yards and one touchdown for freshman Chris Tyree.--VanHaaren


Trevor Lawrence wasn't on the field long Saturday, but it was still plenty of time to rack up 168 passing yards and four total touchdowns. He's good. More fun, however, was the sneak peek Clemson fans got at the team's next star QB, D.J. Uiagalelei, who was the top quarterback recruit in the country in 2020's signing class and got to show off his wheels a bit against The Citadel. Uiagalelei ran twice in the first half and both were good for touchdowns. He finished the game 8-of-11 passing for 75 yards as well. The rich just keep getting richer. -- Hale

Even if Appalachian State had beaten Marshall, there was a decent chance the Mountaineers would have fallen out of the AP poll once the Big Ten teams were eligible for inclusion. Their uninspiring 17-7 loss guarantees it. After scoring on an 11-play, 85-yard opening drive, App State was lost offensively the rest of the game and any preseason dreams of representing the Group of 5 in the New Year's Six are gone. --Kyle Bonagura

If anyone did not believe quarterback Dillon Gabriel was the real deal after an outstanding freshman season a year ago, all they needed to do was watch a few snippets of the Knights' win over Georgia Tech. Gabriel threw for a career-high 417 yards and looked in command of a tempo offense that was not even hitting on all cylinders for the entire game. UCF has now scored 30 or more points in 38 of its last 39 games and have gone 40 straight games with both a passing touchdown and a rushing touchdown. This was UCF's only shot to make any impression against a Power 5 opponent this season, and they looked terrific doing it. -- Andrea Adelson

After Miami beat UAB thanks to the strength of its powerful ground game, the question was whether the Hurricanes could get their passing game going. They answered that question big time in their win over Louisville. D'Eriq King threw for over 300 yards -- including two touchdown passes that went 40 or more yards. But the run game was not silent. Cam'Ron Harris had over 100 yards rushing, including a 75-yard touchdown run. The Louisville defense contributed, looking lost for much of the night. But Miami took advantage of some clear schematic advantages and scored their most points in a road game since 2001.

The Cardinals made their turnaround under Scott Satterfield thanks in large part to their explosive offense. But for the second time in as many seasons against Miami, that explosive offense was shut down. In their loss to the Hurricanes, quarterback Malik Cunningham struggled to get the ball downfield and did not handle the blitz well. Meanwhile, the maligned Louisville defense had breakdowns left and right -- allowing big Miami touchdown plays to be the ultimate difference in the game. --Adelson

Masks from the past

The shine is back

Miami, the OG in the turnover chain game, debuted the 2020 version, now in the shape of Florida.

Comeback of the day

Illinois, which dropped Chief Illiniwek as its mascot in 2007, will vote on Monday to consider the Belted Kingfisher, a pretty cool bird, as its new mascot. The movement began when Spencer Hulsey, an Illnois alum and a dang astrophysicist, posted the sketch and idea to Reddit.

If you don't know much about the Belted Kingfisher, first of all, SMH (OK, fine, we don't either). But we'll trust that Audubon.org DOES know. So here are few of their reasons why this is a no-brainer:


Citadel punter gets by with a little help from his friends

A week after Citadel punter Matt Campbell became the latest name to be added to the "Of course, It's 2020" list, our resident kicking expert Pat McAfee and a few of his notable football friends provide encouragement for Campbell after last week's blunder.

After a 55-3 loss in Week 1 to BYU, Navy was down 24-0 at halftime against Tulane and had been outscored 79-3 on the young season. The Midshipmen then outscored the Green Wave 27-0 iin the second half for a big comeback win and a new outlook on the season.

At Louisville, Louie the Cardinal got help from basketball coach Chris Mack and athletic director Vince Tyra with some prep work for GameDay's arrival.

Mack, for the record, is a big fan of throwing it deep.

Georgia got the internet buzzing with its uniform video, featuring some oft-discussed black jerseys, but this time with a Dawg collar.

From the great beyond

UCF's very shiny mascot, Knightro, has revealed his new powers by reviving the Citronaut, a combo citrus/space explorer who was the first mascot of the former Florida Technological University, which is now UCF.

Gotta get down for Fry day

North Texas is playing a Dallas-Fort Worth Metroplex foe this weekend and will be honoring legendary coach Hayden Fry, who coached at both schools, with some sweet throwbacks. 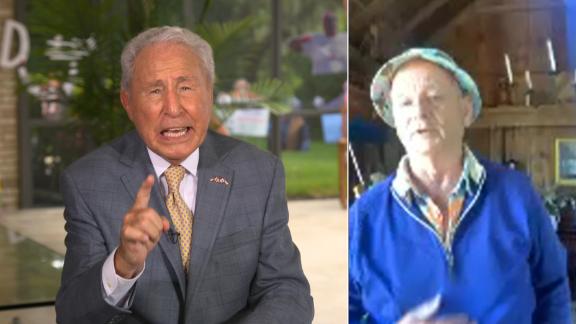 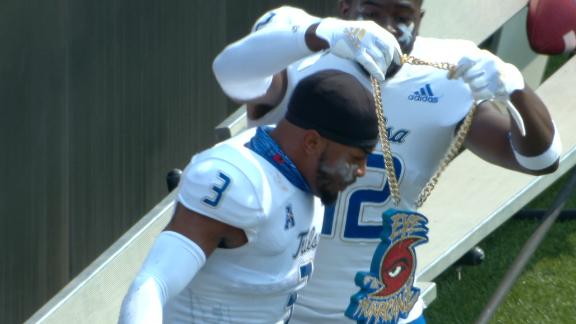 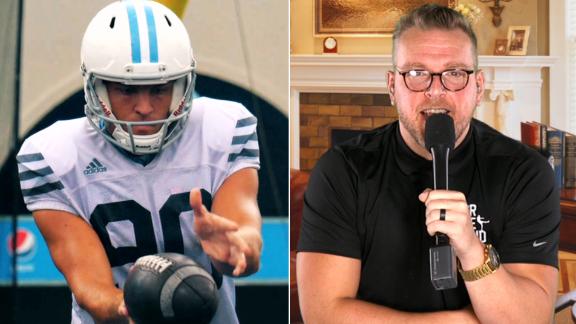 McAfee insists Citadel punter will bounce back after all-time blunder
Resident kicking expert Pat McAfee chats with Citadel punter Matt Campbell after last week's blunder, which some are calling the worst punt of all time. 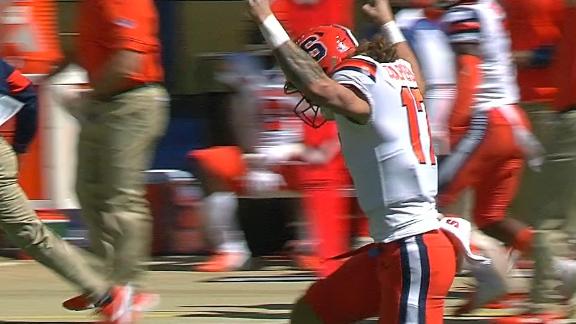