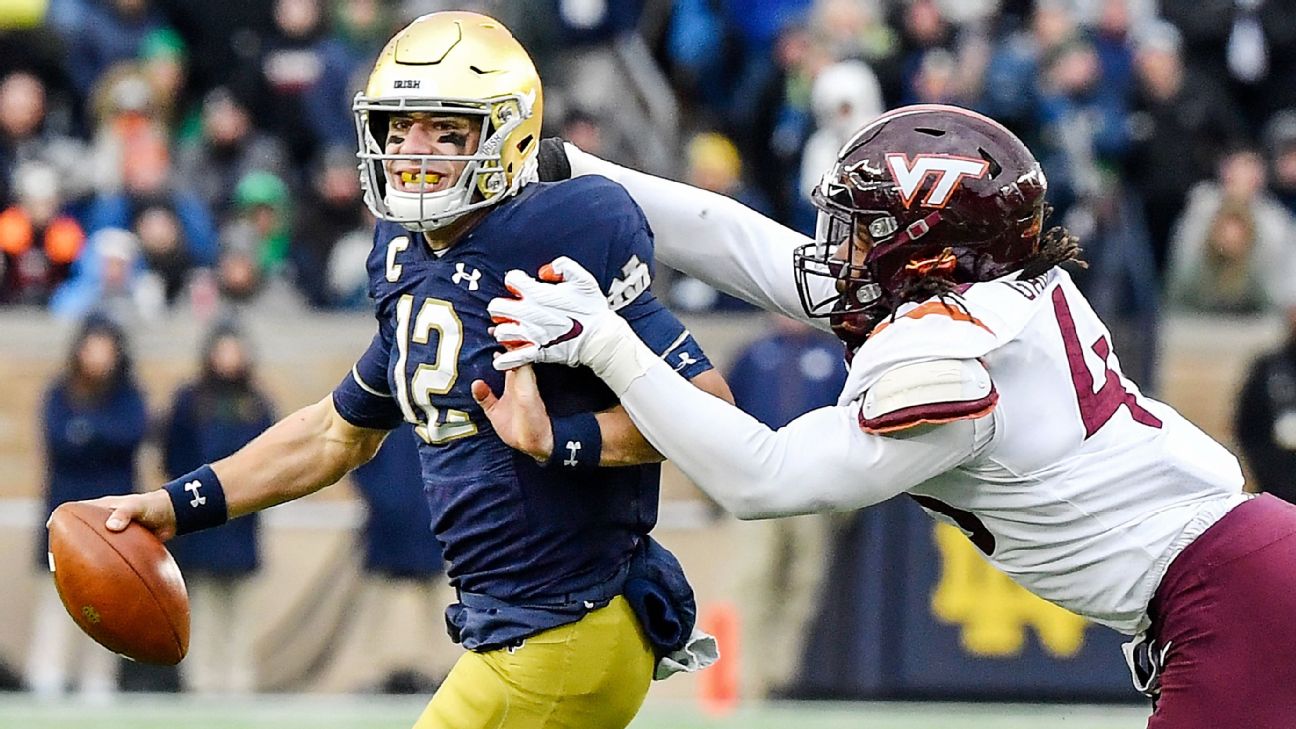 In this second installment unveiling the top 100 games of the 2019 college football season, we're focusing primarily on the most exciting upsets and nearupsets of the year, from UCF's frustrating finishes to Minnesota's early near disasters.

OK, so this one was only barely an upset -- Troy was a one-point favorite -- but the ending was impacted by a common underdog tactic. Troy led most of the first three quarters until Jacqez Hairston's 3-yard run (and a 2-point conversion) gave Coastal a 28-21 lead with 17 minutes remaining. Troy wasted no time coming back, taking a 35-28 lead midway through the fourth. But after an 11-play drive, CJ Marable rumbled in from 3 yards out to make it 35-34 with 30 seconds left ... and then ran in the 2-point conversion to win it.

Cincinnati would go on to win 11 games and an AAC East title, but the Bearcats were 3.5-point underdogs against the two-time defending conference champs in this Friday night affair. UCF blew a few early scoring opportunities -- the Knights' first four scoring chances resulted in just three field goals and an interception -- which bought the Cincy offense some time. An 11-yard Desmond Ridder-to-Alec Pierce touchdown strike made it 27-16 Bearcats, and while UCF inevitably charged late, Cincinnati converted a fourth-and-1 from midfield with a minute left. Ballgame.

A month later came a much bigger upset. After falling just short in upset bids against SMU and Memphis, Tulsa finally sealed the deal, but only after lulling UCF into a false sense of security. The Knights led 28-17 at halftime but came out of the locker room sluggish. Tulsa's T.K. Wilkerson scored to make it 28-24, then Seth Boomer found Sam Crawford Jr. for a 17-yard score to tie the game at 31-31. After a series of costly missed field goals throughout the year, Jacob Rainey knocked in a 23-yarder, and with 1:27 left, a desperate fourth-down pass from UCF's Dillon Gabriel fell incomplete. 34-31, Golden Hurricane.

Tennessee would finally find some traction late in Jeremy Pruitt's second season, winning six games in a row to go from 2-5 to 8-5. But Year 2 certainly didn't start out as anyone expected. After taking a 23-21 lead early in the fourth quarter, the Vols completely wilted, giving up three straight scores with two turnovers in between. Dan Ellington's rugged 22-yard touchdown gave the Panthers a two-score lead they would not relinquish in this stunner.

After winning at Rutgers and Purdue in previous seasons, the Eagles made it three in a row against the Big Ten by taking a 31-17 lead on three touchdown passes fromMike Glass III(23-for-36 for 316 yards on the day). After two late Illinois touchdowns, a 24-yard field goal by Chad Ryland at the buzzer won it. Over the past three years of Chris Creighton's incredible EMU rebuild, he is slightly below .500 in the MAC ... but 3-0 against the Big Ten. Makes total sense, right?

Geoff Collins' first-season struggles in Atlanta were expected, but this one was still a surprise. The Citadel came to Bobby Dodd Stadium and beat the Yellow Jackets with the option offense they had just given up. The Bulldogs rushed for 320 yards and led most of the way, but a late field goal from Tech's Brenton King sent the game to overtime. Crisis averted? Nope. King missed a 46-yarder wide left in overtime, and Jacob Godek connected on the winner.

Mike Houston's first year at East Carolina wasn't particularly fun either, but for two weeks in early November, his Pirates scared a couple of AAC heavyweights. First, they nearly took down Cincinnati. A 35-point first quarter set the tone, and a 26-7 run put ECU in position for an upset. But as the Pirates, up 40-35, were driving to ice the game, Ahmad Gardner picked off a Holton Ahlers pass and took it 62 yards to the house. ECU tied the game with 1:10 left, but Sam Crosa's 32-yarder at the buzzer saved the Bearcats.

Then, ECU forced SMU to score nearly 60 to survive. The Mustangs led 28-10 midway through the second quarter, but ECU kept plugging away, cutting the lead to one point three times but never quite closing the gap. SMU opened the lead back to 59-44 with 4:18 left, but ECU scored once more to force the Mustangs to recover an onside kick. (They did.)

Indeed, poor Tulsa had a shot at a couple of other wild upsets in 2019. Three weeks after the loss to SMU, the Golden Hurricane went on a 17-0 run to turn a 28-17 deficit into a late lead. Memphis' Kenneth Gainwell scored his third touchdown of the game to put the Tigers back ahead, but Tulsa worked the ball down the field and set up a 29-yard field goal attempt. Poor Jacob Rainey pulled it badly left.

Early Notre Dame turnovers -- a red zone interception and a 98-yard Divine Deablo fumble return late in the first half -- meant these teams were tied despite a 238-80 yardage advantage for the Irish. Then things got even weirder, as Virginia Tech took the lead on two field goals. It almost held up, but Ian Book capped an 18-play, 87-yard drive with a 7-yard score with 29 seconds left.

The right team won, but it took quite a while.

After falling in OT to Oklahoma in 2018, the Black Knights again nearly upset a heavyweight, this time in Ann Arbor, Michigan. The Black Knights stuffed two fourth-and-short attempts in the fourth quarter and set up a 50-yard field goal attempt at the end of regulation. It fell short, however, and in the second overtime, after Michigan's Jake Moody gave the Wolverines the lead, Kelvin Hopkins Jr. got sacked and fumbled. Josh Uche recovered, and the Wolverines survived.

Minnesota would eventually make a run at a Big Ten West title and top-10 finish, but first, the slow-starting Gophers had to survive a run of upset bids. After edging South Dakota State in the season opener, they found themselves in firefights with both Fresno State and Georgia Southern.

In Fresno, California, they sent the game to overtime with a 20-yard score by Chris Autman-Bell in the final minute of regulation and won on a 37-yard field goal by Michael Lantz and an end zone interception by Antoine Winfield Jr. Back home against Georgia Southern, the Gophers watched an early 21-10 lead fall by the wayside.Rashad Byrdgave the Eagles a 32-28 lead with a 44-yard fumble return with 3:47 left, but Minnesota responded with a 13-play, 75-yard drive. Game MVP Tyler Johnson caught a 2-yard pass from Tanner Morgan with 13 seconds left, and Minnesota held on.

EMU has made a habit of beating a Big Ten team and then immediately suffering a series of letdowns against lesser competition. That's exactly what happened here, as a week after the Illinois win, the Eagles returned home, took a 28-15 lead early in the fourth quarter, and then let Central Connecticut score twice to take the lead. A Tre Jones interception appeared to seal the upset for the Blue Devils, but they still had to punt. What happened next was one of the most thrilling endings of the season.

Throughout this series, I'm featuring a countdown within a countdown -- the 15 best small-school (as in, below FBS) games of the season. Here are the middle five.

Westminster had done it. The Titans had gone on a 27-7 run to overcome a 16-point second-half deficit, going ahead on a 40-yard Keano Grice run with 3:49 left. Grove City had driven the length of the field, but Paul Gonzalez had intercepted Josh Ehst's fourth-and-goal pass with 12 seconds left to ice the win.

Only, after an unsportsmanlike conduct penalty, Westminster took over at its 1. Unable to simply kneel the ball, the Titans attempted a handoff. And fumbled. Grove City recovered, and on the game's final snap, Ehst scored. 43-41. Biggest stomach-punch loss of the year.

Against Division III's seventh-ranked Wartburg, Central College piled it on, taking a 49-14 lead just six minutes into the second half. Eleven minutes later, however, it was 49-42. Then, Wartburg completed a shockingly easy comeback with an 11-yard JoJo McNair score with 5:25 left. Wartburg took the lead in the first overtime, but after failing on seven straight possessions, Central responded with both a Hunter Robinson touchdown and a Robinson 2-point conversion. Why win the easy way when you can make it really, really difficult instead?

Start with one of FCS' most celebrated rivalries, played in front of a listed 68,314 in the Superdome. Then sprinkle in some stakes -- the winner would play in the SWAC title game. Now add special-teams chaos. Jarod Sims' 36-yard run put Southern up 30-28 early in the fourth quarter, but Grambling batted away the PAT to open the door for a game-winning field goal. Tamaurice Smith blocked the first one with 9:04 remaining, and when the G-Men got one last chance from 40 yards with 10 seconds left, Dakavian Champion blocked that one. Southern somehow advanced.

When you fall down the small-school football rabbit hole, you find yourself streaming video from places like Wheaton, Illinois' McCully Stadium, watching a Division III playoff game decided by A) 280-pound center Zach Hibben scoring a touchdown, B) Hibben spiking the ball and getting penalized, and C) kicker Griffin Bowes missing the game-tying PAT twice, (d) all with a train slowly rolling past the stadium.

Two of the most explosive offenses in the county met in the Division II quarterfinals, and it got wild in a hurry. The first quarter alone featured touchdown passes of 57, 70 and 85 yards, and Slippery Rock led 49-31 at halftime. 49-31! AT HALFTIME! It was 59-38 with 16 minutes left when Notre Dame made its move. The Falcons went on a 21-6 run and got the ball back with a chance at the lead. But on fourth-and-long with 1:15 left, a hurried Chris Brimm was picked off by Shane Schuback, and The Rock survived. 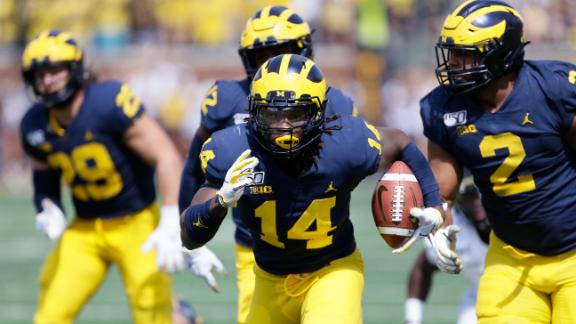 Michigan survives 2OT scare against Army
No. 7 Michigan struggled on offense all game but was able to pull out the 24-21 victory in double overtime. 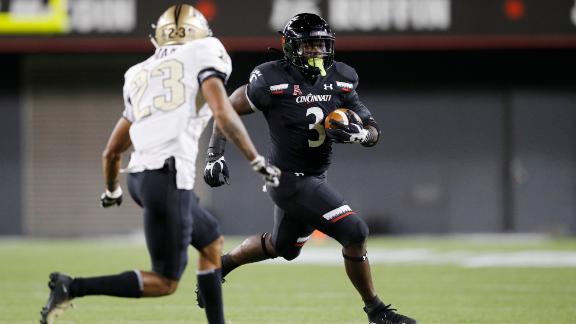 Cincy dominates the 2nd half to upset UCF
Cincinnati holds on for the 27-24 victory vs. No. 18 UCF as the Bearcat faithful storm the field. 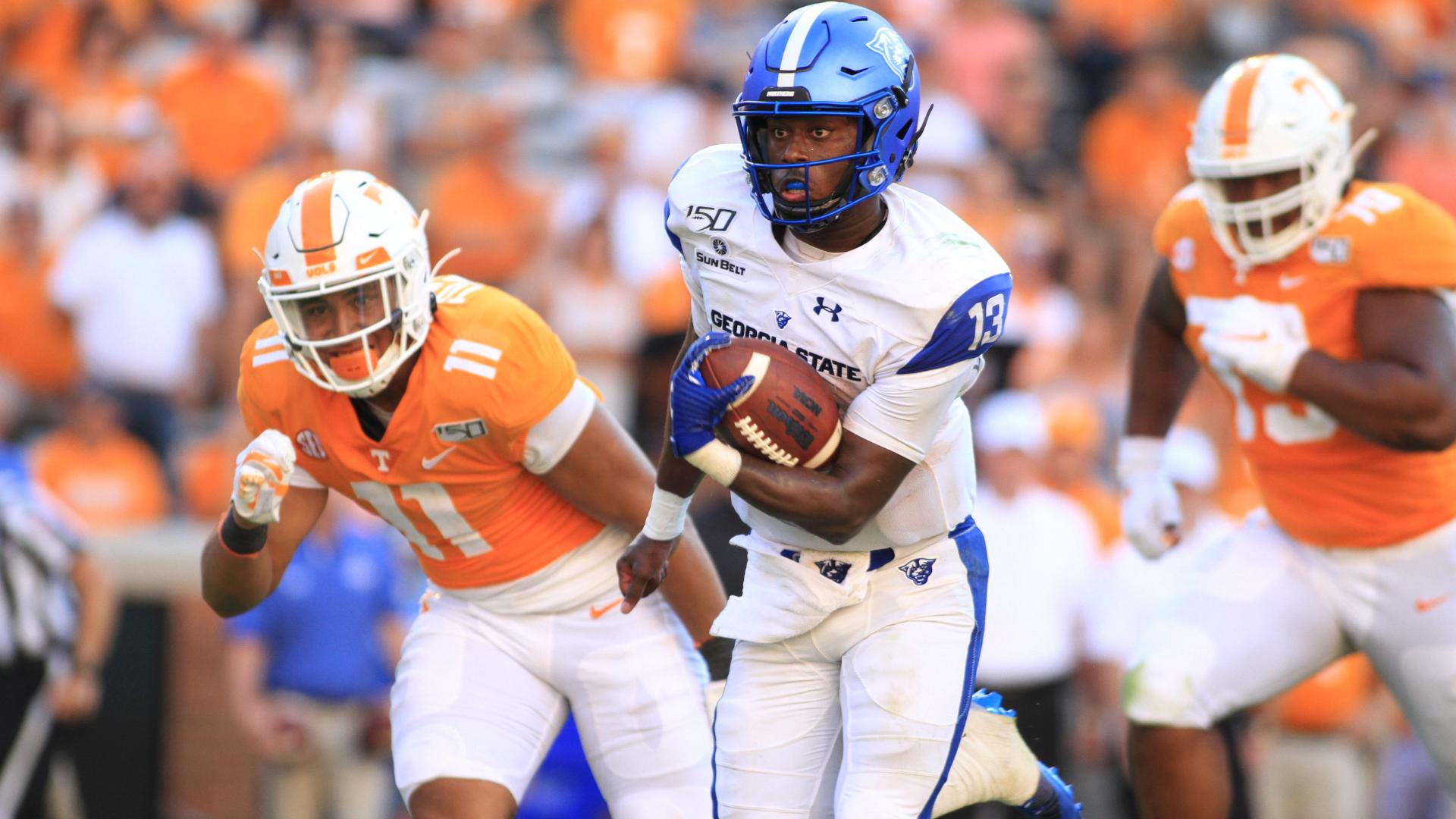 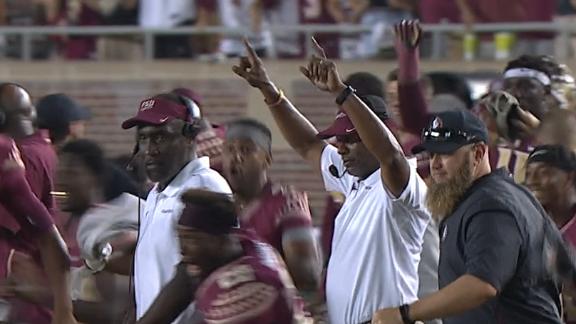