Cowboys QB Tony Romo out for season after injuring collarbone vs. Panthers 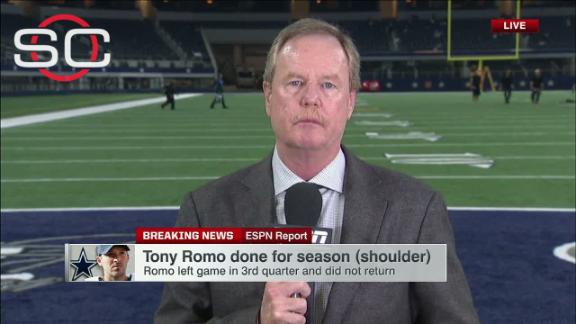 While X-rays on Romo's reinjured left collarbone were inconclusive Thursday and the Cowboys have planned more tests for Friday, the quarterback is "done for the season," a source close to Romo told ESPN's Ed Werder.

Romo will have a CT scan Friday after he was forced from Thursday's 33-14 loss to theCarolina Pantherson the final play of the third quarter.

The 35-year-old quarterback said the feeling he had after being sacked by linebackerThomas Daviswas "similar" to what he felt when he broke the collarbone in a Sept. 20 winover thePhiladelphia Eagles.

"Going to the ground you could hear something happen," Romo said. "You're just disappointed and feel like I don't know what is going to happen. We'll see."

On Romo's previous two collarbone breaks, X-rays were able to show the fractures. Owner and general manager Jerry Jones said Romo suffered six or seven breaks in the collarbone from the hit against Philadelphia.

Davis landed on top of Romo, driving the quarterback's shoulder into the artificial turf. Up to that point Romo was having a miserable game, with two of his three interceptions returned for touchdowns in the first half.

Romo missed seven games after breaking his collarbone against the Eagles. He missed the final 10 games of the 2010 season when he broke the same collarbone in a loss to the New York Giants.

"You're always chancing it when you come back," said Romo, who said last week the chances of another break were high. "The hard part is playing when you're trying not to get hurt, which is silly. You can't do that. We knew that was part of it. Collarbones happen like that all the time. That's part of it. I'm disappointed in costing our team a good chance to stay in the game early. ... It's just a disappointing day."

Romo has not had surgery on the collarbone after his previous breaks. Surgery earlier this year would not have accelerated the healing process. He was able to practice with the scout team after six weeks and returned to the field Sunday against the Miami Dolphins, completing 18 of 28 passes for 227 yards with two touchdowns and two interceptions in a 24-14 win.

"We wouldn't let Tony play if he wasn't ready to play physically," Garrett said. "There is no evidence we brought him back too soon. We'll look at what the tests say [Friday], and we'll make the evaluation going forward."

Without Romo, the Cowboys will turn to Matt Cassel as their starter for the second time this season. Coming off the bench Thursday, he completed 13 of 19 passes for 93 yards and had a 2-yard touchdown pass to Cole Beasley in the fourth quarter.

The Cowboys also have quarterbacks Kellen Moore and Jameill Showers on the practice squad.

Romo was wearing extra protection under his shoulder pads Thursday. The team's equipment and medical staffs sewed a hex-pad into an undershirt Romo wears.

Dallas does not play again until Dec. 7 on ESPN's Monday Night Football against the Washington Redskins. The players are off until Wednesday.

By then they will know for sure about Romo's status for the rest of the season.

"We still have a lot to learn on Romo," Jones said. "It's in the same shoulder ... so that is a concern from the standpoint of the games ahead. We just need more information."

Report: Romo out for remainder of season
Ed Werder reports that Cowboys QB Tony Romo is likely out for the remainder of the season after suffering another collarbone injury against the Panthers.