D'Angelo Russell, Lakers try to move on from aftermath of video 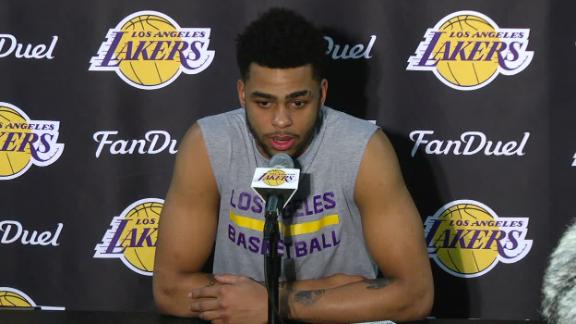 EL SEGUNDO, Calif. -- Lakers rookie point guard D'Angelo Russell said Friday he is moving on from the leaked video that shows him recording a private conversation between himself and teammate Nick Youngbut clarified that the situation will linger until Young has healed and moved on himself.

"I'm getting over it," Russell said at practice. "But if the person that it hurt the most gets over it, then I feel like it's done. Until he lets it simmer down, then I think it will still be an issue."

The video, which is believed to have come to light last week via the Twitter account of a celebrity gossip site, shows Russell filming Young while asking questions about Young being with other women than his current partner. Young and Australian rapper Iggy Azalea announced their engagement in June.

As ESPN reported, a rift developed between Russell and his teammates after the video went public. Despite reaching out to Young to apologize, Russell said he is giving Young space to cope with the incident and understands he can't force their friendship to be mended.

"It's at the point where you need your space," Russell said. "You can't force peace. You have to let time heal it."

Some have suggested that the situation might have been handled differently, possibly with a physical altercation or enforcement, had it happened in a previous era.

Russell, though, said he wouldn't back down if teammates physically confronted him.

"I would get physical back," he said. "It's a point where you try to solve it the right way with words, but if we're at the point where there's a sign of disrespect or violence is involved, sometimes you have to let people feel you and let people know, if you disrespect this guy, you know you have to bring it.

"Win or lose, the respect is still going to be there. I wouldn't necessarily say it's gotten to that point or it's there yet, but if it does, you have to deal with the consequences."

Russell, 20, believes the situation also has been magnified because he plays for the Lakers, arguably the NBA's most iconic franchise, in the Los Angeles market.

"If you put a lot of people in this city, around the media and around every incident that can blow up just in 30 seconds, you'll see how many people can break," he said. "You need to have thick skin to survive in this era and in this city."

Before Wednesday's 102-100 victory over the Heat at Staples Center, Russell told reporters there was a "bad vibe" around the team and in the locker room.

On Friday, his teammates confirmed that the tension had been palpable.

"It was an elephant in the room, especially when those two guys come in the locker room," Jordan Clarkson said. "[Russell] apologized to the team. I'm not sure what he and Nick are doing to handle it out between them, but we felt it. D'Angelo handled it the right way. He looked us in the eyes and apologized."

Added Julius Randle: "It was a little awkward. But we're not trying to focus on it."

Coach Byron Scott said that, while Russell's demeanor has remained unchanged, it's clear he's working as hard as he can to regain the trust of his teammate.

Young, meanwhile, has been acting differently at practice, according to Scott.

"He's been, I wouldn't say standoffish, but he's been probably a whole lot quieter than Nick normally is," the coach said. "I think we all can understand that.

Russell and Young are both under contract through the 2016-17 season. According to Scott, their ability to coexist for at least another year shouldn't be an issue.

"At the end of the day, we're all grown men in here," Scott said. "People make mistakes and you have to understand that and you have to just kind of move on. Now, will they ever be buddy-buddy again? I don't know.

"But they do have to coexist as long as they're both here, and I think they can."

Russell and Young are arguably Clarkson's closest teammates on the Lakers. Clarkson said he has spoken with both of them and believes the Lakers (16-59) actually can rally from this situation and forge a closer bond with one another.

"I feel like it's kind of brought us closer a little bit," Clarkson said. "We're trying to stay strong for each other. At the end of the day, we still come here and have to see each other every day and we have to work.

"We just have to put everything to [the] side and what's happened off the court, and really just come together as a group. I feel like we're doing that."

While Russell claims the incident has provided a valuable learning lesson, his confidence and self-belief hasn't wavered.

"I wouldn't say that," he said when asked if the situation has humbled him. "I'm forever going to have the confidence to speak my mind. I'm the same guy, and I don't think anything can change that."

Information from ESPN.com's Baxter Holmes and Marc Stein contributed to this report.

Russell: 'You can't force peace'
Lakers G D'Angelo Russell says he is getting over the incident with Nick Young but not sure if the issue has simmered down with Young.

Russell: 'I wish I could make things better right away'
Lakers guard D'Angelo Russell addresses the video that created a rift between him and Nick Young. 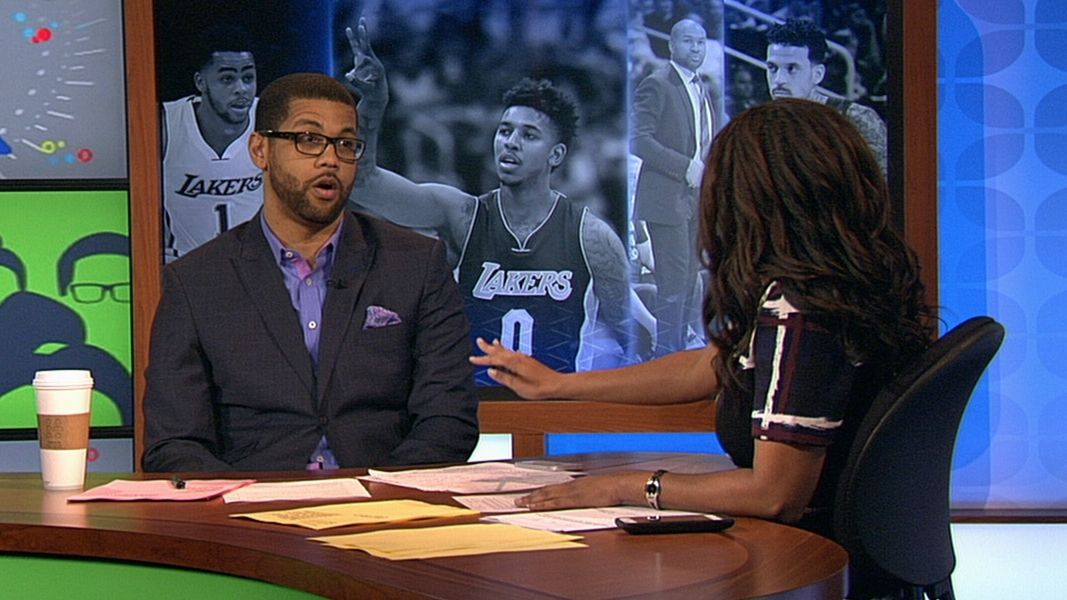