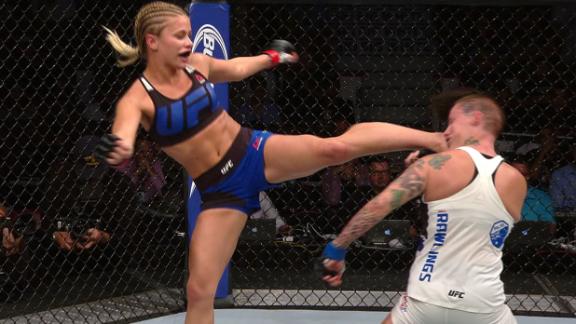 ESPN
By Brett Okamoto
Each week, ESPN.com writer Brett Okamoto provides his take on the hottest topics in the world of mixed martial arts.

This week, Okamoto squares off with former UFC middleweight contender and current analystBrian Stann to discuss all things MMA. Stann (12-6), a former WEC light heavyweight champion, retired in 2013 after a seven-year career.

1.Is women's strawweight contender Paige VanZant a future pay-per-view draw for the UFC?

Stann:Yeah, I think she is. It would take her doing more things on network television, though. It's not going to be just from her fights. When she was doing "Dancing With the Stars," in my regular day job, my employees thought I was really cool because I had met Paige VanZant. That's how big she got by doing that show. I call fights all the time. I come back on Sunday and on Monday, my employees could care less. But Paige VanZant doing "Dancing With the Stars?" They're like, "Do you know Page VanZant? Oh my God, what is she like?" She really rose to prominence on that show. There's something about her. She has that "it" factor and a win like her last one, in a fight she was not winning, to come out of nowhere and land that kick -- she's an athlete, a gamer and she has got the personality.

Okamoto:I think it's too early to tell. Selling pay-per-views isn't easy. At any one time in the sport, there are (maybe) only three or four names that can consistently do so. Does VanZant have a lot of potential? Of course. I'd be hard pressed to find many prospects with more potential than VanZant, but in addition to showing up on other mainstream platforms as Stann said, winning is a major piece to this. Her knockout over Bec Rawlings was spectacular and an example of what she's capable of athletically, but the truth is we still have no idea whether she'll be a champion or not. The chips are falling into place for her to be a PPV draw, but so much more has to happen before she gets there. I'd say her chances are 50-50 -- which, when you consider how rare PPV stars are, that's pretty high.

2.UFC president Dana White has hinted thatJon Jones might be back soon in a fight against Anthony Johnson. With light heavyweight champion Daniel Cormier also ready for a fight, what is the matchup to make?

Stann:I think it's DC vs. "Rumble" [Johnson], and you do a rematch between Jones and Alexander Gustafsson. People have wanted to see that rematch for a long time and it's a fight that would get Alex excited again. Having known Jon, I just think there needs to be something that helps this guy to stop taking things for granted. Regardless of what went wrong or what ends up being proven [with his UFC 200 failed drug test], he ingested something he should have known not to. At this point, people know, "If I'm going to take something, I need to make sure it's clear." Jon continues to cost himself, the sport and the fans -- and I think allowing him to jump right back in and fight for a title, while it's definitely the fight that sells the most, I think for his longevity, he has got to learn from this. It just seems he always finds a way out. Fighters are calling him "Teflon Jon" now. When that happens, you can fall back into that groove where you take things for granted and I'd really like to see Jon not do that.

Okamoto:Yeah. I have to agree with Stann. Stylistically, which fight would I want most? Probably Jones-Johnson. We haven't seen it yet. I would like to see it, just like thousands of others would like to see it. But that's the problem with Jones in the last two years: We don't get to see him fight. Jones has the right to defend himself regarding the failed drug test -- we'll see how that all unfolds. But regardless of what happens with that, I have a hard time arguing against a fight between the champion (Cormier) and a very deserving contender (Johnson) being next. And while the UFC promotes that matchup, I love Stann's idea of a rematch between Jones and Gustafsson. Even Jones has said he wants that fight again. Win, win.

Stann:Yeah, I think it's Stephen Thompson. He has generated a ton of hype behind him. Blasting Johny Hendricks the way he did and then getting a dominant win over Rory MacDonald, maybe not as definitive as the Hendricks win, but Rory has been the next-best guy for some time now and "Wonderboy" [Thompson] handled him very well. I think he legitimately deserves the next shot. The run Maia has been able to put together is incredible but I think it's actually beneficial for him to wait. I think he matches up better against "Wonderboy" than he does against [current champion] Tyron Woodley. He should wait and see what the results are of that fight, maybe he'll end up getting a better stylistic matchup. Maia is a fighter and he's going to try to take out anybody, but with his game, I think it would be much more difficult to do that to Woodley than it would against Thompson. We don't know that for sure, but that's what I've seen on tape.

Okamoto:What Maia has done during this six-fight win streak is insane. It's basically unheard of to fight this level of competition and consistently take essentially zero damage. But all these calls for a Maia title shot -- I think it's people only remembering what they saw last. Thompson, to me, is the obvious choice for No. 1 contender. And that's nothing against Maia, it's just the way it is. In 2016, Thompson has fought the higher-ranked competition and his seven-fight win streak is actually longer than Maia's. I see no issue with Maia waiting if that's what he chooses to do, but as I wrote in a piece earlier this week, I think that's a bit of a gamble. It's always dicey waiting for a title shot, especially in a division that is welcoming back names like Nick Diaz and (potentially) Georges St-Pierre.


Stann: Yes. I think it's an excellent move for him and typically, when guys make moves like this and go looking for a second run at another weight, I look at how many miles they have on them. I don't think Anthony has a lot of miles on him. He had some injuries, but those can be bad luck. I thought he was fighting bigger guys for a long time. Cutting down to 145, he's the same size he was at 155. I watched him warm up and talked to his camp. His coach, Duke Roufus, told me he's hitting just as hard at this weight and he's fast. What hurt him at 155 was that guy who could hold him against the fence and wrestle him, neutralize him. That's going to be a lot harder to do at this weight. And when you look at the elite guys at 145 -- Conor McGregor, Max Holloway, Jose Aldo -- that's not their game. That's not what they do. They typically prefer to stand and strike.

Okamoto:Tough one. I'll side with Stann and go, "Yes." Pettis is such a skilled fighter, how can you bet against him? His path to a title shot won't be a long one -- nor should it be, really. The UFC will move him through the line quickly based on his name value and even though he did hit that 0-3 skid at 155, he'd be deserving of a featherweight title shot with perhaps as little as one more win. Holloway shouldn't lose his place in line, but it's hard to not get excited about a potential fight between Pettis and Aldo -- or McGregor, if the champ stays in the division.

5.Condit has publicly stated he's considering retirement. Should he do it? What is the most memorable moment of his career to date?

Stann: I've got no issues with Carlos retiring. He has been fighting for a long time. Once a fighter starts to think about it, it's typically a good idea to hang it up. I think we have a tendency to try and stretch our careers too far. Carlos is a really bright guy who will have a lot more to do in life than fight. He'll be remembered as one of the very best of the welterweight division and one of the most fun fighters to watch, ever. The moment that sticks out to me was when I called his fight against Thiago Alves [in May 2015]. He was coming off a substantial layoff after he hurt his knee and he was rusty. It was one of those fights where I was saying, "Alves looks sharp. Carlos just might not be able to turn the ignition tonight." Then in typical Condit fashion, he lands a lead elbow that basically sends Alves' nose up into his forehead. Carlos ends up winning and you see his face is covered with another man's blood and he's smiling. He's looking out over the crowd, screaming, blood all over his face. That's Carlos in the Octagon. Outside of it, he's nice as can be. Inside, he's a savage.

Okamoto:No opinion, really, on whether it's time for Condit to hang them up. His ability to take a punch doesn't appear compromised, so he's not in jeopardy of becoming one of those fighters you're actually squeamish to see take a shot. If his fire has gone out, then by all means, thanks for the memories, best of luck in the next chapter. I have a hard time believing Condit will leave the sport off of that fight -- a loss to Maia that was so quick it barely felt like a fight had taken place at all. I could certainly see him being very selective when it comes to accepting an opponent, though. It has to be a motivating fight in some way. Best Condit moment? The Dong Hyun Kim flying knee knockout stands out as his best finish. That moment was made for a poster on a kid's wall.

VanZant presents: Kicking with the Stars
Coming off her second-place performance on "Dancing with the Stars," UFC strawweight Paige VanZant lands a jumping kick to the head of Bec Rawlings, sending her to the mat where VanZant finishes her off with a series of punches to the head.
Related topics:
sportsespnmmademian maiapaige vanzantdaniel cormiercarlos conditjon jonesstephen thompsonufcfive roundsanthony johnsonbrett okamotoanthony pettisbrian stann
Copyright © 2020 ESPN Internet Ventures. All rights reserved.
More Videos
From CNN Newsource affiliates
TOP STORIES