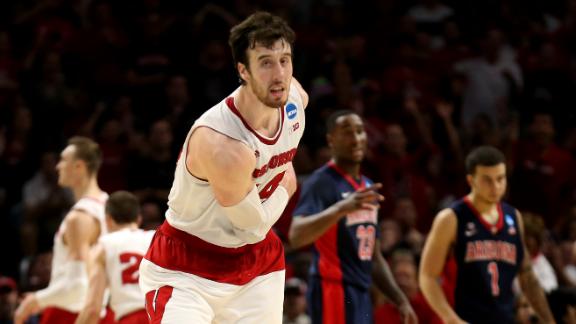 The John R. Wooden Award presented to the nation's most outstanding college basketball player revealed its five finalists on Monday, three of which are on teams still playing in the NCAA tournament.


Wisconsin Badgers center Frank Kaminsky and Kentucky Wildcats junior forward Willie Cauley-Stein made the cut and will meet on the court during Saturday's national semifinal game.

Center Jahlil Okafor helped power the Duke Blue Devils to the Final Four, leading the team with 17.4 points and 8.6 rebounds.


Kaminsky, one of the most versatile centers in the nation, led the Badgers with 18.7 points and 8.0 rebounds this season. Cauley-Stein doesn't have huge numbers given the Wildcats depth - he averaged 9.1 points and 6.5 rebounds - but when plays are needed he's made them.


Grant was the key to Notre Dame's high-octane offense that ranked No. 2 in efficiency according to Ken Pomeroy. He averaged 16.5 points and led the ACC with 6.5 assists per game.


Russell, who joined Okafor as the only freshmen on the finalist list, was one of the nation's most prolific scorers. He led the Buckeyes with 19.3 points per game.


The winner will be announced April 10 at 8 p.m. ET on ESPN2 on as part of the inaugural College Basketball Awards Show Presented by Wendy's.