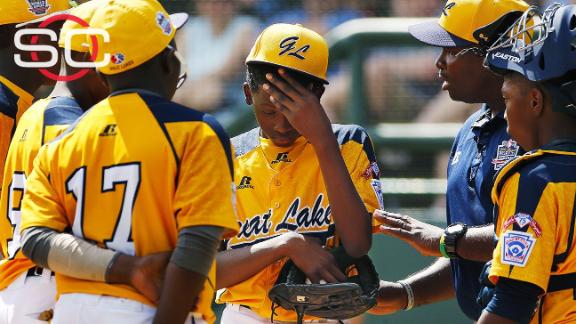 CHICAGO -- A former Chicago Little League team announced a lawsuit Wednesday against the sport's governing body, accusing it of improperly stripping the young athletes of the national title that made them hometown heroes and nationally known and refusing to provide the information used to make the stunning decision.

The attorney for Jackie Robinson West said during a news conference that he believed some of what Little League International has claimed -- that some of the players did not live within local league boundaries. But he added that he thought the team was unfairly singled out for scrutiny, in part, because all of its players are black.

"Do I think race is at play? Yes, I do think that it's at play at some level," said Victor Henderson, as members of the team and their parents and coaches sat and stood behind him. "Do I think that's the only reason? No, I do not."

The lawsuit is the latest chapter of what started as an uplifting and inspirational story about the South Side Chicago team and how it defeated opponent after opponent last summer, including Las Vegas, to capture the national crown at the Little League World Series. It fell to South Korea in the world championship game.

Fans in Chicago turned out by the thousands to watch the games on large screens. And when it was over, the players were treated to a massive parade downtown, a trip to the White House to meet President Barack Obama and another trip to San Francisco to watch the World Series.

Then in February came the announcement that Little League International was stripping the team of its title, suspending its manager and suspending the team from Little League tournament play until the local league replaced its president and treasurer after determining the boundaries of the league had been falsified so that ineligible players could be added to the roster.

Henderson, who was hired by Jackie Robinson West to conduct an investigation, said his efforts have been stonewalled by Little League International.

Henderson said he did speak briefly with a Little League attorney but was never given any information of substance. Little League International did not immediately respond to an email from The Associated Press seeking comment.

Henderson said his own research does suggest that some of the players did live outside the boundaries, but that if it happened it was because of "some mistakes" related to confusion about shifting boundaries and wasn't the result of an effort to sneak ineligible players onto the team.

He did not address Little League International's claim that Jackie Robinson West officials did not only change the boundaries but also scrambled to persuade surrounding leagues to go along with what they had done.

But Henderson did say Little League International violated its own rules that call for it to review eligibility paperwork "before every game" and require eligibility protests to be filed before games.