Jadeveon Clowney to go on IR 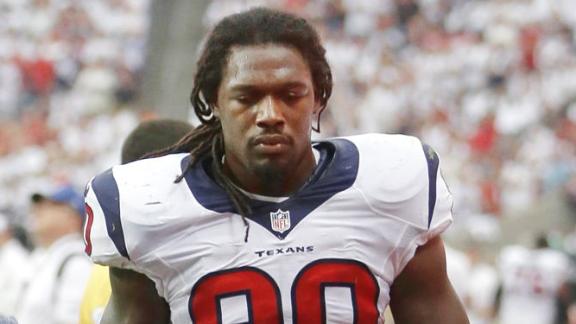 After meeting with renowned orthopedic surgeon James Andrews on Wednesday, it was determined that Clowney needs a second surgery on his right knee, Texans coach Bill O'Brien said Thursday. The Texans will place Clowney on season-ending injured reserve.

O'Brien declined to say what kind of surgery Clowney was having or who will perform it.

"He wants to play football. He wants to be good so I think he was disappointed right off the bat," O'Brien said. "But I think he understands what he has to do and why this is necessary and he knows that he has to rehab hard and get back out there."

The outside linebacker had sports hernia surgery in June, shortly after signing his rookie contract. In August, Clowney suffered a concussion during a practice with the Denver Broncos. He was ready for the beginning of the season but tore the meniscus in his right knee in the first half of the Texans' opener. He had arthroscopic knee surgery the next day.

After missing six games, Clowney, 21, tried to return, but his knee never quite felt right.

"A lot of pain right now, just been bothering me off and on the whole season," Clowney said on Thanksgiving. "Something I've got to push through, but when the swelling comes up, it's a little setback."

Clowney played four games in his rookie season, amassing a season-high 49 snaps two weeks ago against the Cincinnati Bengals. After the game, he experienced a great deal of swelling in his knee.

"Evidently that's what needs to be done to try to get him healthy," defensive coordinator Romeo Crennel said of the surgery. "That's what we need to do -- to hope that he can get healthy. Because when he's healthy, we know what he's capable of."

Houston will continue relying on Whitney Mercilus to fill in for Clowney on Sunday at Jacksonville. Mercilus, who was the 26th pick in the 2012 draft, has started 10 games this season and has 43 tackles, four sacks and a forced fumble.

"Whitney has really done a good job this year," O'Brien said. "He's a very improved player ... I think this guy has worked extremely hard to try to become a better player. I think you've seen that on the field."