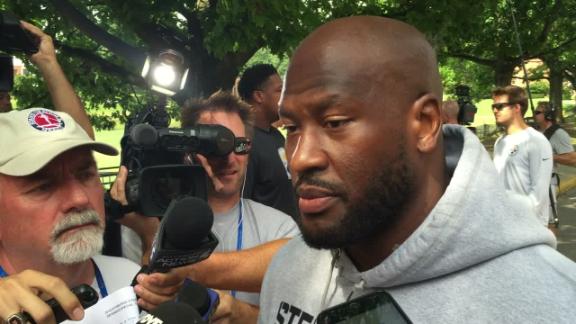 LATROBE, Pa. -- James Harrison is open to talking with the NFL about steroid allegations made in a Al-Jazeera America report.

"I don't have a problem doing the interview. Come to my house. Bring Roger (Goodell) with you," Harrison said.

But Harrison's problem is the precedent set by the league to investigate whatever they want, the Pittsburgh Steelers linebacker told reporters after Tuesday's walkthrough at Saint Vincent College.

Harrison, Green Bay Packers linebackers Clay Matthews and Julius Peppers and free agent linebacker Mike Neal face discipline -- including suspension -- if they don't cooperate with the league by Aug. 25, NFL vice president for league policy and external affairs Adolpho Birch stated in a letter sent to the NFLPA on Monday and obtained by ESPN. All four players were linked to the Al-Jazeera report, but the NFLPA contends there's a lack of evidence after the key source in the story, Charlie Sly, recanted his statements to the media outlet.

Harrison said he hasn't had a chance to read the NFL's letter but will follow the advice of the attorneys at the NFLPA, which has declined to comment on the deadline.

When asked why not get the interview over with, Harrison was blunt in his response.

"If that's the case, then somebody could come out and say James Harrison is a pedophile," Harrison said. "They are going to suspend me, put me under investigation for being a pedophile just because somebody said it? I'm not going to answer questions for every little thing some Tom, Dick and Harry comes up with."

Harrison enters his 14th NFL season at age 38 and makes clear he wants to play but is considering all his options based on principle.

Harrison said he's "definitely" prepared to sit if it's the right thing to do.

"I'll do what I have to do. They'll do what they have to do," said Harrison about the NFL. "We'll make that decision when that time comes...I just am doing what I'm advised to do (by the NFLPA). It's the right thing to do."

Harrison believes the league has not followed all the appropriate channels to launch an investigation. The NFL-NFLPA drug substances of abuse policy requires "sufficient credible documented evidence" in order to discipline. But with lack of cooperation from players, the league says it plans to suspend over 'conduct detrimental.'

Harrison admits the Steelers factor into this, even though coach Mike Tomlin said the investigation has "nothing to do with us."