Judging Week 3 NFL overreactions: Is Mitchell Trubisky done in Chicago? How bad is the NFC East? 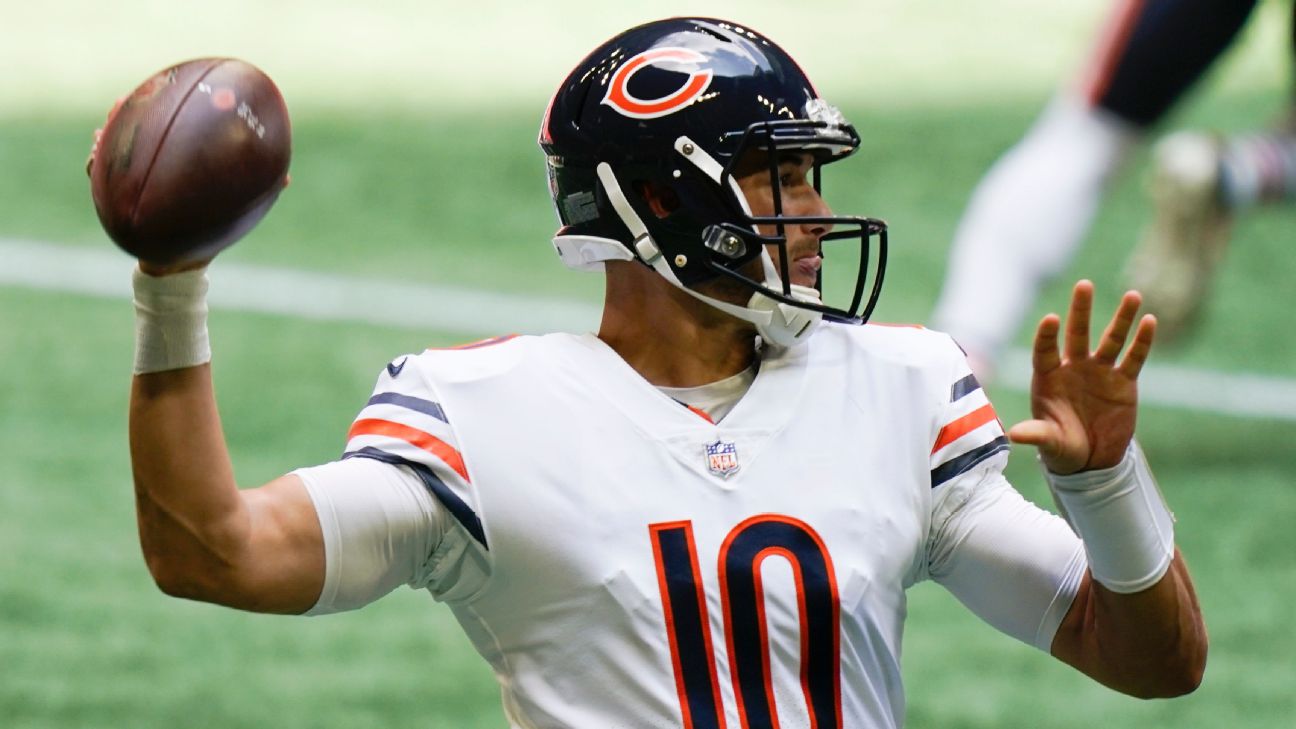 It felt as if Bears coach Matt Nagy overreacted Sunday when he yanked starting quarterback Mitchell Trubisky from the game and put in Nick Foles. Sure, Trubisky hadn't been great against the Falcons. And he'd just thrown a drive-killing interception. But we've certainly seen him look worse, and besides, the Bears were off to a 2-0 start with Trubisky under center.

By the time Foles went into the game, I'd begun thinking about the weekly overreactions column and all I could think was that Nagy was trying to bigfoot me. Here he was overreacting before I even opened my Word document!


But then I looked again, realized whom the Bears were playing, and decided this had a chance to look real good for Nagy. Which, in the end, it did.

It didn't start out great, as Foles' first drive ended with his own interception. But the accommodating Falcons kept giving him the ball back quickly, and Foles took advantage. He led the Bears back from a 26-10 fourth-quarter deficit with three touchdown passes against Atlanta, which blew a 15-point fourth-quarter lead to the Cowboys a week earlier. Trubisky watched from the sideline, probably excited that the Bears won the game but also having to wonder whether he'd just lost his job.

The Bears have to be the weirdest team in the league right now. They're 3-0 and have no idea who their quarterback is. They came back from a 23-6 fourth-quarter deficit against the Lions in Week 1. They nearly blew a 17-0 lead to a horrendous-looking Giants team in Week 2. And then this.

So where better to start this week's overreactions than in Chicago, where Nagy looked like he was trying to get the jump on us but in fact was just making the right gut call at the right time:

Mitchell Trubisky has started his last game for the Bears

If Trubisky's performance was the reason for Sunday's benching, it's hard to see how what followed would change Nagy's mind. After the interception, Foles looked like his old Eagles Super Bowl MVP self. He finished 16-for-29 passing for 188 yards and three touchdowns. He figured out how to find Allen Robinson, his best receiver, pretty much every time he needed to. He was, for one brilliant quarter, everything the Bears want and need their quarterback to be if they're going to contend for an NFC playoff spot. If you were sick of Trubisky in the third quarter, you were all-in on Foles in the fourth.

The verdict: OVERREACTION. Surely, Foles will start next week against the Colts. But he's a career backup who hasn't always been the picture of health and has lost starting quarterback competitions on four different teams -- including his current team less than a month ago.The Bears' coaching staff thought enough of Trubisky's progress by the end of August that they gave him the job over Foles.

And here's the big thing: Foles didn't do anything Sunday that Trubisky didn't do against the Lions in Week 1! Who's to say that full-game Foles is going to look like fourth-quarter Foles did Sunday? Yes, the Bears will try it. But his history indicates that at some point they'll have to at least consider going back to the No. 2 pick in the 2017 draft.

I stand by my preseason prediction that each of these guys starts at least six games for the Bears this season. Trubisky is halfway there. How close will Foles get before they switch back? And a better question: If they keep winning all of their games, does it matter?

The NFC East is worse than ever

When all the divisions are on the playground, the NFC East is the one everyone else makes fun of. "Your division's so bad, the team that had the best day Sunday tied the Bengals!" Sick burn, other divisions, but the truth hurts.

The Eagles called and executed plays in the final moments of overtime against the Bengalswithout trying to win -- content to tie one of the league's worst teams even after a last-minute regulation comeback from their embattled quarterback -- and still gained a half-game on every other team in the division.Washington and Dallas are tied for first place at 1-2. The only two wins the NFC East has through three weeks are (1) against another NFC East team and (2) against the Falcons, who basically use only nine guys on defense in the fourth quarter.

The verdict: NOT AN OVERREACTION.I'm not ready to say the NFC East champion won't have a winning record -- the 2002 AFC North ended up with two teams over .500, and one of them was the Browns -- but it's not impossible.

The Cowboys have allowed 78 points over the past two weeks, and their only win was a historic miracle. The Washington Fumble Team came back to beat the Eagles in Week 1 but has turned the ball over seven times in the two games since. Eagles quarterback Carson Wentz has three touchdown passes and six interceptions and hasn't hit 50.0 in Total QBR in any of his three games. And the Giants just lost 36-9 to a team composed almost entirely of 49ers backups.Not sure if the math works this way, but it's possible that if you can't beat a team's backups, you can't be considered one of the top 32 teams in the league.

It's ugly out here in these NFC East streets, and none of these teams has even had to play the Ravens yet. (And they all will.)

Again, the Giants lost by four touchdowns to a team missing at least nine starters, and there's a legitimate debate in New York about which team is worse. Gase made the playoffs in 2016, his first year as Dolphins coach, but he's 20-31 since, and it's safe to say his reputation as an offensive mastermind has taken some hits.

No team gained fewer yards last season than the Jets, and only Washington scored fewer points. The Jets entered Sunday last in the league in yards and added only 260 in theirblowout loss to the Colts. Their 37 points through three games so far is the lowest total in the league -- one point behind those aforementioned Giants. And perhaps the most damning case against Gase is the way guys like Ryan Tannehill, Kenyan Drake, DeVante Parker and Robby Anderson have played since they parted company with him.

The verdict: NOT AN OVERREACTION. The Broncos team the Jets play Thursday is also 0-3 and has scored just 40 points. But Denver had to play Sunday without its injured starting quarterback and its best wide receiver. The Jets, yes, are extremely banged up at receiver, but even so, the third year of Sam Darnold was supposed to be one in which he showed real progress. Sunday, he was 17-for-29 passing for 168 yards, a touchdown and three interceptions, two of which were returned for touchdowns.

The Jets traded up and took Darnold No. 3 overall in the 2018 draft, and they have a fifth-year option decision to make on him this spring. He needs to show growth if they're going to commit to him beyond 2021, and if they end up with the first pick in the draft, their fans will want them to take Clemson's Trevor Lawrence and start over again at the position. This is not a good spot for a coach to occupy.

ESPN's Chris Mortensen reported Sunday morning that ownership was growing restless and Gase's seat was getting hotter. If the Jets are 0-4 after Thursday night, they have 10 days before their next game and time to make a change if they want to. Jets defensive coordinator Gregg Williams went 5-3 as interim coach of the Browns after they fired Hue Jackson two years ago -- just sayin'.

It's panic time for the 0-3Houston Texans

Deshaun Watson's crew made a game of it Sunday but couldn't hold on against Pittsburgh, and the Texans are 0-3 for the second time in three years. Tennessee leads the AFC South at 3-0, followed closely by 2-1 Indianapolis, and both look like legitimate contenders. After an offseason in which coach/general manager Bill O'Brien caught a lot of heat for trading away top wide receiver DeAndre Hopkins over a contract dispute, the slow start isn't helping anyone give him the benefit of the doubt.

The verdict: OVERREACTION. Remember a couple of seconds ago when I said the Texans were 0-3 for the second time in three years? Yeah, well, they recovered and won the division in 2018. And they've won it four of the past five years. You can bang on O'Brien's GM decisions if you want, but as a coach he has shown an ability to make the playoffs.

The Texans still have the best quarterback in the division, Ryan Tannehill's sizzling start notwithstanding. And it's entirely possible that the three teams they've played so far -- Kansas City, Baltimore and Pittsburgh -- are the three best teams in the entire league. What did they do to get the schedule-makers so mad at them? Swear, when I checked their schedule while writing this, I half-expected their next two games to be against Buffalo and Seattle. They are not.

The Texans are unquestionably through the toughest part of their schedule. They still have two games against each of their division opponents. There are seven playoff spots in each conference this season. And they've been here before. It's too early to panic in Houston.

Drew Brees is part of the problem in New Orleans

The Saints lost to the Packers on Sunday night to fall to 1-2, six days after they lost to the Raiders in Las Vegas. Their 41-year-old quarterback looked sharper than he did in Week 2, but he still seemed reluctant to take shots downfield, and running back Alvin Kamara did the bulk of his yardage work for him after the catch. Kamara had 57 yards after the catch on his 52-yard touchdown catch. Think about that. Brees came into the game averaging 4.81 air yards per attempt, and Sunday night he averaged 4.61. Those are really low numbers, and they're moving in the wrong direction.

The verdict: OVERREACTION. This was a close one, but I'm giving the future Hall of Famer the benefit of the doubt. Brees isn't going to win games on arm strength at this point. No shame in that. If he can be accurate and smart and operate the offense in rhythm, he has enough brilliant players around him to make it work. Michael Thomas, who set an NFL record with 149 catches in a season a year ago, has missed the last two games due to injury and should be back soon. Tight end Jared Cook left Sunday's game in the first half with an injury.

The Saints' 25 penalties for 336 yards this season feel like a bigger reason for their current predicament. Once the rest of the Saints' offense is whole, we should see a better and more consistently sharp Brees, and a New Orleans team that recovers from its 1-2 start and contends for the NFC South title as we all expected. I could be wrong, but I think, given the circumstances, that it's too soon to give up on Brees in 2020. 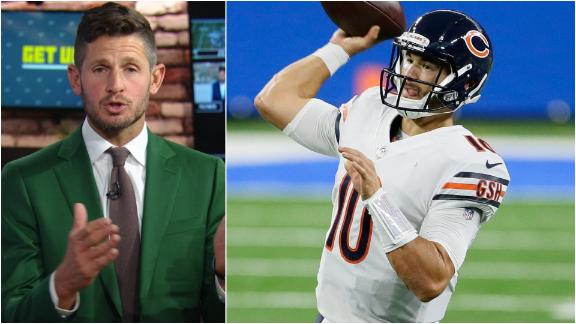 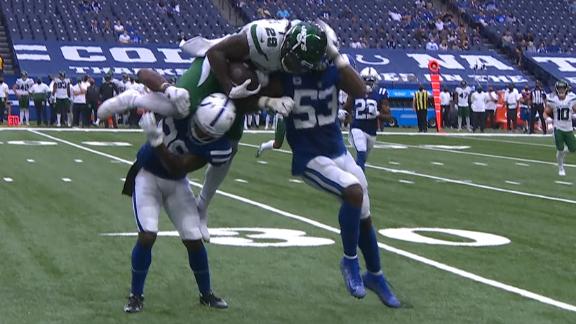 Ballage's hurdle attempt doesn't go as planned
Jets RB Kalen Ballage tries to leap over a Colts defender, but he takes two big hits instead and is stopped in his tracks. 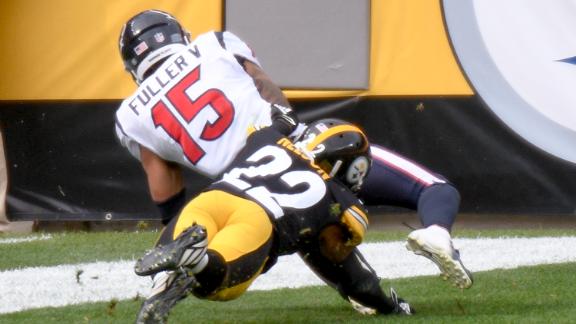