Matt Ryan: Owner 'has my back' 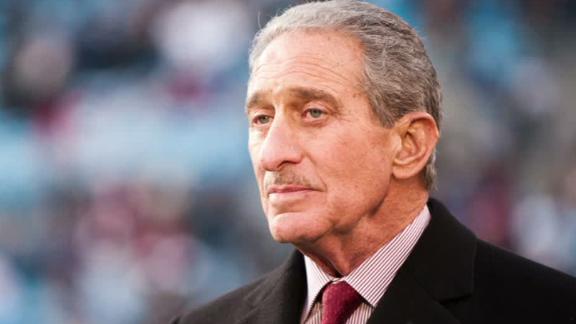 Matt Ryan refused to criticize his teammates for not coming to his defense in last year's season opener, but the Atlanta Falcons quarterback understands why the incident annoyed team owner Arthur Blank.

Ryan appeared on 680 The Fan radio's "Front Row" show Friday morning in Atlanta and discussed the play during which he was hit by New Orleans Saints rookie safety Kenny Vaccaro while sliding to the ground. Blank was a guest earlier in the week and told the station it bothered him that none of Ryan's teammates got in Vaccaro's face after the play.

In reflecting on the Sept. 8 incident, Blank said, "And that play really bothered me, sincerely. It bothered me that none of our players, they all complained, but none of them went to the safety on the Saints and did anything. Not that they would start a fight, but just kind of put their finger in his chest saying, 'That's not acceptable.'"

Blank went on to say new assistant general manager Scott Pioli also was bothered by the players not having Ryan's back and viewed it as symbolic of the mentality of the team.

Ryan said the Falcons' public relations staff made him aware of Blank's comments. He was asked Friday if it entered his mind that no one had his back.

"No," Ryan responded. "From a player's perspective, listen: I was trying to breathe. You get the wind knocked out of you, and when you're in that position, when you can't breathe, you stop thinking about all the other crap that's going on out there, and you're just saying, 'All right. Get some oxygen in my lungs.' I didn't think twice about it. We got the 15-yard penalty. We're trying to go down and put points on the board. As a player and as a quarterback, you have to be so focused on executing and doing your job. And so for me, I didn't worry too much about it.

"I understand where Arthur is coming from. I understand that he has his opinion and that's the way that he feels. And I appreciate that from him because he has my back. And I respect that. But I also understand, from the player's perspective, how you play the game and Smitty [coach Mike Smith] all the time preaches to us that there's a line and you've got to play on that line, but not over the line. And you've got to play smart. In that situation specifically, a penalty or something like that when we're in the red zone, we're going down to score points, that can change the outcome of the game."

Based on video, offensive tackle Lamar Holmes seemed to be the only Falcon who said something to Vaccaro after the hit.

"I understand where Arthur is coming from," Ryan repeated. "I appreciate it because he does have my back. And I love that about him. But for me, it's not something that I'm losing sleep about this time of the year."