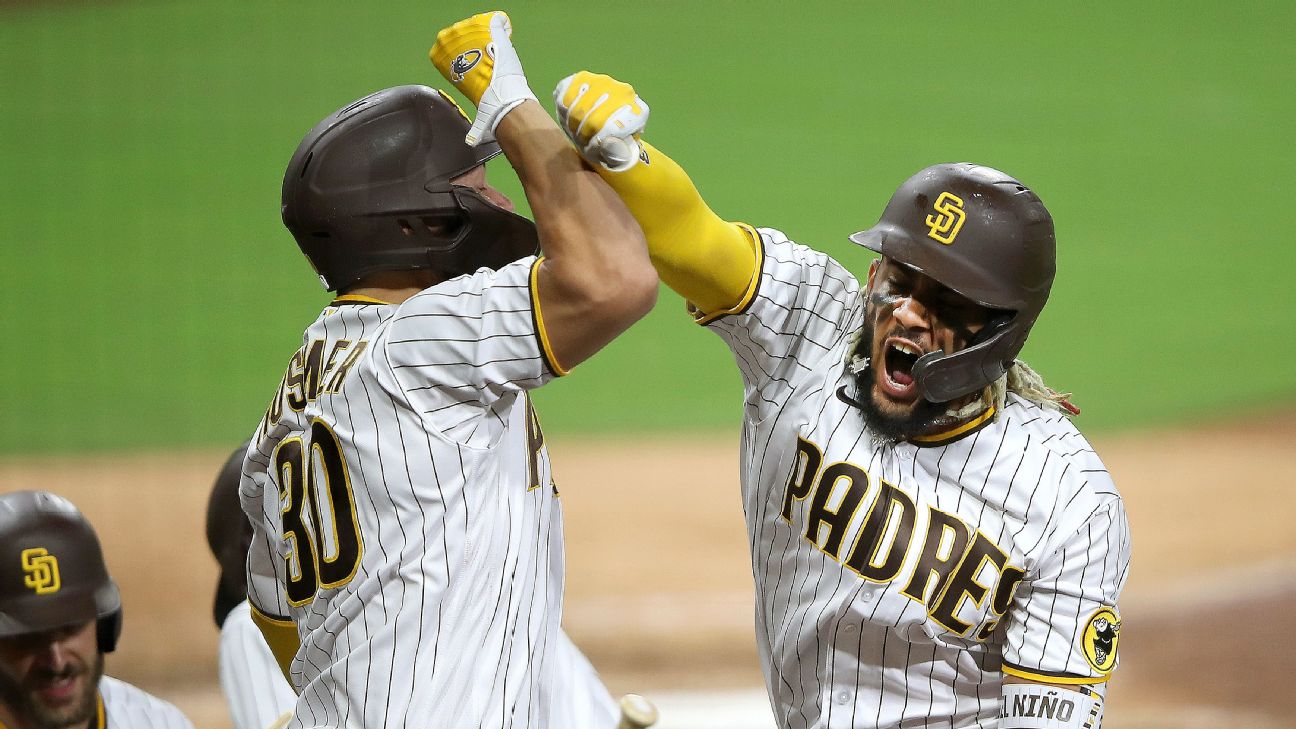 It was win-or-go-home time across the MLB playoffs Thursday on a day that could have seen as many as four teams sent packing. (Three ended up being sent home.)

From the day's opening Cincinnati Reds-Atlanta Braves matchup to the late-night Milwaukee Brewers-Los Angeles Dodgers Game 2 in L.A., here are the heroes, turning points and takeaways from each of Thursday's games.

Game 2 hero: Fernando Tatis Jr. homered the Padres back into the game, then bat-flipped his way into history. The 21-year-old became the third-youngest player in MLB history to hit a pair of home runs during a postseason game, helping salvage San Diego's season in an 11-9 victory that forces a winner-takes-all Game 3 against St. Louis on Friday. Prior to his fourth at-bat of the game, Tatis had left 10 runners on base in the series, continuing his struggles from the regular season. Those went away with his titanic three-run shot in the sixth inning, which served as a prelude for an opposite-field homer in the seventh that he capped with a majestic, end-over-end lumber launch.

What it means: Welcome back, Slam Diego. With no Mike Clevinger and no Dinelson Lamet on the mound, the Padres went back to their 2020 roots: the home run. Tatis' first home run pulled them out of a 6-2 deficit,Manny Machado's solo shot tied the score, Wil Myers'solo blast put them ahead, Tatis' second homer padded the lead and Myers' second gave them even more insurance. Tatis and Myers became the second teammates in history to homer twice in the same postseason game. The others: a couple of guys named Babe Ruth and Lou Gehrig, in Game 3 of the 1932 World Series.

As easy as the Padres can make offense look, their pitching didn't exactly hold up its end of the bargain for the second consecutive game. After using seven relievers for 6 innings in Game 1, they needed eight relievers to cover the final seven innings Thursday. Oh, and they don't have an obvious starter for Game 3, either, leaving the win-or-go-home game to the team's bullpen -- and offense.

Though the Padres are fine relying on their bats, they'll face their toughest test yet: Cardinals ace Jack Flaherty, whose difficult-to-explain slotting in Game 3 turned out to be mighty fortuitous for St. Louis. Seeing how the Padres are swinging, and how quickly they can turn a crooked deficit into a victory, he'll need to be closer to the 2019 version of himself than what he has been in 2020. -- Jeff Passan

Game 2 hero: Ian Anderson sparkled in his postseason debut, striking out nine in six sharp innings while adding to the Reds' offensive woes with every K.

What it means: The Reds were the favorite "upset" pick of the first round due to the strength of their starting pitching, but now we know why Trevor Bauer and Luis Castillo went a combined 9-10 this year -- the Reds don't hit, and they especially don't hit away from cozy Great American Ballpark. Bauer and Castillo allowed just one run over their outings, but that's one more than the Reds scored in two games. (You would think getting shut out in consecutive postseason games is rare, but it happened to both the Rockies and Braves in the 2018 division series.) The Reds had just one extra-base hit in the two games.


Credit the Atlanta pitching, however. In Game 2, rookie Ian Anderson looked every bit as dominant as he did during his six regular-season starts, when he posted a 1.95 ERA and allowed just one home run in 32 innings. The right-hander threw 17 first-pitch strikes to the 22 batters he faced, but what was impressive is that he wasn't just pounding fastballs. Of those 22 first pitches, nine were four-seam fastballs, 12 were curveballs and one was a changeup. Anderson is just 22, but pitched with the command and poise of a seasoned veteran. We know the depth of the Braves' rotation is a problem and that will get tested in the next round, but Max Fried and Anderson look like a formidable one-two punch and they have a deep bullpen to chew up innings when the back of the rotation does start. -- David Schoenfield

Next up:The Braves will face either the Cubs or Marlins in the National League Division Series at Minute Maid Park in Houston, but must wait an extra day to find out after Thursday's Cubs-Marlins game was postponed due to weather.

The Reds head to the offseason with some major questions to answer about their lineup struggles.

Game 3 hero: The Athletics received contributions from most of their roster on Thursday, but it was Chad Pinder's two-out, two-run single in the bottom of the fifth that capped Oakland's comeback from an early 3-0 deficit. That put the A's ahead 6-4, and with the mighty Oakland bullpen wriggling out of one Chicago rally after another, Pinder's timely blow gave the relievers the kind of lead they've preserved all season.

What it means: Chicago's plan could have worked, and there might have not been a better option. Luck worked against the plan, to some extent. Still, while good results can follow from a bad design, a bad design is not something you strive for, especially in the postseason. The Chicago approach seemed to be to pull a pitcher as soon as he encountered trouble, beginning with replacing starter Dane Dunning in the first after he'd faced four batters. The problem is, that started a never-ending turnstile of pitching changes that pushed the outer bounds of Chicago's bullpen depth and set up a battle royale of relief pitching that in most cases is going to favor Oakland.

Still, it could have worked. Rookie phenom Garrett Crochet had to exit after replacing Dunning and striking out the only two batters he faced, going down with what was termed a forearm strain. After the game, White Sox manager Rick Renteria said the plan was try to get Crochet through at least two more innings. At the plate, Chicago's hitters got runners on against that mighty A's bullpen throughout, often setting the plate for the heart of the order. But the White Sox never got the big, late-inning hit that might have saved their season and made everyone forget the bullpen's struggles. The biggest disappointment was when MVP candidate Jose Abreu rolled into a double play with two on to end the eighth. That's a matchup you like, no matter who is on the mound. Still, if you're a Sox fan, you're going to fixate on the bullpen. Eight walks and six runs parsed out over a parade of largely faceless firemen -- too many faceless firemen.

But if you're an A's fan, you rejoice. It was a tight, tense game, the type of which a club has to survive over and over to play deep into October. It was the type of game the Athletics had not survived this century, over a span of a record nine consecutive losses in winner-take-all games. With a deep, versatile roster, one of the game's best bullpens and a lineup of boppers who can provide the big blow that decides so many tight playoff games, this ought to be the right kind of team for this kind of playoff setup. -- Bradford Doolittle

Next up: Oakland will begin a best-of-five division series against the Houston Astros on Monday at Dodger Stadium in Los Angeles.

Meanwhile, the young White Sox head home with some questions to answer after losing the first winner-take-all matchup in franchise history.

Game 3 hero:Clayton Kershawtook the first step toward exorcising his (and the Dodgers') postseason demons with eight dominant innings, giving up only three hits while recording 13 strikeouts. The 13 K's all came on breaking pitches, the most by any pitcher (regular season or playoffs) since 2016, and the most in the playoffs in at least 20 years. He also joined Cliff Lee as the only left-handers with 13 strikeouts and no runs allowed in a playoff game.

What it means:There was a lot of talk throughout the summer about how Kershaw had tapped back into the stuff that made him one of the premier pitchers in the game as recently as three years ago, and the fact that it showed up in the postseason speaks volumes about why the Dodgers feel so good about their chances in this wacky tournament.

Kershaw might have been facing a weak Brewers lineup -- weakened further by the loss of Ryan Braun -- but his stuff was elite and his execution was precise. His slider had depth, his curveball had bite, his fastball had life and his best stuff seemingly showed up late. Kershaw retired 10 in a row toward the late stages of Game 2, then issued a one-out walk in the eighth, picked Luis Urias off first base and struck out David Freitas to complete what might have been the best postseason start of his career.

With Walker Buehler nursing a blister and the other three starters all relatively inexperienced, this is the Kershaw the Dodgers need to finally win it all. -- Alden Gonzalez

Next up: The Dodgers face the winner of Friday's Padres-Cardinals Game 3 in the National League Division Series at Globe Life Field in Arlington, Texas, beginning Tuesday.

Meanwhile, the Brewers face the offseason with some questions to answer. 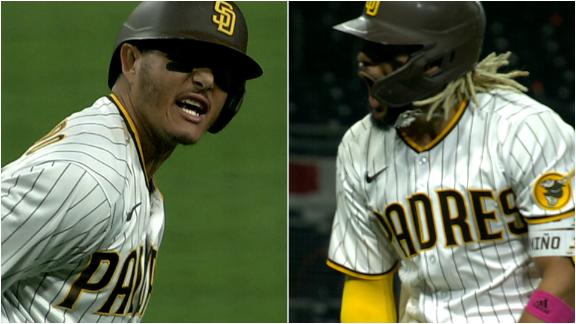 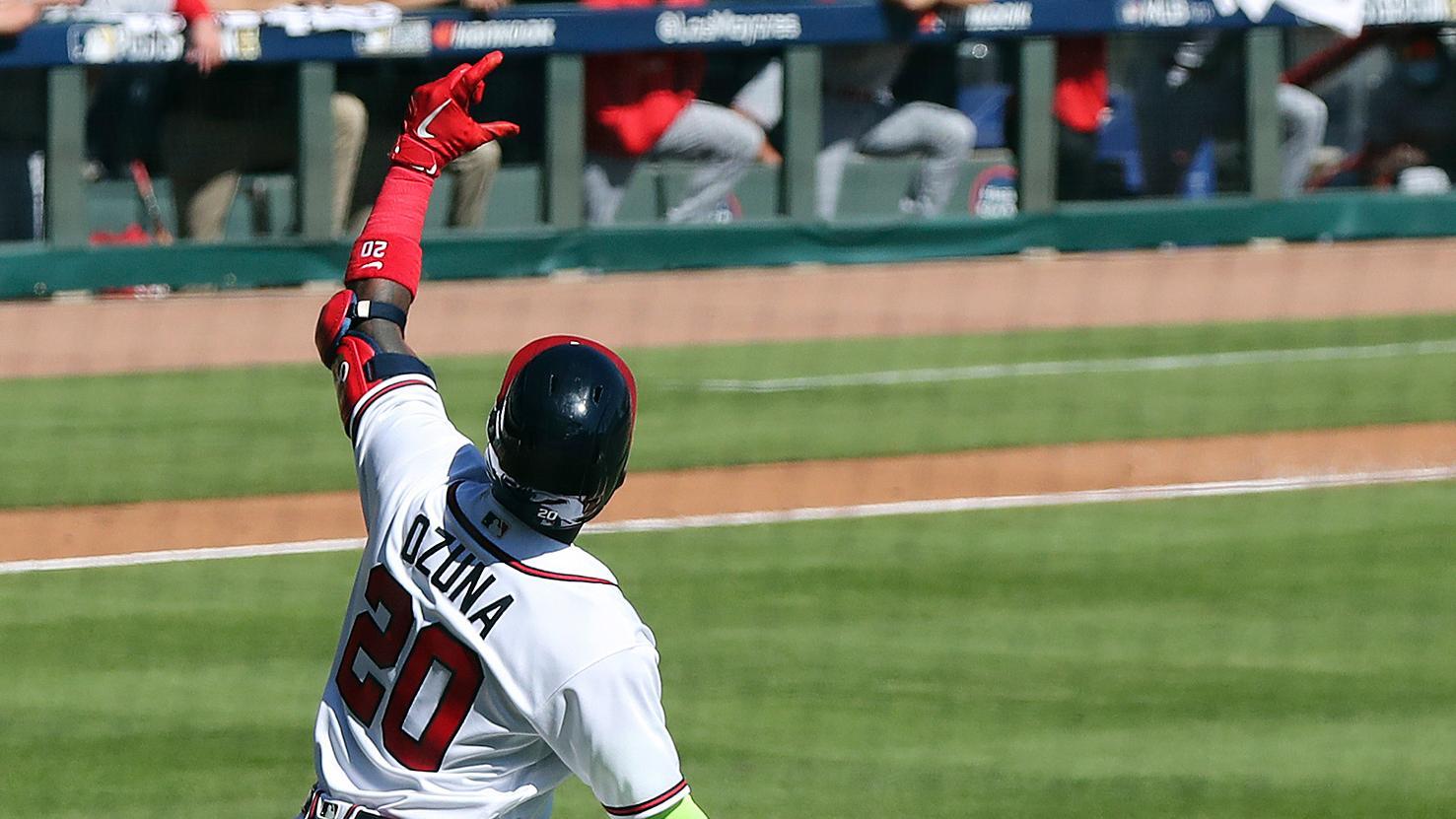 Ozuna celebrates two-run HR with imaginary selfie
Marcell Ozuna tacks on two insurance runs for the Braves heading into the ninth inning with a homer off Raisel Iglesias. 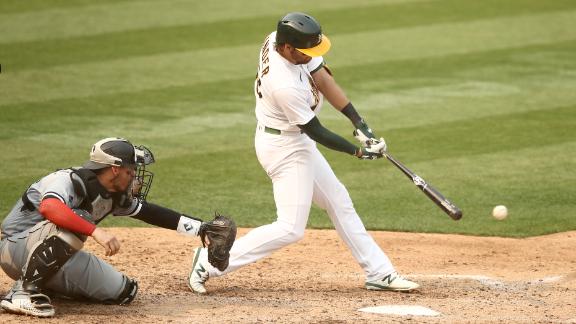 Pinder's single gives A's the lead
Chad Pinder drives in two as he slaps a single to center field to plate Sean Murphy and Marcus Semien to give the A's a 6-4 lead over the White Sox. 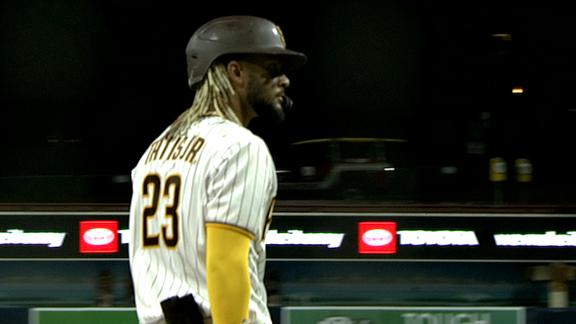 Tatis flips bat and struts after hitting second HR
Fernando Tatis Jr. flips his bat and struts down the first-base line after going the other way for his second home run of the day. 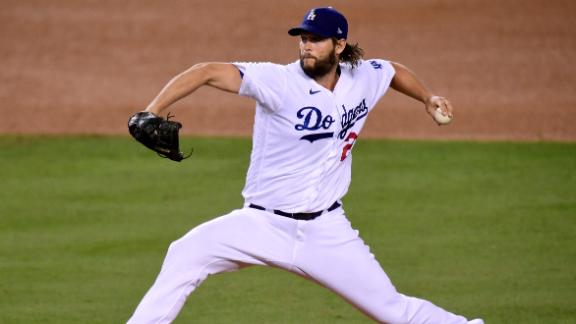