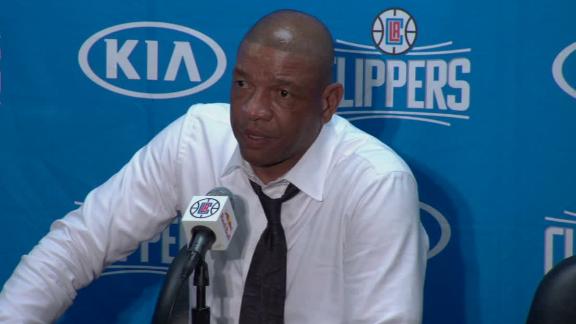 Oklahoma City Thunder assistant coach Monty Williams delivered an emotional speech Thursday at the funeral service for his wife, Ingrid Williams, who died Feb. 10 after being involved in a car accident the night before.

Williams gave his eulogy with a contingent of NBA coaches and players in attendance to support him. Among those at the funeral were coach Doc Rivers, Chris Paul and Austin Rivers of the Los Angeles Clippers; coach Gregg Popovich, Tim Duncan and David West of the San Antonio Spurs; coach Alvin Gentry, Anthony Davis, Ryan Anderson and Eric Gordon of the New Orleans Pelicans; and the entire Thunder organization.

"I'm thankful for all the people who showed up today," Williams said. "It's a pretty tough time, not just for me but for all of you as well. I'm mindful of that.

"This is hard for my family, but this will work out. And my wife would punch me if I were to sit up here and whine about what is going on. That doesn't take away the pain, but it will work out because God causes all things to work out. You just can't quit; you can't give in."

Ingrid Williams, 44, died from injuries she suffered in an accident in Oklahoma City after her car was struck head-on by an SUV that crossed the center line after losing control. The other driver, Susannah Donaldson, also died.

Members of the Clippers and Spurs spent the early portion of Thursday at the funeral but made it back in time for tipoff of the teams' matchup at Staples Center.

The Spurs coach declined to comment on the funeral.

"I'd rather not go there," Popovich said. "Game time, let's go. This isn't TMZ or the crazy channel, just basketball."

Duncan is a former teammate of Williams, who played for Popovich in San Antonio and served a stint as a coaching intern when the team won the NBA title during the 2004-05 season. Borrego worked on Williams' staff as an assistant in New Orleans, where West also played for the coach.

"If you know Monty, you're a better person for knowing him," West said after the Spurs' loss. "It's a really tough situation for his family. He's a courageous man. I envy his strength and his courage. That was probably one of the most powerful moments of my life, sitting there listening to him have the strength to stand in front of his children and ask everybody to pray for the other lady that lost her life. It showed strength and courage I've never experienced in my life. So our hearts are with him."

Clippers assistant coach Mike Woodson handled the pregame news conference in Doc Rivers' place as the Los Angeles contingent made it back to Staples Center in time for tipoff.

"I told him he ain't always got to be the strong one," Paul said of Williams. "He's all about family, strong in his faith. You could see from the outpouring how strong he is and how much he's loved. We all could learn something from him."

Said Austin Rivers, who played for Williams in New Orleans: "It was tough to see something like that happen to such a good guy. Ingrid is one of the sweetest people I ever met."

"He probably was one of the strongest guys in there," Austin Rivers said. "I just told him we all love him."

LeBron Jamesshowed his support for Williams on Thursday night after the Cleveland Cavaliers' win over theChicago Bulls.

The Thunder said an estimated 900 people attended what was called a Celebration of Life for Ingrid Williams at Crossings Community Church in Oklahoma City.

The couple has five children: Lael, Faith, Janna, Elijah and Micah. Williams and his wife met while both attended Notre Dame, where she competed in track and field. They were married for 20 years and co-wrote a book, "Look Again 52," as a guide to explore the Bible throughout a year.

Among the others with NBA ties to attend the ceremony were Kiki VanDeWeghe, Jerry Colangelo and Tom Thibodeau. 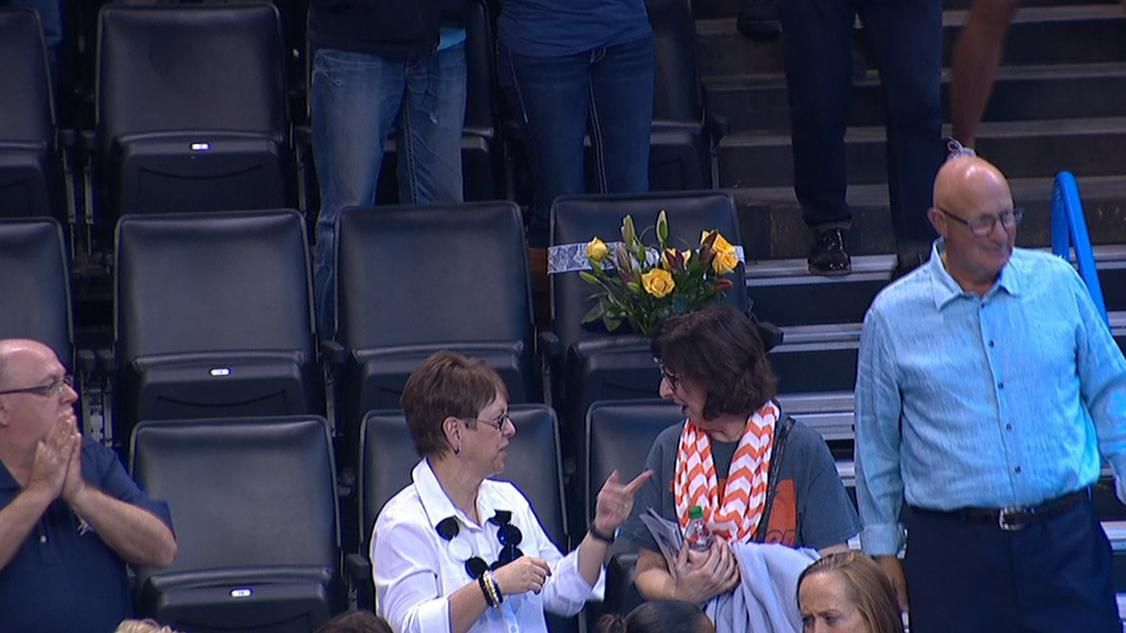 Thunder fans remember Ingrid Williams
Fans at Chesapeake Energy Arena wear 'W7' buttons, for Monty Williams' family of seven who lost their wife and mother Ingrid last Wednesday in a car accident. Her seat at the arena is filled with a bouquet of flowers in her remembrance.