Nationals to start Stephen Strasburg in Game 2 vs. Dodgers 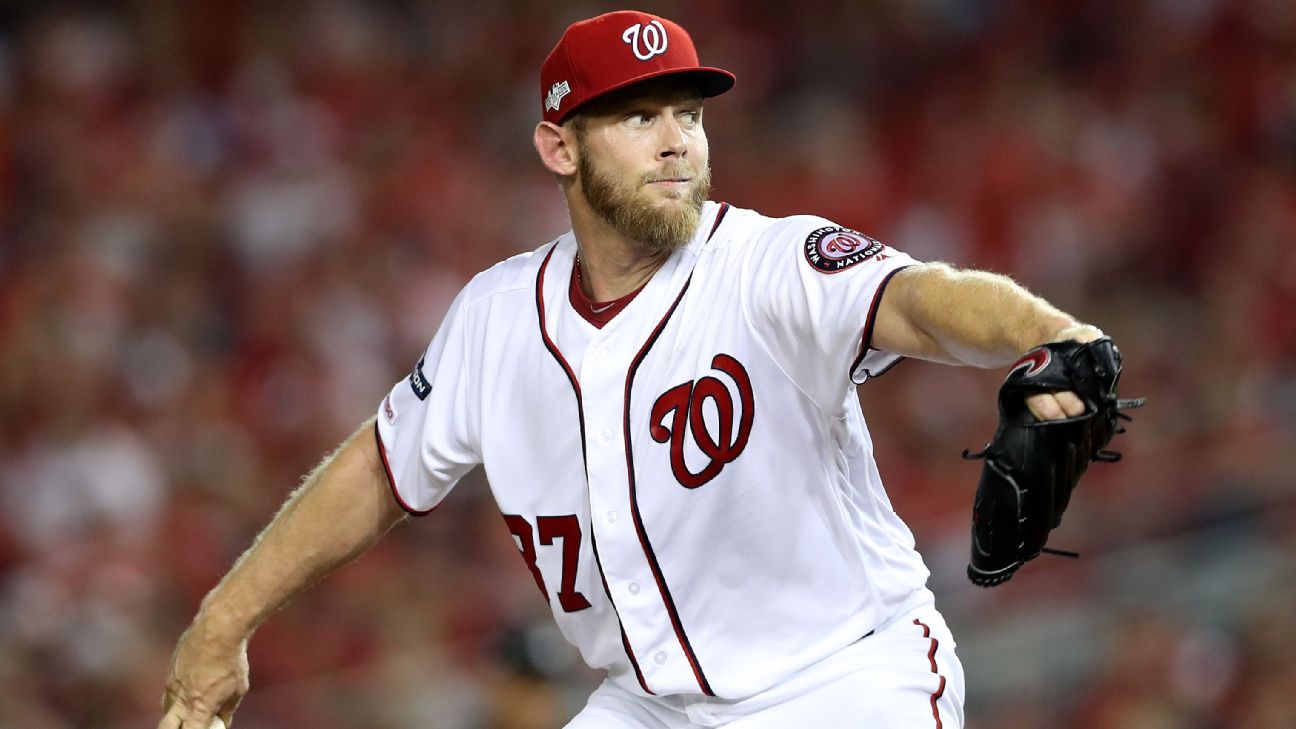 Manager Davey Martinez made the announcement before the start of Game 1 against the Los Angeles Dodgers on Thursday.

"He said he felt great, and he wanted to pitch," Martinez said of Strasburg, who worked three scoreless innings in relief of Max Scherzerand earned the win in Tuesday's wild-card game. "For me, it's like he threw a side [session] of 34 pitches with intensity. That's the way I looked at it the other day."

Patrick Corbintook the mound for the Nats in the series opener and went six innings, allowing two runs (one earned), three hits and five walks and striking out nine. Washington lost 6-0.

Strasburg admitted that his wild-card outing -- which was his first relief appearance since he was a college freshman in 2007 -- wasn't the same as a typical bullpen session between starts.

"It is something I haven't done in a really long time, and it is what it is," said the 31-year-old right-hander. "So just try to focus on what you can control and just disregard everything you can't. That's kind of the nature of the business. Sometimes you're going to have to deal with some things that you wouldn't expect, and bottom line is you still have to go out there and compete. It was definitely the most adrenaline I've ever had for a bullpen."

On Wednesday, after an off-day and a good night's sleep, Strasburg sought out his manager and told him that he was good to go for Game 2.

"He came in, without hesitation, he says, 'I want the ball. I'm ready to pitch. I feel great,'" Martinez said.

Strasburg, who's in the third year of a seven-year, $175 million contract, has been a workhorse for the Nationals this season. In 33 regular-season starts, he went 18-6 with a 3.32 ERA and led the NL with 209 innings pitched. It has been arguably the best season of his injury-riddled tenure in Washington.

A former top overall pick in 2009, Strasburg has dealt with injuries throughout his career. Toward the end of his rookie year in 2010, he underwent Tommy John surgery and missed most of the 2011 season. In 2012, when the Nationals made the playoffs for the first time since moving to Washington, the team shut down its prized pitcher in September, hoping to protect his valuable right arm. After starting Game 3 of the 2014 division series, Strasburg missed the 2016 playoffs due to a flexor mass strain. In the 2017 NLDS, he made two starts against the Cubs and didn't allow an earned run. Including his relief outing on Tuesday, Strasburg now has a 0.41 career ERA in the postseason.

By starting Game 2 on Friday, Strasburg then would be available to return to the mound on normal rest for a potential Game 5 next Wednesday. Martinez said that the schedule played a key role in his decision.

"I like the way that sets up, yeah. It had a lot to do with it," he said. "The biggest thing was I wanted him to come to me and I wanted him to own it. I wasn't going to pressure him into doing anything because he's done a lot for us already."

The Nationalswould be able to use Scherzer on regular rest for Game 3 in D.C. on Sunday.

"He's going to go through his daily routine," said Martinez of Scherzer, "and we'll make that announcement here in the next day or so."