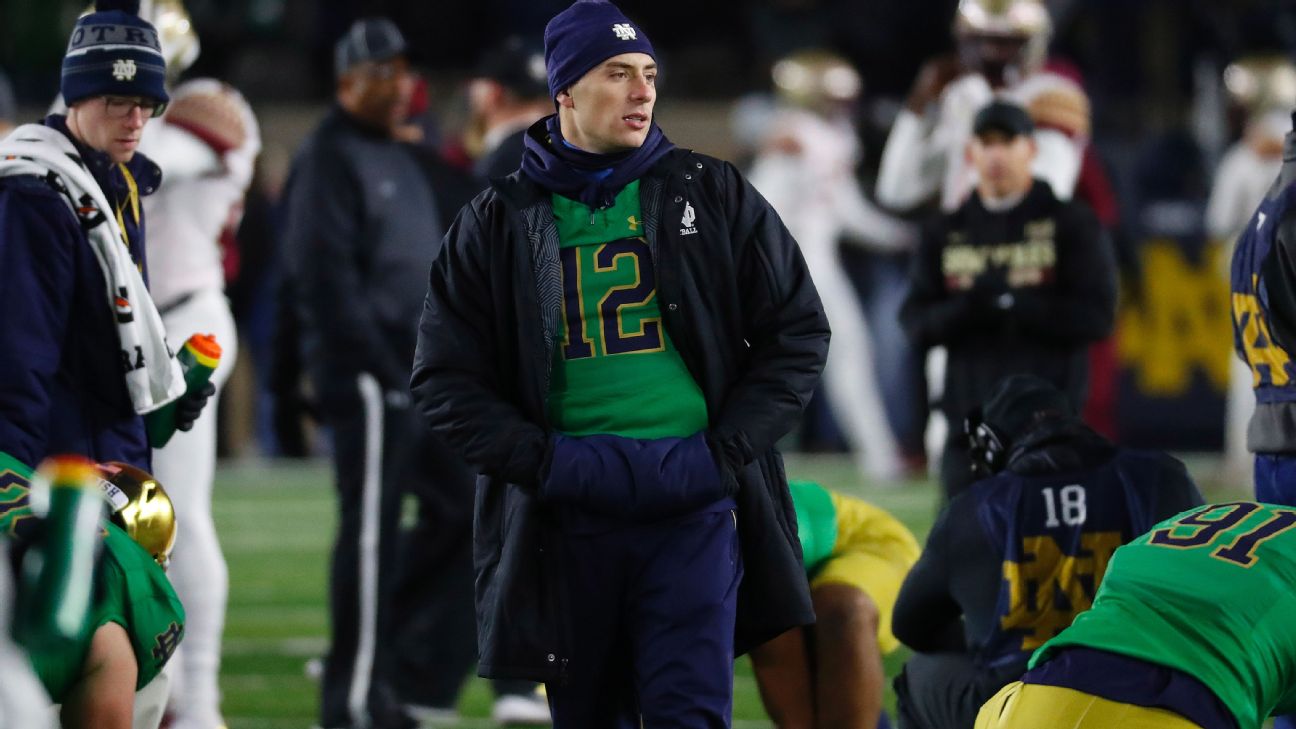 SOUTH BEND, Ind. -- Ian Book should be back as the No. 1 quarterback for No. 3 Notre Dame this week.

Coach Brian Kelly said Sunday that Book, who missed Notre Dame's victory against Florida State on Saturday night with an upper-body injury, is expected to practice Tuesday. If there are no setbacks, Book will reclaim his starting spot over Brandon Wimbush, Kelly said.

Book led the Fighting Irish (10-0) to six consecutive victories before the injury suffered in Notre Dame's 31-21 victory at Northwestern on Nov. 3 kept him out against the Seminoles.

Book was not in uniform Saturday night, but watched Wimbush, the quarterback he replaced four games into the season, throw three first-half touchdown passes in a 42-13 victory.

Notre Dame plays No. 13 Syracuse at Yankee Stadium in New York on Saturday.

"Ian would be our starting quarterback,'' Kelly said Sunday. Kelly had joked after Saturday's victory about creating a quarterback controversy for the media.

Book led the nation in completion percentage (74.5) and was sixth in passing efficiency (169.96) prior to Saturday's game. For the season, he has thrown for 1,824 yards and 15 touchdowns with four interceptions, and run for 218 yards and four scores.

Wimbush ran for 68 yards on 12 carries and was not sacked as the offensive line -- center Sam Mustipher, guards Aaron Banks and Tommy Kraemer and tackles Liam Eichenberg and Robert Hainsey -- had its way with a Florida State defense that entered the game allowing just 2.84 yards per rush but gave up 365 yards Saturday at 7.3 per carry.

"We've been waiting for that kind of consistency as a group, and that includes the tight ends [Alize Mack, Cole Kmet and Nic Weishar],'' Kelly said. "They were much more effective and efficient.''

Notre Dame did not lose a yard on any of its 50 rushes. Dexter Williams ran for a career-high 202 yards on 20 carries, including TD runs of 58 and 32 yards, and his backups Jafar Armstrong and Tony Jones Jr. combined for 83 yards on 13 runs.

Notre Dame entered Saturday's game against the Seminoles rushing for 181 yards per game (53rd nationally) and was coming off a roller-coaster three games in victories over Pittsburgh (80 rushing yards), Navy (254) and Northwestern (121). Notre Dame's season-high rushing effort was 272 yards against Stanford.

Senior Trevor Ruhland, who has started games at both guard positions and is Mustipher's backup, did not play Saturday because of elbow strain, allowing the 6-foot-6, 316-pound Kraemer to get all the snaps at right guard.