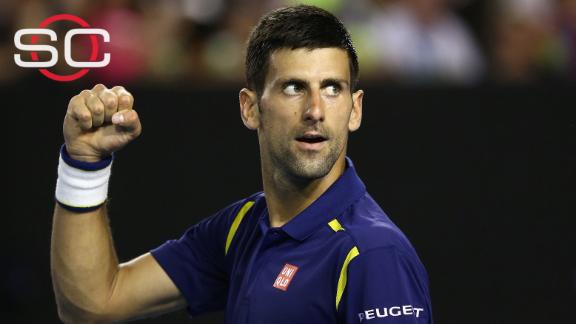 MELBOURNE, Australia -- A round after Novak Djokovic sprayed 100 unforced errors, it was Kei Nishikori's turn to litter the court with mistakes.

The seventh-seeded Japanese player missed shot after shot -- 54 in total -- in a 6-3, 6-2, 6-4 loss against the world No. 1 in the Australian Open quarterfinals Tuesday.

From the start, this encounter was about which player would play less sloppily. And while Djokovic's unforced error total was only 27 this time around, he never found a good rhythm. For perspective, the five-time Aussie Open champ batted only 22 winners in the 2-hour, 7-minute affair.

"Yes, that was the goal, to decrease the unforced errors ratio," Djokovic said. "I've done that. I knew that I'm going to play against an opponent that plays very fast, faster than [Gilles] Simon.

"I tried to weather the storm, hang in there. He came up and played first couple games very fast, very quick. Took the ball early, being very aggressive from both corners. I expected that."

Another positive for Djokovic? He did not attempt a single backhand drop shot, a tactic he promised to avoid under all circumstances after his error-strewn match against Simonon Sunday.

Afterward, Djokovic said he took the day off from practice to regroup, both mentally and physically.

"Yeah, I've had previously these situations before," Djokovic said. "As I said on the court, less is more sometimes. You need to recognize the moment. I've played a lot of tennis -- maybe even too much. There was no concern for me that I would not feel the ball today. It was about getting recovery. I think it was the right decision."

With that, Djokovic, who was noticeably agitated at times, especially in the early stages, advanced to his sixth semifinal Down Under. He also collected his 55th match win in Australia, one shy of Stefan Edberg for second all time.

So for the third consecutive major, Djokovic and Roger Federer will square off, albeit a round earlier than their Wimbledon and US Open final clashes a season ago. Djokovic won both those encounters, but did fall to the Swiss three times in 2015 -- half his season total

By contrast, Federer played a squeaky-clean match in a straight-sets drubbing of Tomas Berdych earlier in the day. Through five matches, Federer has dropped only a single set.

With 22 wins each in their long head-to-head history, this one appears too close to call.

"It's obvious that he's a very complete player," Djokovic said. "He's trying lately to come to the net more, kind of shorten up the rallies. I mean, he definitely has the game for that. He's got a great variation from the backhand side with the slice, short slice. He's got great defense, amazing offense. He's very complete. He puts constant pressure on the opponent. You have to be aware at all times. You got to be tough. You got to be concentrated.

"I think his backhand is better than it was maybe five, six years ago. So, you know, he's playing some terrific tennis, as I said, on the hard court. This is going to be a big challenge for both of us."

While Nishikori's game was in tatters -- a surprise considering he had dropped only one set entering the semis -- he also looked physically spent.

So frustrated was Nishikori with his performance, that at one point in the second set, he whacked a ball into the upper deck of Rod Laver Arena.

But in the third, Nishikori, who still has yet to advance past the final eight in Australia, began to show some spirit.

Up 1-0, he broke Djokovic for the first time in the match. But what ensued more or less encapsulated the day -- three more consecutive breaks of serve, largely a result of misfires and miscues.

Somewhat ironically, the match finally ended when Djokovic clocked a beautifully struck backhand winner just out of the reach of Nishikori's racket.

"I was solid," Djokovic said. "I was determined, focused. In important points and moments I managed to stay composed and make him play an extra shot. Overall, it was a very solid performance."