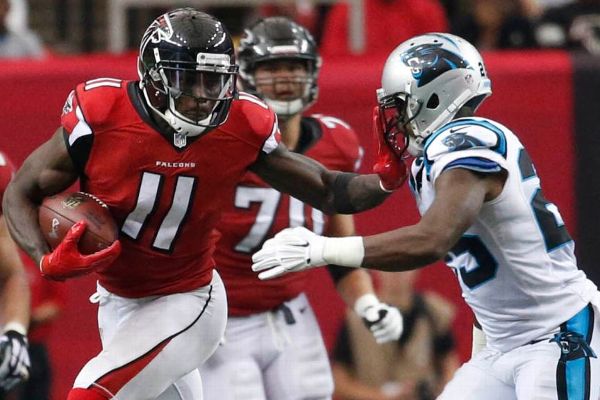 Benwikere's roster spot was filled by cornerback Zack Sanchez, who was signed from the practice squad. The Panthers host the Tampa Bay Buccaneers on Monday night.

Benwikere was credited by Pro Football Focus with giving up 220 of Jones' 300 yards.

Panthers coach Ron Rivera said the staff discussed where it was with the secondary over the past couple of days and "decided to move on."

"We've got a group of young guys that we're looking to play and get them out on the football field,'' Rivera said. "It's something we feel we needed to do as we go forward.

A fifth-round pick in 2014, Benwikere started 14 games for Carolina over the past three seasons. His 2015 season ended after he suffered a fractured leg during a December game against Atlanta.

Benwikere began training camp on the physically unable to perform list, but he returned to earn a starting job. He started all four games at outside corner, but admitted after Sunday's 48-33 loss to Atlanta that his conditioning wasn't the best.

"I started out doing well, but it's kind of like after that I started to get tired and get out of breath,'' Benwikere said.

Rivera would not address whether Benwikere's conditioning was a factor.

Sanchez was one of three cornerbacks drafted by Carolina this past season in an attempt to replace 2015 Pro Bowl selection Josh Norman, now with Washington. The fifth-round pick out of Oklahoma was among the final roster cuts after training camp, then re-signed to the practice squad.

The roster moves, along with a toe injury that will keep rookie corner James Bradberry sidelined against Tampa Bay, means the Panthers will go with three new starters in the secondary against the Buccaneers.

Veteran Michael Griffin is expected to replace Tre Boston as the free safety. Robert McClain and rookie Daryl Worley are expected to start at outside corner.

"We're trying to put it together so we can move forward,'' Rivera said. "It's a big part of retooling this football team. It's tough. It's one of those things. Until we get it right in terms of players on the field and things we can call, put them in position to have success, we've just got to keep working through it.