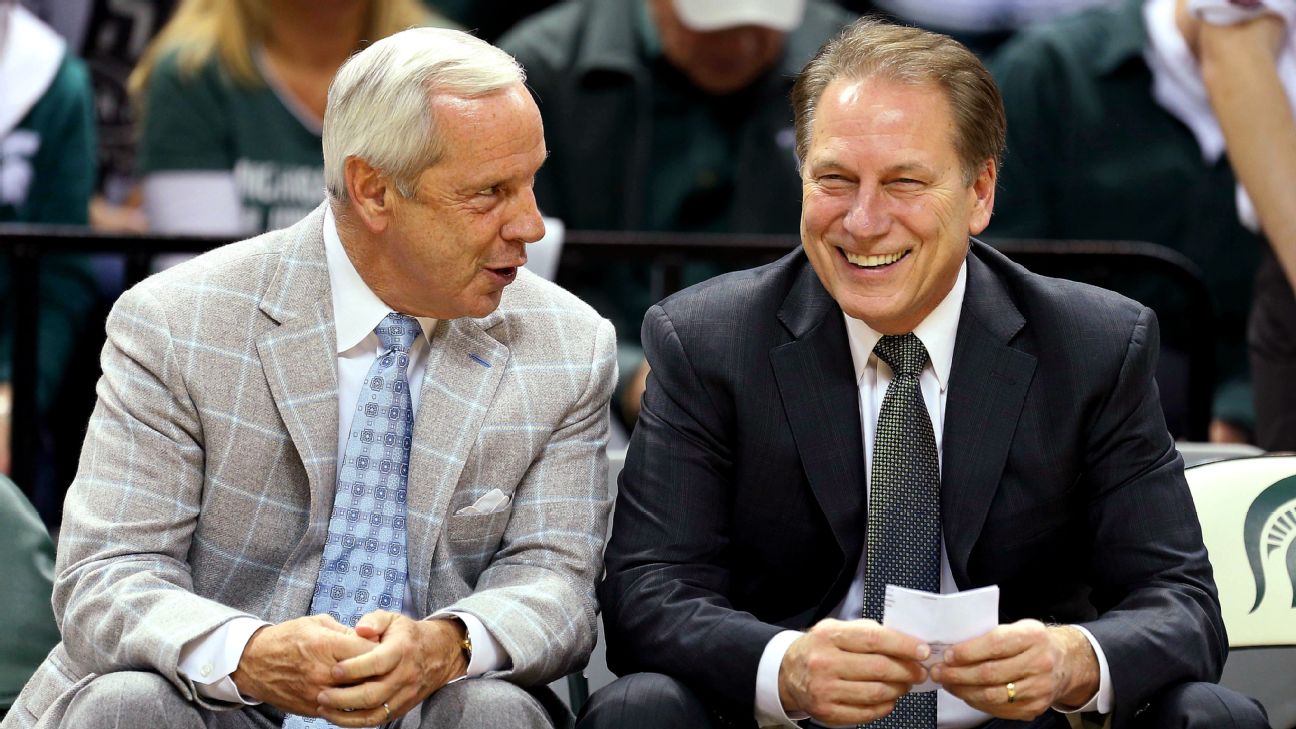 First things first: Mike Krzyzewski and Jim Boeheim aren't here. They were hired 40 and 44 years ago, respectively, placing them well outside our "past 25 years" scan. Nevertheless, those were great hires.

While we're handing out awards to the prehistoric past, let it be known that when Davidson hired Bob McKillop in 1989, he was the head coach at Long Island Lutheran High School. So, yeah, that would definitely make this list if it were eligible.

Last warning label. This list covers active college coaches only. It need hardly be added there have been truly amazing hires in the past quarter-century with respect to now-retired members of the profession (we see you, Bo Ryan), as well as those currently at the next level or perhaps in transit in between levels (hello, Billy Donovan, Brad Stevens and John Beilein).

North Carolina swung and missed on Williams in 2000, then came back around three years later and got its man. The sum total of what we've seen over the past 17 years (yes, even including last season) says the Tar Heels were right to try the first time and then to keep on trying. Since the day Williams was hired in Chapel Hill, no Division I men's basketball coach has won more national titles. Williams has put three trophies on the shelf, making this the No. 1 hire over the last 25 years.

From November 2013 to April 2018, Wright posted a 165-21 record (77-13 in Big East play) to go along with three No. 1 seeds and two national titles. No coach on this list has had a better five-season run in the last quarter-century. Few, if any, coaches on or off this list have been more influential in recent years in terms of how the game is played.

Look who snuck in under the 25-year cutoff. Sorry, Coach, you won't be here if we do this again in 2021. Let's see, 628 wins in 25 seasons, eight Final Fours and the Big Ten's most recent national title. That will definitely earn you a spot here.

Prior to Kentucky in 2015, the last undefeated team to make It to the Final Four was UNLV in 1991. The Wildcats didn't win the title that year, of course, but they did in 2012. They've reached three Final Fours under Calipari (and, perhaps even more incredibly, six Elite Eights), and UK's recruiting classes ranked either No. 1 or 2 at ESPN.com every year from 2009 to 2018.

In the decade before Bennett's hiring, Virginia won 55% of its games and recorded one win in the NCAA tournament. Conversely, since Bennett arrived in Charlottesville, the Cavaliers have won 74% of the time and collected 13 tournament victories. There's also that 2019 national title to factor into the record. Bennett has been a miracle worker.

Few has never missed the NCAA tournament, posting a perfect 20-for-20 attendance record. Just three coaches have longer active streaks, and, not coincidentally, we've mentioned all of them already: Mike Krzyzewski (24), Tom Izzo (22) and Bill Self (21, with three different teams). The fact that Few's doing this at a small Jesuit school in the West Coast Conference makes it even more remarkable.

With Duke and North Carolina both sustaining their excellence more or less annually, the ACC has tended to be a graveyard for the league's other new hires. Tony Bennett achieved escape velocity from that trap, however, and so too has Hamilton. FSU is 29-9 in ACC play over the past two seasons and has also appeared in the last two Sweet 16s.

Before hiring Beard, Texas Tech had never appeared in an Elite Eight. With Beard, the Red Raiders played in regional finals in both 2018 and 2019, famously coming within mere seconds of a national title in the latter year. Few if any coaches have done more with less in a shorter period of time.

Not only did Huggins upset top seed Kentucky on his way to the 2010 Final Four, he changed his style of play five years after that and gave West Virginia a fresh lease on success under the banner of "Press Virginia." They must know something in Morgantown, because the Mountaineers' past two hires have been Huggins and John Beilein. Not bad at all.

The Shockers earned a No. 1 seed and entered the 2014 NCAA tournament undefeated, and all they got for their troubles was a pairing in the round of 32 with statistically the greatest recruiting class of the one-and-done era (i.e., Kentucky). Note additionally Marshall's run of seven straight tournament appearances -- a record both at Wichita State and in the Missouri Valley.

We won't rehash the state of the Baylor basketball program in 2003 or how it got there. (Google away.) Let's just say Drew has made delicious hoops lemonade out of what was once programmatic toxic waste. Under Drew, the Bears have been to four Sweet 16s, two Elite Eights and, who knows, 2020 could have been the best year yet.

Arizona has reached three Elite Eights under Miller, but timing has not necessarily been his friend. His best team was arguably his 2015 group, which entered the NCAA tournament 31-3. But other teams that same season included Kentucky (34-0 on Selection Sunday), Villanova (32-2), Wisconsin (31-3) and eventual champion Duke (29-4). Even a team as mighty as UA drew one of those four in the Elite Eight, and the Wildcats lost to the Badgers.

Brey chose his mentors well. When you've been an assistant to both Morgan Wootten (DeMatha High School, 1982-87) and Mike Krzyzewski (Duke, 1987-95), you're tough to beat in that category. The Fighting Irish have been to 12 of the 19 NCAA tournaments that have been played since his hiring, and ND nearly beat team of the decade Kentucky in the 2015 Elite Eight.

The head-coaching job with the Rams has definitely been a launching pad over the past 20 years. From Jeff Capel and Anthony Grant to Smart and Will Wade (and, who knows, Mike Rhoades), VCU coaches have a tendency to go on to bigger programs. Still, no coach in Richmond has done anything bigger or better than what Smart did in 2011 when the Rams won five games and made the trip from the First Four to the Final Four as a No. 11 seed.

Who says there are no second acts in American (coaching) lives? Sampson was fired at Indiana in 2008, hit with a show-cause order by the NCAA and exiled to the Siberia of being an NBA assistant coach. (Which, truth be known, isn't all that punitive.) Now he has won at least a share of the AAC title two years running at a program that previously had not captured a regular-season championship since 1992.

Few takes are colder than the ones offered by we media types in April 2010 when Iowa State hired a coach with zero coaching experience. The Cyclones' decision was greeted with some skepticism. Yet Hoiberg proved to be a master of the transfer market, importing talent and parlaying his success in Ames into a shot at an NBA coaching gig. Which didn't go so well, so now he's back in the college game. Still, that was a good hire by ISU.

Let's not overthink this. Since 1970, with coaches not named Dana Altman, the Ducks have won 52% of their games. With Altman, on the other hand, they've won 66% of the time. Oregon earned its only No. 1 seed in program history in 2016 and the following season reached the Final Four for the first time since the Ducks won the national championship in 1939.

After Auburn reached the 2003 Sweet 16 as a No. 10 seed, the Tigers finished under .500 in SEC play in 13 of the next 14 seasons. Which is another way of saying that taking eventual national champion Virginia to the game's final second in the 2019 Final Four would be a huge deal for any program and was an especially huge deal for this program.

In what is fast becoming a recurring theme on this list, Painter really, truly did have eventual national champion Virginia dead to rights in the 2019 NCAA tournament. Purdue was making its fifth straight NCAA tournament appearance that year, a feat the Boilermakers had not accomplished since ... Painter took them there six straight times from 2007 to 2012.

Not only did Dayton have a Naismith and Wooden award winner in Obi Toppinthis season, but the Flyers were capitalizing on his presence in very interesting ways and getting excellent shots for all their players all season long. UD was on its way to a No. 2 or possibly even No. 1 seed, either of which would have been the best showing by an Atlantic 10 team since Saint Joseph's in 2004. Grant had one of the best seasons of any coach in recent memory.

Young readers are going to doubt this, but there was a time when a Pitt basketball coach took his team to eight straight NCAA tournaments and earned two No. 1 seeds in three years. No, really, it's true. Dixon made it happen between 2004 and 2011. Not a bad hire.

Even if he hadn't defeated Duke in the 2017 round of 32 and taken his team to the Final Four as a No. 7 seed, Martin would be a strong candidate to make this list. He has elevated the South Carolina program just as he elevated the Kansas State program before arriving in Columbia.

Hardaway is the first individual not named either Mike Krzyzewski or John Calipari to sign ESPN.com's No. 1-ranked recruiting class since Ben Howland did so for UCLA in 2008. The freshman class that included James Wiseman, Precious Achiuwa, Boogie Ellis, D.J. Jeffries and Lester Quinones was a seismic recruiting coup.

On the one hand, he did win the 2013 national title. On the other hand, the championship was vacated, and he was fired. What do you do with a sequence like that? Rank it No. 25, and wish Coach Pitino luck at Iona. Go to it, sir. 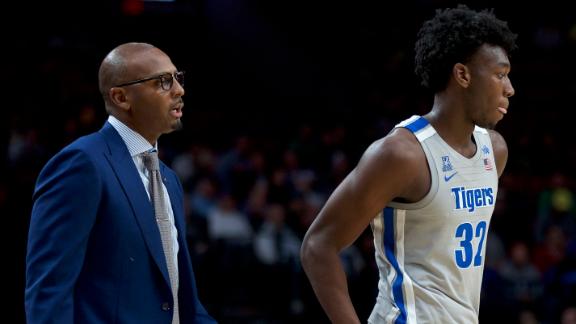