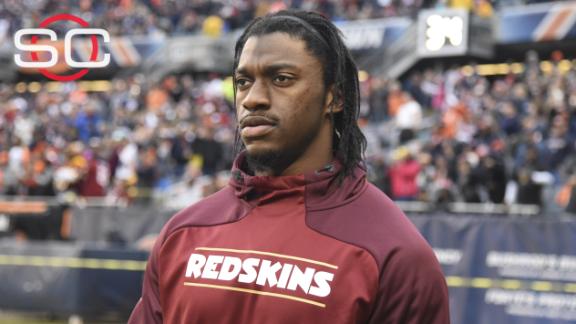 The Cleveland Browns appear to have found one piece to their quarterback puzzle, announcing they have signedRobert Griffin III on Thursday.

Griffin, who made the decision after meeting with Browns coach Hue Jackson and associate head coach Pep Hamilton, is guaranteed $6.75 million and can make up to $11 million with incentives in 2016 as part of the two-year, $15 million deal.

Griffin received a $3.5 signing bonus and a fully guaranteed base salary of $3.25 million this season. He can make another $750,000 in per-game roster bonuses and $3.5 million in individual performance incentives for playtime, passing yards and passer rating.

"This isn't about me, to be honest with you. I just want to go out and help this team win football games," Griffin said when asked during a conference call how important it was for him to get his career back on track. "I believe in what Coach Hue is preaching. I believe in Pep Hamilton and what they plan to do.

The 26-year-old Griffin was released by the Washington Redskins on March 7, two days before his 2016 option, worth $16,155,000, would have become guaranteed.

He heads to Cleveland with a chance to revive his career for a coach who thinks highly of him.

Griffin visited Cleveland on March 18 and 19, and Jackson raved about what he heard. That was enough for the Browns to be willing to take a chance on a guy who did not play a down in 2015.

During the visit, Griffin also learned what he wanted to know about Jackson, and the Browns.

"Just his excitement for the game, the passion he has, and the dedication," Griffin said when asked what he likes about Jackson. "When you have those things, then things will eventually turn in your favor.

"He has a proven track record of working with quarterbacks, working with teams and molding an offense to what a team has. I look forward to that and just growing with him. It's really exciting for me."

Griffin and the Browns are scheduled to play the Redskins in Washington next season. Meanwhile, they're churning out tees and putting a nifty spin on Griffin's RG III moniker.

Griffin was the second overall pick in the 2012 draft; the Redskins traded two first-round picks and a second-rounder and swapped first-rounders with the Ramsto draft Griffin. The Heisman Trophy winner hasn't lived up to the success he enjoyed as a rookie, when he guided the Redskins to an NFC East title and was named the offensive rookie of the year after setting an NFL record for rookies with a 102.4 passer rating.

Griffin partially tore the posterior cruciate ligament in his right knee in December of that season and then tore the ACL in the same knee in a playoff loss to the Seattle Seahawks. Friction with the coaching staff came to light that offseason, and 2013 was the last season he was a full-time starter before he was shut down with three games to go by then-coach Mike Shanahan.

Jay Gruden took over as coach in 2014, ostensibly to help fix Griffin, but it didn't help. Griffin's struggles started in training camp and continued into the season. He missed six games because of a dislocated ankle suffered in Week 2 and was later benched for three games, only to return after his replacement, Colt McCoy, injured his neck.

Griffin lost the Redskins' starting quarterback job in August 2015 and served as Washington's No. 3 quarterback last season. He was active for one game.

He says he used those years as an opportunity to learn, even if it wasn't while on the field.

"What I learned most was just the love that's inside of me for this game of football. What happened down there would break a lot of people," Griffin said. "I thank God for the people he surrounded me with to help me get through that time and to show me that this is what I'm supposed to do.

"This is my calling. I'm excited about that. ... When it comes to what I need to work on, I'm excited to have the opportunity to grow with a coach that believes in me. That's big. I just have to go out and prove it."

Jackson said Griffin took responsibility for his failures in Washington and was honest about his mistakes. The coach also said Griffin's success in 2012 shouldn't be simply ignored.

"He's played," Jackson said, "and he's played at a high level. You're talking about a guy who knows what it's like to be a quarterback in the National Football League. He understands the pressure, the stress. He understands what it takes to get ready during the week playing a game, as opposed to the other guys who are coming out. They've never been through it."

One player Griffin could be reunited with on the Browns is wide receiver Josh Gordon, who is currently suspended by the NFL. The two were teammates at Baylor and remain friends.

"Josh is family. We went to Baylor together. I love the guy," Griffin said. "I don't know what's going to happen with him and the league, or with the team. But he always knows he has a brother in me.

"If the opportunity comes where he can get reinstated and play for the Browns, I won't be upset with that, let's put it that way. But he is family, and at Baylor we believe in that no matter what happens, we've always got your back."

Gordon made it clear on Twitter that he'd welcome the opportunity to work with Griffin.

The Browns own the second pick in the 2016 draft, and Jackson and director of football operations Sashi Brown both said having Griffin would not stop them from taking a quarterback if they felt he was the best player.

"We were able to see and feel his passion and commitment to re-establishing himself as a starting quarterback in this league and his embrace of the hard work that will be is essential to his development," Brown said of Griffin in a release. "We've been clear on the importance of improving and stabilizing the quarterback position for our franchise. We have said that the draft is and will be our primary focus, but we will always look to complement the draft through free agency, and this is one of those examples."

Jackson said he liked what he saw of Jared Goff at the quarterback's pro day workout at Cal, and he was slated to seeCarson Wentz at North Dakota State on Thursday.

The Browns have Josh McCown, 36, on the roster, as well as Austin Davis, 26, and Connor Shaw, 24. It's not yet known whether Griffin's signing will affect McCown's status.

Griffin said he won't be fazed if the Browns draft a quarterback.

"If they draft a quarterback, [I'll] take the guy under my wing -- I'm considered a vet now," Griffin said. "After four years in the league, I've been through a lot more than a lot of guys go through their entire career. I've got a lot of experience and I can help a young guy. But that's not my focus. I don't pick the players. Sashi and Hue take care of that stuff. If they draft a quarterback, it doesn't bother me at all. I'm just ready to compete." 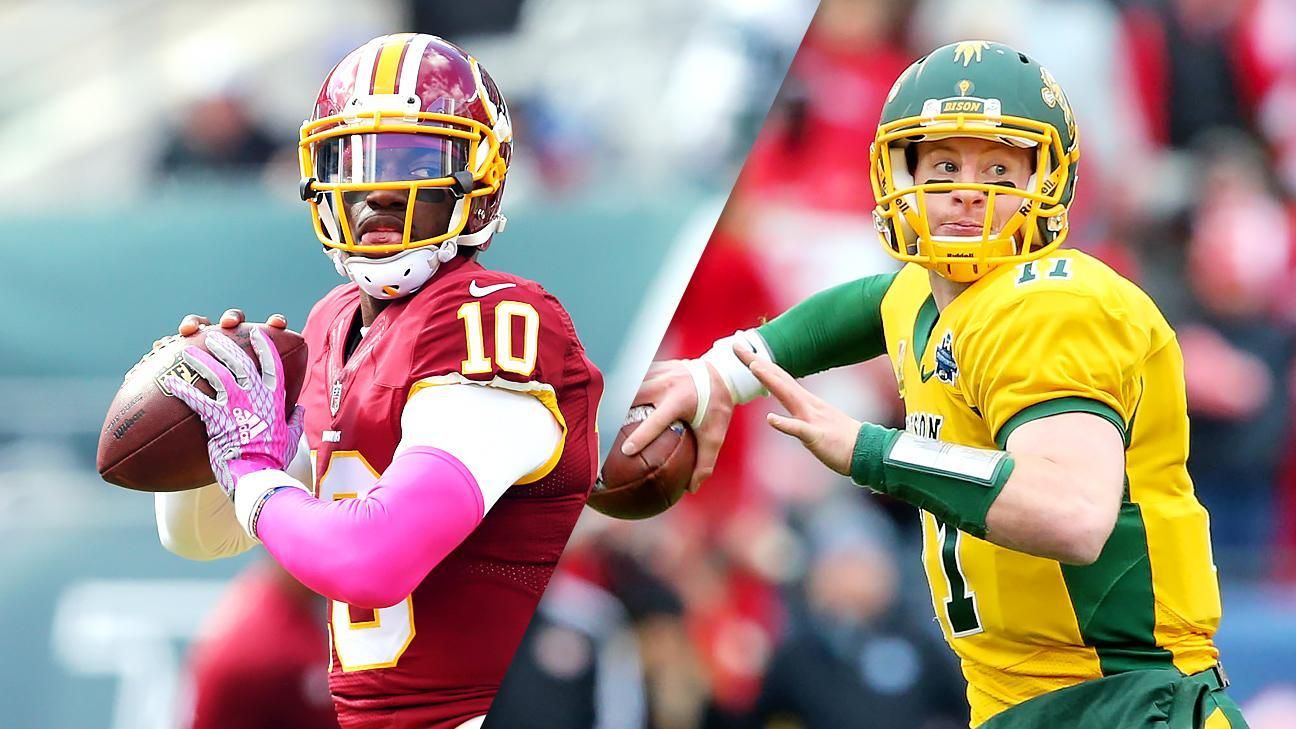 Browns still to draft QB despite adding RGIII
While the Browns are expected to reach an agreement with Robert Griffin III, ESPN's Adam Schefter still anticipates Cleveland drafting a quarterback with the second overall pick in the NFL draft. 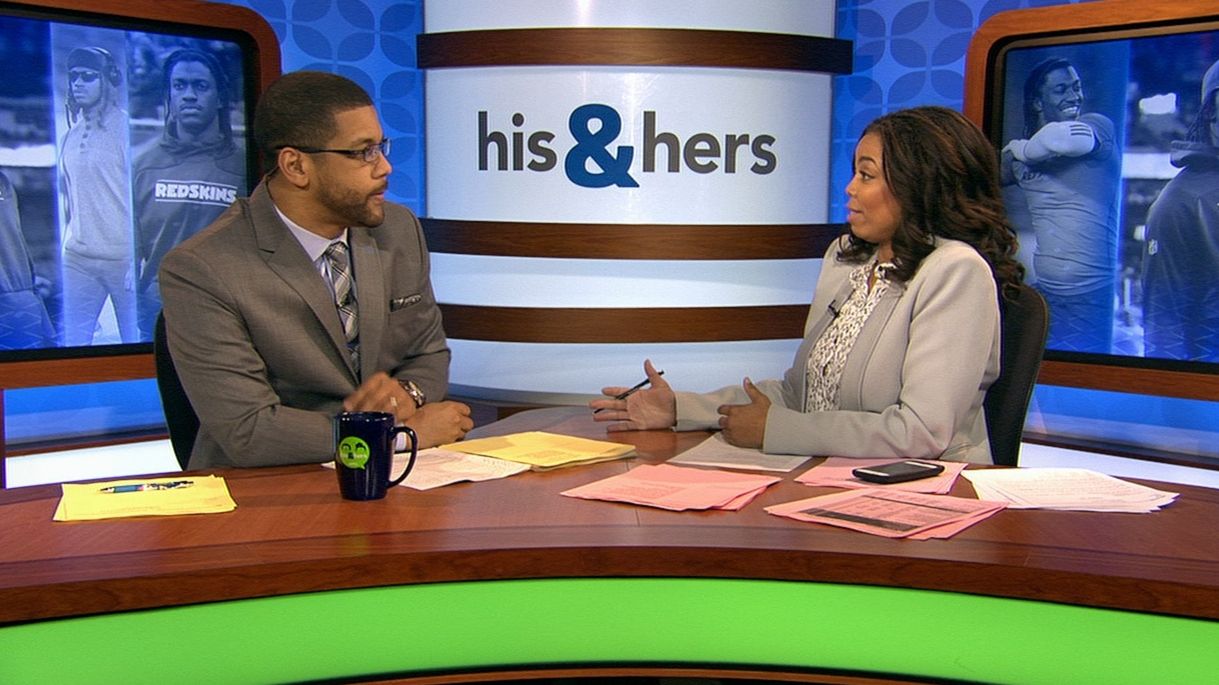