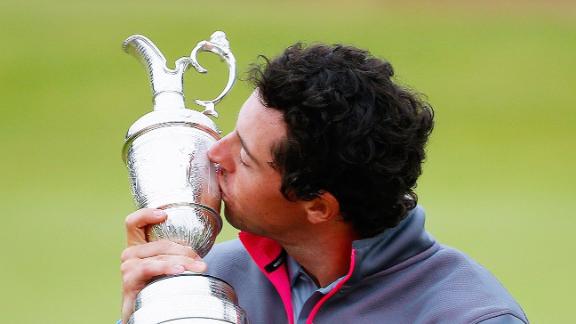 A spokesperson for British betting firm Ladbrokes confirmed on Sunday afternoon that it had held three bets that will allow Rory McIlroy's father Gerry and his friends to make more than $300,000 off his son's victory at Hoylake.

Ladbrokes first revealed on Twitter that it was paying out the winnings.

CONGRATULATIONS RORY: We're paying out 180k to Rory's Dad and pals. There'll be some party at the McIlroy's tonight! pic.twitter.com/wOG7vvIygd

- Ladbrokes (@Ladbrokes) July 20, 2014Two other bets, which Bridge says the firm believes were placed by friends of McIlroy's father, were placed in 2005.

"We take the chance on bets like these," Bridge said. "We can make a lot money, but it's a big risk if one comes through. Unfortunately, on this one, we have egg on our face. Rory's father and his friends are having champagne on us tonight."

After winning the tournament, McIlroy -- who won $1.66 million himself -- was asked about the bets, though it appears that the golfer thought his father won half as much as he did.

"Honestly, that 50 grand [pounds] that he's going to win is way -- I mean, the other three friends that he did that with, they're going to be very happy," McIlroy said to the press. "He's never reminded me. I knew that he'd done it. I'm not sure if it will pay out. If it does, it's a nice little bonus."

The bets are called special odds requests. People in Europe frequently call bookmakers like Ladbrokes to place a bet on their offspring winning some major sporting event. Bridge said the firm takes more than 300 of these bets a year and that one bet usually comes through every couple of years.

The big last one that paid off before today? When Lewis Hamilton was nine, friends and family placed a wager of under 100 pounds that he would one day win a Formula One race and also win the F1 championship. When Hamilton did both, the group collected roughly 125,000 pounds ($213,000), Bridge said.