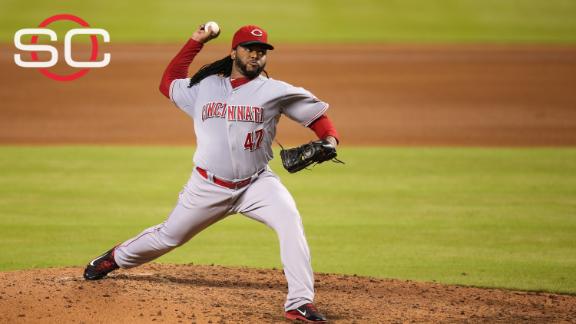 KANSAS CITY, Mo. -- The Kansas City Royals acquired Johnny Cueto in a trade with Cincinnati on Sunday, sending three prospects to the Reds for a legitimate ace for the front of their beleaguered rotation.

Kansas City has the best record in the American League after it lost to San Francisco in Game 7 of the World Series last October. But Yordano Ventura has underperformed this year and Jason Vargas will miss the rest of the season after he injured his elbow last week -- increasing the need for pitching help.

The Royals last won the title in 1985, and the trade was greeted with a loud ovation when it was announced during the third inning of Kansas City's home game against Houston on Sunday, a 5-1 win.

"I'm excited about my next chapter,'' Cueto said with Reds catcher Brayan Pena serving as his translator. "I know they play baseball very good. I'm excited because I know it's going to be good for my career and good for the team.''

Cueto, who is eligible for free agency after the season, had spent his entire career with Cincinnati. But the fourth-place Reds are looking to the future and could trade several more significant pieces before Friday's non-waiver deadline, including right-hander Mike Leake and All-Star closer Aroldis Chapman.

Cincinnati got minor league left-handers Brandon Finnegan, John Lamb and Cody Reed in the trade for Cueto, who was one of the top starters on the market. The Reds also are sending money to the Royals to help pay Cueto's remaining salary for the year.

"There is a lot interest in Johnny and we felt that this was the best value we could get,'' Reds general manager Walt Jocketty said. "Johnny is going to a great situation there. He has people that he'll know. He's on a team that has a chance to go to the World Series.''

Finnegan and Lamb were assigned to Triple-A Louisville, and Reed went to Double-A Pensacola.

Finnegan was selected by the Royals in the first round of last year's draft. He made seven playoff appearances in 2014, but has split time between Triple-A Omaha and Kansas City this year. The 25-year-old Lamb, a fifth-round pick in 2008, is 9-1 with a 2.67 ERA in 17 starts for Omaha.

Cueto, 29, won 20 games last season and is 7-6 with a 2.62 ERA in 19 starts this year. He pitched eight scoreless innings in Cincinnati's 5-2 victory at Colorado on Saturday night.

Cueto said a teammate had told him he already had been traded before Saturday's start.

"They said something to me," Cueto told reporters after Saturday's game. "I don't want to use a bad word in this location, but it was really bad the way I found out what happened. My head went around the whole way. My thoughts were all over the place."

Fox Sports reported earlier Sunday that Kansas City had been on the verge of acquiring Cueto but the deal fell through because a Royals player who was to be included in the swap had a medical issue. Sources told ESPN the teams still were working to make the trade happen despite Saturday's hiccup, leading to its finalization later Sunday.

"It's a very emotional time for me,'' Cueto said. "But I understand it's part of the game and I'm just excited about my next step.''

The deal for Cueto is indicative of the new reality for Kansas City, which used to trade away its top players for prospects at the deadline. Not so much right now, and the Royals are trying to take full advantage of their window for contention.

Several top young players, such as first baseman Eric Hosmer and All-Star third baseman Mike Moustakas, are eligible for arbitration and becoming more expensive by the year. While Royals owner David Glass has been willing to increase their payroll to franchise-record levels, Kansas City may have only a couple of years to make another run at a title before finances force the organization into rebuilding mode.

The deal also reunites Edinson Volquez and Cueto after the pitchers spent four years together in Cincinnati. The close friends are from the Dominican Republic, and Volquez, who signed a $20 million, two-year deal with the Royals this past offseason, served as a mentor to Cueto when he broke into the big leagues in 2008. They have even spoken of their desire to play together once again.

Information from ESPN's Jim Bowden and The Associated Press was used in this report.