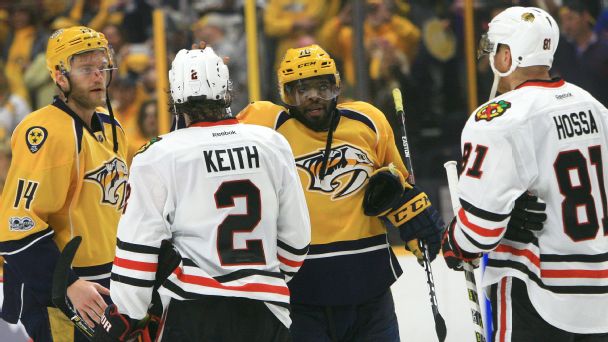 ESPN
By Greg Wyshynski
The Chicago Blackhawks finished with 109 points last season, atop the Western Conference. That earned them a first-round series against the Nashville Predators, the last wild card, who then swept Chicago out of the Stanley Cup playoffs.

But what if the Blackhawks could have simply chosen not to play the Predators? What if, as a reward for their regular-season success, they instead had the option of selecting the Calgary Flames, who were swept by the Anaheim Ducks? Would they have taken it? And if so, how ticked off would the Flames have been, knowing Chicago viewed them as an easier out despite being the higher seed?

These are the kinds of questions the Southern Professional Hockey League hopes its fans and teams will ponder under a new playoff format, one that's designed to create such controversy and consternation.

"It's kind of like, for lack of a better term, picking a fight with a guy," said Jim Combs, president of the SPHL, a 10-team minor pro league in the southern U.S. that was founded in 2004.

The new playoff format, borrowed from Austria's Erste Bank Eishockey Liga, allows the top three teams in the eight-team playoff field to select their first-round opponents from the Nos. 5-8 seeds. The top seed gets first choice, then the second seed and then the third. The No. 4 seed gets the team that is left over. All matchups are three-game series, and the winners are reseeded in the second round based on regular-season record.

No random draw. No lottery balls. No wild cards. Just one team pointing at another team and saying, "We can totally beat you," while creating a groundswell of debate over that choice.

"Our fans are going to be talking about it," said Combs. "Our coaches and GMs are going to have to strategize: If you're first, you may not want to touch eighth place because they were 10th two weeks ago and got all their guys back, are healthy and playing well. They might want the team that was No. 2 two weeks ago, fell and now they're in fifth place."

Can you imagine the magnitude of these decisions? Would the Blackhawks, for example, weigh their playoff and regular-season success against Nashville heavily enough to have picked the Predators last postseason? Would travel have been a consideration, versus a place like Calgary? And if it all comes down to rivalry ... well, heck, why not pick the St. Louis Blues instead?

"It's everything we like about sports, which is the competition and the rivalry," Combs said. "And it'll definitely cause more rivalry and passion between teams. Coaches and players don't want to be seen as the weakest link."

At this point, your reaction to this playoff format is either that it's the greatest thing since the Major League Baseball play-in game or that it's epically stupid. But Combs is OK with stupid because it's not like he hasn't heard it before -- like when the SPHL pioneered something else that caught on.

"It's the same thing people said when we did our 3-on-3 overtime," he said. "That we're dumb. And then people see it, and they start seeing how it works, and they're like, 'That might not be a bad idea.'"

A decade after the SPHL played it, the NHL adopted 3-on-3 overtime, for the 2015-16 season. Is it possible the senior circuit finds inspiration from the SPHL again, and one day adopts "pick your opponent" first-round playoff seeding?

"I think it would work at our level. And what about on the NHL level? How great would it be if the Rangers stand up and they pick the Boston Bruins in the first round?" he said.

Well, it would be great ... if it weren't for the nagging notion that this playoff format further devalues the regular season, as jockeying for seeds around the playoff bubble is rendered futile because the matchups are at the whim of the higher seeds. And it's hard to imagine that front-office personnel who steadfastly avoid audacious decisions would want to shoulder all the blame (and calls for their firing) for choosing the wrong team after an upset.

But mostly, this playoff format asks teams and players to defy their hockey culture programming and call out an opponent before a playoff series. In a sport that attempts to avoid bulletin board material at all costs, declaring one team to be, subjectively, the most inferior opponent is like putting up a billboard of ridicule.

"Obviously, it would be done professionally and softly, not trash talking and stuff," said Combs, before admitting that, yeah, it's still basically trash talking. "But at the end of the day, if you're Boston and you want Philly in the first round, it won't be softly. You're calling them out."

The uncomfortable, although deliciously fun, playoff team selection process will be held during a televised event by the SPHL on Sunday, April 8. Combs said his franchises have universally supported the format change -- at least for the upcoming season.

"If we made a mistake, we can just change it next year," he said. "But we're not afraid to take a chance."
Report a correction or typo
Related topics:
sportsespnchicago blackhawksnashvilleplayoff formatsidney crosbystanley cup playoffsnhlsphlnashville predatorsalex ovechkineastern conferenceauston matthewsconnor mcdavidplayoffswestern conference
Copyright © 2020 ESPN Internet Ventures. All rights reserved.
More Videos
From CNN Newsource affiliates
TOP STORIES