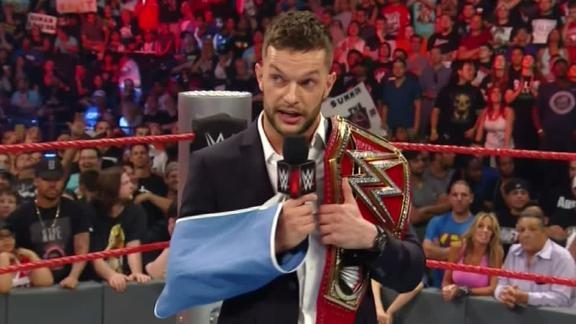 ESPN
By Arash Markazi and Nicolas Atkin
Finn Balor suffered a shoulder injury during his match against Seth Rollins at SummerSlam on Sunday night, WWE.com has confirmed, forcing him to relinquish the inaugural Universal championship.

The 35-year-old was injured when Rollins gave him a running powerbomb to the barricade in their title match at the Barclays Center in Brooklyn, New York.

Balor dislocated his right shoulder during the spot but was able to put it back in himself, according to WWE ringside physician Dr. Chris Robinson, before going on to win the contest.

An MRI later revealed a torn labrum. Balor will be out of action for up to six months, it was announced Monday in the opening segment of "WWE Raw."

Balor was unable to move his right arm during an appearance Monday morning on "Good Morning America" in New York.

"Last night was an unbelievable milestone moment in my career," Balor told ESPN before his GMA appearance. "It's something I never, ever expected to happen. It's still really hasn't sunk in yet. Talking about it Monday morning is a little difficult, but if you fast-forward a week, maybe I'll be able to articulate it a little better."

Balor became the first male superstar to win a world championship on his pay-per-view debut with his victory over two-time former WWE champion Rollins.