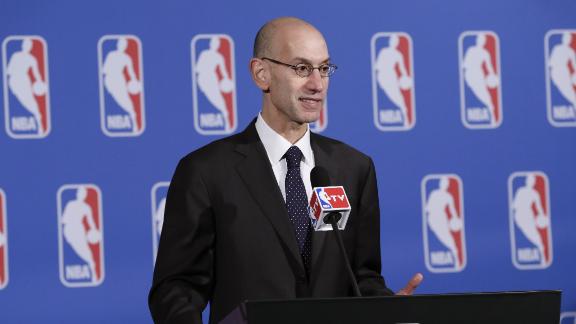 ESPN
By David Purdum
NBA commissioner Adam Silver wants the United States to get with the times in regard to sports betting.

In an op-ed posted Thursday on the New York Times website, Silver pointed to Europe's legal sports betting market and wrote that Congress "should adopt a federal framework that allows states to authorize betting on professional sports, subject to strict regulatory requirements and technological safeguards."

It's the third time since taking over for former commissioner David Stern that Silver has spoken out about his support of legalized sports betting in the U.S. His latest remarks come one week before a federal judge will rule on New Jersey's efforts to bring Las Vegas-style sports betting to its struggling casinos and race tracks.

The NBA and other major professional sports leagues, along with the NCAA, have sued New Jersey and asked for a permanent injunction to prevent the state from taking bets on sporting events.

The Professional and Amateur Sports Protection Act of 1992 (PASPA) prohibits state-sponsored sports betting in all but four states: Nevada, Delaware, Montana and Oregon. Nevada is the only state allowed to offer single-game wagering.

"Without a comprehensive federal solution, state measures such as New Jersey's recent initiative will be both unlawful and bad public policy," Silver wrote in the op-ed.

He added that sports betting is widespread and a thriving underground business, despite PASPA, but would like to see it "brought out of the underground and into the sunlight where it can be appropriately monitored and regulated."

"Times have changed since PASPA was enacted," Silver wrote. "Gambling has increasingly become a popular and accepted form of entertainment in the United States. Most states offer lotteries. Over half of them have legal casinos. Three have approved some form of Internet gambling, with others poised to follow."

Silver emphasized the need for strict regulation to protect the integrity of the games, including "mandatory monitoring and reporting of unusual betting-line movements; a licensing protocol to ensure betting operators are legitimate; minimum-age verification measures; geo-blocking technology to ensure betting is available only where it is legal; mechanisms to identify and exclude people with gambling problems; and education about responsible gaming."

The NBA signed an exclusive four-year deal with daily fantasy sports operator FanDuel this week, which gives the league equity in the company.

When contacted by ESPN regarding Silver's op-ed, NFL spokesman Brian McCarthy said the league had no comment. Major League Baseball also declined to comment. The NHL has not yet replied to a request for comment.