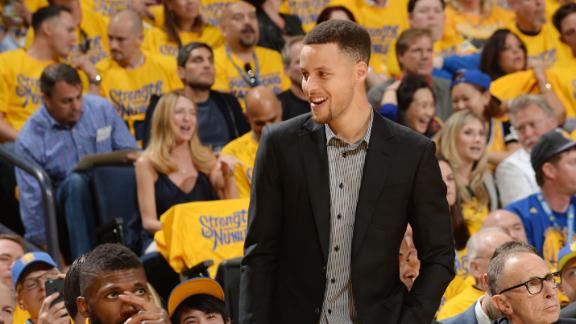 Stephen Curry underwent an MRI on his ailing ankle Tuesday, and the Golden State Warriors said the test did not reveal anything of concern.

According to the Warriors, Curry is expected to continue treatment in preparation for Thursday's Game 3 in Houston. He is listed as questionable.

The star guard sprained his right ankle during the team's Game 1 victory over the Houston Rockets in the Western Conference first-round playoff series. In the second quarter, Curry missed a shot, then twisted the ankle as he turned to get back on defense.

Curry tried to come back in the second half before quickly being pulled by head coach Steve Kerr. Curry did not take part in practice Sunday or morning shootaround Monday. He received treatment instead.

Curry then missed Game 2 on Monday -- also a Warriors win -- after cutting his usually extensive warmup routine short and leaving the court shaking his head prior to tipoff.

After the win, Kerr reiterated that the priority for the team is the reigning NBA MVP's health.

"We'll see how he responds the next couple of days, and if he's not right, obviously being up 2-0 does give us more cushion if we decide to sit him," Kerr said Monday night. "But it will be based on his health -- not the series score."

Information from ESPN.com's Ethan Sherwood Strauss was used in this report.