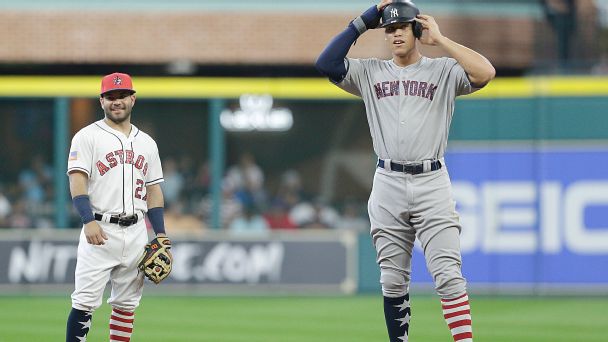 What will the year 2077 remember about the 2017 baseball season?

Yesterday, we analyzed the most remembered events, people, stories and statistics of Major League Baseball's past 114 years for clues to help answer this question. It can be hard to anticipate what will survive, with only some correlation between sports-page coverage and future interest. We identified seven categories -- plus subcategories! -- of events that are particularly durable. Now we'll overlay the 2017 season onto these categories so we can speculate responsibly.

1. Incredible achievement, usually captured by a single number or concept

Aaron Judge's 52 homers as a rookie were a record, and records tend to be remembered for as long as they remain records. Judge's season wasn't just a statistical achievement, though. It was an aesthetic masterpiece, with his size and strength and effortless power interacting with the juiced ball, the proliferation of Statcast fun facts and the Yankees' dramatic postseason run to define the season. It had a lot in common with Mark McGwire's rookie season -- 49 homers for an ascendant team during the rabbit-ball 1987 season -- and that season is very well remembered. Judge's -- much more than, say, Cody Bellinger's -- will be, too. That is, unless somebody hits 53 homers as a rookie in the next six decades.

This is a good first pick.

1b. Incredible team (often captured by a nickname)

Cleveland won 22 games in a row, which is ... sort of a record. It's unambiguously the American League record, though league records don't have much cache now that the leagues are barely distinct from each other. To people who discount the 1916 Giants' 26-game win streak -- because there was a game in the middle of it that ended (due to rain and darkness) in a tie -- it might even be the record. But those people have not yet won the argument, which is why one year ago, I couldn't have told you who held the non-Giants-because-there-was-one-tie record for longest win streak. (It was the 1935 Cubs.) Therefore, we must conclude that the Indians too will likely be mostly forgotten, despite winning 22 games in a row, which is, in fairness, a lot.

We'll get to the champion Astros in a minute.

Jose Altuve's three-homer game to kick off the American League Division Series is a dark horse. Three-homer games in the postseason used to be almost automatic immortality, but more postseason rounds and more homers have made these games more common. (There have been as many since 2010 -- five -- as there were in the entire 20th century.) But Altuve's is a better bet to survive than Enrique Hernandez's because the Astros went on to win the World Series and because Altuve did it in an MVP season. Still, it's doubtful.

On the other hand, I don't believe I've ever seen anything like the 2017 Home Run Derby -- and especially what Judge did in it, effortlessly cranking opposite-field homers and the occasional 500-foot blast while his peers giggled and shrieked. The question is whether this is simply a format that players have finally conquered -- Justin Bour hit 22 in a round, for goodness' sake, whereas there were five homers hit in the entire 1990 contest -- in which case next year's might top it. If not, I could see watching the 2017 Home Run Derby (condensed and commercial-free, of course) every year on the first morning of the All-Star break. In fact, I foresee myself watching it ... right now. BRB.

2. The moment the timeline begins

Nominations for this category are almost always impossible to see in the moment. I doubt anybody in the early 1900s thought Fenway and Wrigley would survive a century -- or perhaps even that Major League Baseball would. Meg Rowley, of Baseball Prospectus, suggested to me that in 60 years we might remember 2017 as the year the players' association started to die because (to some observers) the union conceded too much in the new collective bargaining agreement. But of course, 2017 saw only one small step toward one possible future for the union, and assessing what the players got or conceded in this CBA is itself impossible without years of retrospection and analysis. Which is to say, I like Rowley's suggestion. It's a creative and insightful suggestion, but we're mostly skipping this category.

Here's my sleeper: Austin Jackson not running out the dropped third strike of the American League Championship Series. Watch:

Gary Sanchez could have simply tagged him to complete the out, but instead he stuffed the ball in his pocket and ran out to the mound. Here's the rule:

Rule 6.09(b) Comment: A batter who does not realize his situation on a third strike not caught, and who is not in the process of running to first base, shall be declared out once he leaves the dirt circle surrounding home plate.
Jackson does not do that until Sanchez is already to the mound. Theoretically, even after Sanchez had abandoned the play, Jackson could have still run to first. See Todd Frazier, the Yankees' third baseman, pointing toward Jackson, acknowledging this risk. Sanchez would have had to take the ball back out of his pocket and tag or throw him out. A tag, let's assume, would have been impossible at that point. Note that the Yankees' first baseman, Greg Bird, doesn't appear in the first shots of the celebration, so perhaps he stayed near the bag just in case.

If Jackson had started running, would Sanchez have noticed in time to throw him out? If not, would the plate umpire have allowed it, or would he have declared that the play was already over? If he allowed it, would the Indians have completed a comeback against Aroldis Chapman? If they had, would the Indians have snapped their long World Series drought? If they had, would this have gone down, along with Mickey Owen's disastrous dropped third strike in the 1941 World Series, as an obit-leading blunder on Sanchez's part? Maybe the answer is no, to any or all of those questions. But the point is this is exactly the sort of play that doesn't seem that big in the moment -- it was barely noticed anywhere, wasn't mentioned on the broadcast, got a short write-up by Indians beat writer Paul Hoynes -- but has the potential to pick up intrigue decades later, when the principal actors get old and forgetful and the fundamental mysteries of the play become unsolvable. That's especially true if Cleveland's World Series drought stretches past a century. The Billy Goat wasn't a big thing in Chicago until decades afterward.

It's probably not going to be this play. But I could 100 percent imagine it.


There are no 2017 nominations for this category.

The juiced-ball timeline, if you haven't been quite clear on it, is this: Around the All-Star break in 2015, home run rates suddenly shot up, almost literally overnight. The evidence, from both writers and physicists, suggests that the spike is consistent with subtle (and perhaps unintentional) changes to the seam heights on major league baseballs. (Flatter seams lead to less air resistance and more carry.) But home run rates kept going up even after that, perhaps because hitters were tailoring their swings and approaches to an environment in which fly balls were more valuable. In 2017, a record 2.52 home runs were hit per game, a 9 percent increase over 2016, which had seen a 15 percent increase over 2015, which had seen a 17 percent increase over 2014. There were a record 25 homers hit in the 2017 World Series. There were eight home runs hit in one WS game and seven in another, compared to just six in the entire 2014 World Series.

But whether we remember 2017 as the juiced-ball year depends on whether things go back to normal in 2018. If they don't, then 2015 -- as the start of the home run timeline -- will probably be remembered as the change year, and some future season in which even more home runs get hit will be remembered as the peak Year Of The Dinger. However, if the seams rise slightly and home runs dip by 20 percent next season, 2017 will be remembered as the year it reached absurdity, and decades of future fun facts will end with "... since 2017." As in: "Scooter Cloddywomp homered three times against the Giants on Tuesday night. That's the most home runs by a Scooter in a single game since 2017."

6. When the larger world intersects with baseball or vice versa

There are no 2017 nominations for this category.

7. By being weird, by being almost literally unbelievable or inexplicable

Crucially, things that are somewhat inexplicable sometimes become much more inexplicable with time. There's a case here for the 2017 Astros, specifically as the fulfillment of the Sports Illustrated cover prophecy. As I wrote after Houston won the World Series, most of us are amused by the cover but recognize that it wasn't an outlandish prediction. But in 60 years, to people who didn't live through the #process, it could quite possibly take on the intrigue of ancient witchcraft. That's especially true if the game's economics change enough that the predictable teardown/rebuild cycle is no longer common or recognizable. Also, in 60 years, nobody might even know what a magazine cover is. "You mean it just showed up in people's houses? Some stranger just dropped a prediction that the worst team in baseball would win the World Series exactly three years later? Spooooooky."

But that's not my nomination here. Rather, it's this: The two best hitters in baseball were the shortest one and the tallest one. That is so weird, particularly because baseball is not a sport that naturally benefits short people or tall people. We all talk about it how short Altuve is and how tall Judge is; we talk about those things to death, and we still probably don't talk about them enough. It is so, so weird. And it's not weird in a deep, thought-provoking way. It's weird in the way that can be captured in one picture, a picture you have already seen -- 30 times? 40? In fact, it's at the top of this article. It's the one with Altuve and Judge standing next to each other at second base, one crazy moment in one wonderful image, and I don't believe there will be even one baseball fan in the next six decades who doesn't see it. The odds are that neither player will ever have a season as good as he just did. The odds are that this was the peak moment in extreme body outliers. And so that's my answer: 2017, the year of that photo, the year of that MVP race, the year of that ALCS. It was the year not of Judge or Altuve, but of Judge andAltuve.