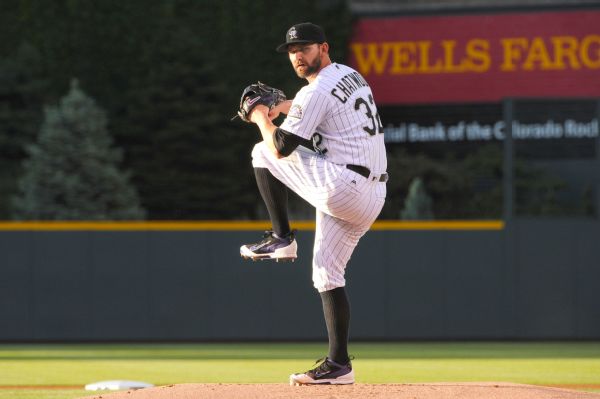 LAKE BUENA VISTA, Fla. -- Newly signed Chicago Cubs starter Tyler Chatwood might have to rework his contract due to a bonus structure tied to Cy Young Award voting in 2018 and 2019.

Chatwood, 27, last week signed a three-year deal for $38 million that included an escalator provision calling for his 2020 salary to increase by $2 million if he received a single Cy Young vote next season. His salary for 2020 would increase by $4 million if he received at least one vote for the award in 2018 and 2019. The Baseball Writers Association of America, which votes on the award, pushed back on the parameters, as they could lead to a conflict of interest.

Although he helped construct the terms, Cubs general manager Jed Hoyer agreed the system is flawed while arguing Cy Young voting is still the best option right now for bonuses.

"Teams have difficulty putting bonuses in," Hoyer said Tuesday afternoon. "Stats are flawed, All-Star Game is flawed, so postseason awards are it."

Hoyer pointed out a bonus structure for making the All-Star team recognizes only a player's half-season, while making the team can be a flawed process in the first place. End of the year statistics such as victories can also be flawed. Even innings pitched -- a common incentive -- has changed with the evolving usage of bullpens. Hoyer wouldn't mind a new postseason award to use for bonuses like an all-MLB team, which would be similar to what other sports use.

"If this is the one that brings that subject to a head, then I'm OK with that," Hoyer said. "I just hope that the writers will come up with something else the teams will use in order to put a contract together."

The problem isn't with bonuses tied to winning an award or even finishing in second or third. It's about relying on a single vote or two to determine millions of dollars. The last time a similar structure was put into a deal was for Curt Schilling and the Boston Red Sox over a decade ago. Hoyer worked in that front office as well.

If the contract isn't changed, there's a chance the BBWAA would not allow Chatwood to be eligible for the Cy Young in the first two years of his deal.

The Cubs were aware this issue might rear its head, and Chatwood's deal will likely work itself out without it being tied to a single Cy Young vote. Hoyer was more interested in the long-term changes that could stem from this conversation.