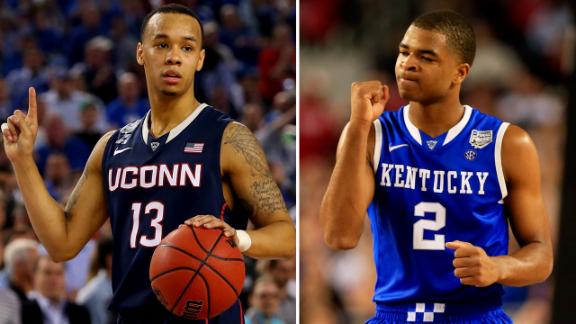 Cauley-Stein called it "heartbreaking" that he would have to watch the championship game from the bench. He hurt his right ankle in his NCAA tournament opener against Kansas State, played with pain in a victory over Wichita State and then aggravated the injury against Louisville.

He did not play at all in a regional final victory over Michigan, and was forced to be a cheerleader for a dramatic 74-73 victory over the Badgers on Saturday night.

The 7-foot sophomore said earlier in the week, "Don't count me out," when asked whether he might play at some point during the Final Four. But even after he discarded the walking boot that doctors ordered him to wear, the ankle has never felt good enough to get on the floor.

"That's the only thing I can really do is encourage the team to stay positive," Cauley-Stein said. "Even though I can't play, you know, I still serve a purpose of uplifting people and staying in people's ear and cheering and stuff like that."

Cauley-Stein averaged only seven points and 6.2 rebounds this season, but his ability to alter and block shots made him invaluable on defense. His height would have come in handy against UConn's playmaking guards, who love to slash to the basket.

His loss has been somewhat assuaged by the recent play of fellow 7-footer Dakari Johnson, who had 10 points and seven rebounds against the Badgers, and Poythress, a 6-8 sophomore who was 4 for 4 from the field and finished with eight points and seven boards in the semifinals.

Poythress hurt his knee in the wild midcourt celebration after Aaron Harrison's 3-pointer with 5.7 seconds left eventually lifted Kentucky over Wisconsin. Teammates rolled into Poythress's knee, and he yelped in pain before screaming at them to get off.

He limped to the postgame news conference, where he vowed to play in the title game, and told The Associated Press on Sunday: "It's fine. I'm ready to play. I'm good."

"I was going to go in the dog pile. My hip was bothering me so bad I couldn't jump on there," Calipari said Sunday, smiling. "But I was going in there, too.

"I mean, as a coach, it shows how together your team is," Calipari added. "It shows they bought into each other. They surrendered to each other. They're losing themselves in each other. Dakari's face when he came off the bench, I saw it on TV last night, was like euphoria, you know? And that's what you want to see, that. This is about them accomplishing something together."