We'll miss Connor McDavid, the Blackhawks, Henrik Lundqvist in the crease this postseason 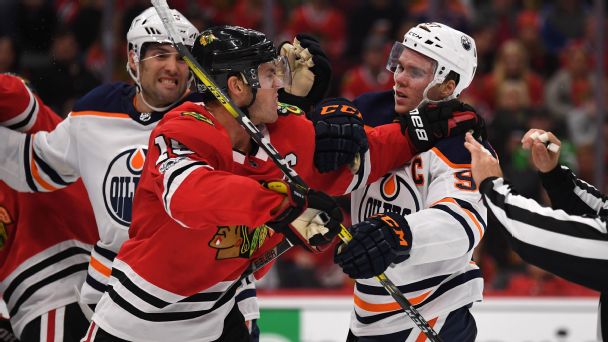 ESPN
By ESPN
The Pittsburgh Penguins are on a mission to become the first team in 35 years to win three consecutive Stanley Cup championships. The Vegas Golden Knights have captivated the hockey world -- and clinched a playoff berth -- in their first season. The New Jersey Devils snapped a five-year playoff drought, and Taylor Hall,their Hart Trophy candidate, punched a ticket to the postseason for the first time in his eight-year career.

Fans -- especially those in Nashville, Winnipeg and Boston -- have plenty of reasons to be pumped about the Stanley Cup playoffs. But there are are few things we'll miss this postseason.

What will you most miss seeing most this postseason?

Greg Wyshynski, senior writer:I know I'm alone on this island, because most of the hockey world considers them to be the most overhyped and overexposed team in sports, but I will miss the Chicago Blackhawks in the playoffs.

The Western Conference playoffs are just a more interesting place with the Blackhawks in them. Give me those hot takes aboutJonathan Toews'leadership vs. statistic achievement. Give me that inevitable Patrick Kane overtime goal. Give me a disgruntled Joel Quenneville putting his lines in a blender because his team lost by a goal in the third period. This is comfort food, and I'm a little bummed it's not on the menu.

Again, this might be the writer in me lamenting. The Blackhawks' redemption angle vs. theNashville Predators, their "gateway to eventual championship" status with a team like the Winnipeg Jets, and even some ginned-up "fake dynasty vs. fake dynasty" battle with the Los Angeles Kingswould have been chewy storylines. Alas, I'll have to settle for a few months of "can-the-Blackhawks-get-their-groove-back?" stories instead.

Emily Kaplan, national NHL reporter: The 2017-18 season felt like the year of unceremonious goodbyes. Jaromir Jagr is out of the league, without as much as a final wave to the home crowd in Calgary. (If you're reading this past 9 p.m. Czech Republic time, rest assured that he's probably doing some solo ice work out at a rink somewhere in Kladno.) The Sedin twins sure did entertain us in their Vancouver Canucks finale -- withDanielscoring the game-winner, with an assist fromHenrikat 2:33 of overtime. Come on. But let's be honest: it was a meaningless game against theArizona Coyotes.Sure, the teams were jockeying for (bad) standing in order to slightly increase their chances of landing top prospect Rasmus Dahlin in the draft, but that makes the farewell even less fitting.

These three players are going to be remembered as legends -- for their unique style, for their personality, for the indelible mark they left on the game. No doubt there's plenty of star power in these playoffs. Part of me, however, is itching for a proper farewell for these generational talents -- and one last chance at heroics.

Chris Peters, NHL prospects writer: Without a doubt, I'm going to miss Connor McDavid. Few players can match the entertainment value he brings on his own. Coming off of a career year, I can only imagine the impact he would have had in the second postseason of his career. That said, Edmonton has a lot of work to do to get itself back in contention.

That's the frustrating part about this Oilers season. McDavid has done all he possibly could, but the team around him didn't give him a chance -- and, in turn, robbed us of seeing the game's most electrifying talent on the biggest stage. We don't get many opportunities to see McDavid on national TV in the United States, so hockey fans down here certainly hear a lot about him, they just can't see him.

The young stars of the NHL are the most exciting thing about the league and its future. The more times a wider audience gets to see players like McDavid on TV, the more people will be exposed to his considerable talents. GettingToronto Maple LeafscenterAuston Matthewsthis postseason isn't too bad of a consolation prize, as the American-born talent should shine in this showcase. But it's going to feel a little incomplete without No. 97, too.

Ben Arledge, Insider editor: As someone who grew up in New York, I'll most miss the New York Rangers in the playoffs. With the Masters in full swing this weekend, it's perhaps on topic to say watching Henrik Lundqvist carry the Blueshirts on his back in April and May (and sometimes June) has become a tradition unlike any other. This will mark just the second time since King Henrik has manned the crease in Manhattan that the Rangers miss out on postseason play, and the other was after that final-day shootout loss to the Philadelphia Flyers to just fall short back in 2009-10.

Lundqvist is just one of a handful of stars who will take their talents to the golf course this season, rather than delighting the NHL playoff audience. Losing the Rangers goaltender, McDavid, Carey Price, Kane, Erik Karlsson, John Tavares and a cast of other dominant characters hurts the overall product a great deal. Without the bigger New York, Chicago, Montreal and Detroit hockey markets -- and the stars who come with them -- there's a missing level of engagement in an otherwise exciting two-month period.