Wiz's John Wall on dress code for C's rematch: 'All black everything. A funeral' 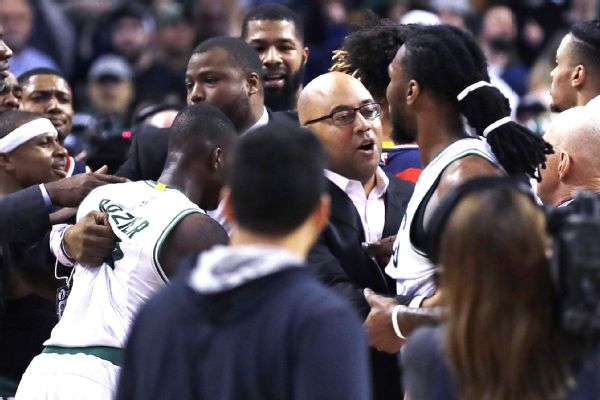 Washington Wizards players are planning to wear all black to Tuesday's home game against the Boston Celtics.

Recent games between the teams have featured chippy play and plenty of trash talk.

Celtics forward Jae Crowder and Wizards guard John Wall were fined after engaging in an after-the-buzzer dustup during the teams' most recent contest. That Jan. 11 meeting culminated with five Boston police officers standing guard between the two locker rooms at TD Garden after players continued to shout at one another upon leaving the court.

"We're wearing all black to the game. You know where we're going with that," Wizards forward Kelly Oubre Jr. told reporters in Charlotte, North Carolina, following the Wizards' 109-99 victory over the Hornets on Monday.

A follow-up question inquired as to whether the Wizards were preparing for a funeral or a war.

Reporters also asked Wall about the dress code, and he responded, "All black everything. A funeral."

"That's cute that they're wearing all black," Thomas said, according to CSNMidAtlantic.com. "I just kind of laughed [when I heard]. ... It's not like it's a Game 7."

Tension between the two teams dates back to last season, when Crowder accused former Wizards coach Randy Wittman of cursing at him. In the teams' first meeting this season, in November, Wall was ejected after a flagrant foul 2 on Marcus Smart.

Earlier this month, tempers flared again in Boston, when Smart was dragged to the floor on a foul by Bradley Beal. Wall exchanged words with Crowder after the buzzer of Boston's 117-108 triumph. Crowder poked Wall in the nose, and Wall responded by trying to slap Crowder before the two were separated.

On Monday afternoon, Celtics players said they expected another physical game and left open the possibility that tempers could flare again. But Crowder said he is not interested in engaging in extracurricular activity.

As Thomas said of another meeting with the Wizards, "We just gotta be ready for whatever comes our way. We're not going to shy away from it. We're all human, so there's probably going to be a little bit of physicality, a little bit of things that carry over for [Tuesday's] game. The most important thing we got to do is just try to take care of business and end their winning streak at home."

The Wizards have won 13 consecutive home games dating to Dec. 8.

New York Knicks players wore "funeral black" to a potential elimination game at home against the Celtics during the 2013 playoffs. Boston responded with a victory, forcing a Game 6 in Boston.

Entering Monday's action, ESPN's Basketball Power Index predicted a 20.1 percent chance the Celtics and Wizards could see each other in the opening round of the Eastern Conference playoffs. Boston currently sits third in the East, while the Wizards are fifth.

This won't be the final regular-season meeting between the two teams this season. Washington visits Boston on March 20.