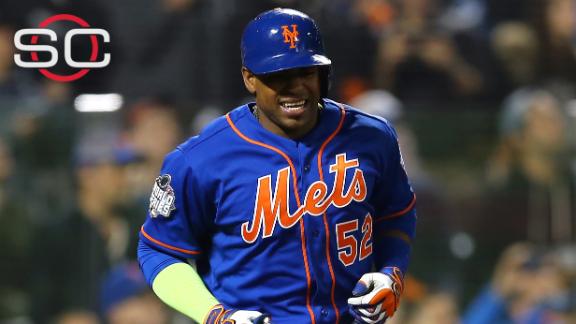 NEW YORK -- The Mets are expected to modestly pursue Yoenis Cespedes as a free agent, but a team official told ESPN.com it is highly likely he signs elsewhere.

The Mets' acquisition of Cespedes as a rental from the Detroit Tigers 13 minutes before the non-waiver trade deadline for highly regarded pitching prospect Michael Fulmer jump-started the team's moribund offense, fueling a run that ended with their World Series loss to the Kansas City Royalsin five games.

The Mets became the first team in major league history to reach the World Series after being last in runs scored in MLB on July 31.

Cespedes said he would like to return to the Mets.

"It's been an incredible experience," he said. "A very special experience for me."

Asked about his future, though, Cespedes added: "It's too early for that. My agent told me that we'll see what's going on around December or so. It's just too early."

Cespedes' contract calls for the outfielder to be released five days after the World Series, making him a free agent. As a result, the Mets will be unable to make him a qualifying offer as a vehicle to gain a draft pick if he signs elsewhere.