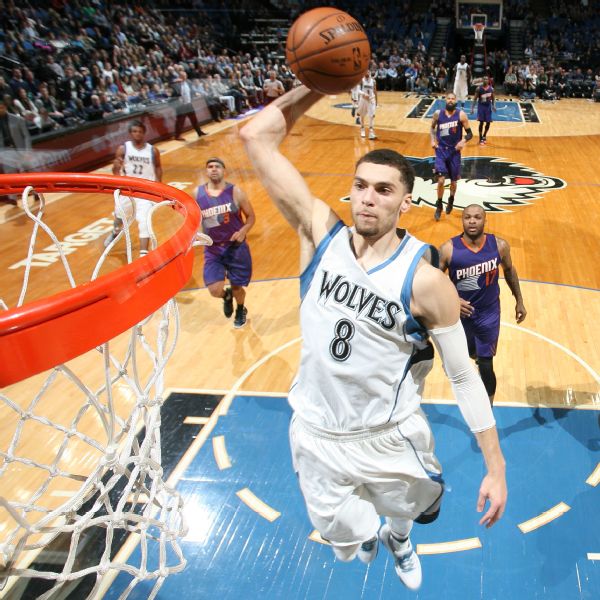 CHICAGO -- Bulls head coach Fred Hoiberg says that guard Zach LaVine won't start taking contact in practice until at least mid-November as he continues to recover from an ACL tear in his left knee. LaVine was working with Bulls staff members after Tuesday's first practice, but is not able to participate fully at this point.

"He's doing a lot of things," Hoiberg said after Tuesday's first official practice of the year. "Basically on a 1-on-0 workout he has no restrictions. He's doing a lot of extra running. He's been a monster in the weight room, he's putting up a lot of weight, which shows the strength of that leg is probably where it needs to be. But as far as letting that graft fully mature, generally from what we understand from our doctors is it takes a full nine months. Which would put us really in the middle of November before he would be cleared for any type of contact, so I do think it's safe to say he won't be with us on opening night but he's making great progress."

LaVine acknowledged as much during Monday's media day, saying his vertical numbers are higher than they were before his injury. LaVine tore his ACL on Feb. 3 in a loss against the Detroit Pistons.

"This was my first pre-draft workout, right after the combine, so they had all my measurements here," LaVine said. "My three-quarter sprint is faster than what it was. My first 10-meter sprint is faster. My standing vertical is higher. My one-step vertical is higher off two feet. It's been coming along really well. I was pretty surprised a couple times, like 'Oh wow, it's higher than what it was.' As long as I can keep progressing at this rate, you know, I'm going to be back doing better than I was before."

In the short term, that means LaVine has to watch from the sidelines or try to pick up various parts of Hoiberg's system during a "teaching segment" during training camp. No matter when LaVine ultimately returns to the floor, both he and the Bulls are confident that he will produce at a high level when he does. LaVine averaged a career-high 18.9 points last season and is a focal point of the deal that sent All-Star swingman Jimmy Butler to Minnesota on draft night.

"He's doing everything he should be doing at this time and is really ahead of schedule," Hoiberg said. "His numbers, as far as jumping, are as good as they were before the injury. Now the last step is getting him cleared for full contact, getting his timing and his wind back, getting him out there in scrimmage-type situations and hopefully getting him [back on the floor] shortly after he's cleared for that contact."

As LaVine works toward a return, he also acknowledged that he and his representatives had conversations with the Bulls' front office over the summer about an extension. If the sides can't come to terms before next month's deadline, LaVine is confident he will stay in Chicago for a long time.

"They've had some conversations," he said. "It doesn't really matter to me. I'm going to let all that take care of itself. I know I'm a big part of this team and I'm excited to be in negotiations with them. I want to be here for a long period of time. If it's now or later, I know it's going to be done either way. But right now I'm focused on basketball and getting my knee healthy. But it's always good to be in negotiations because it means you're wanted like I said. So we'll see where it goes. Still got a lot of time left to figure that out."
Report a correction or typo
Related topics:
sportsespnzach lavinechicago bullscontactaclnba
Copyright © 2020 ESPN Internet Ventures. All rights reserved.
More Videos
From CNN Newsource affiliates
TOP STORIES