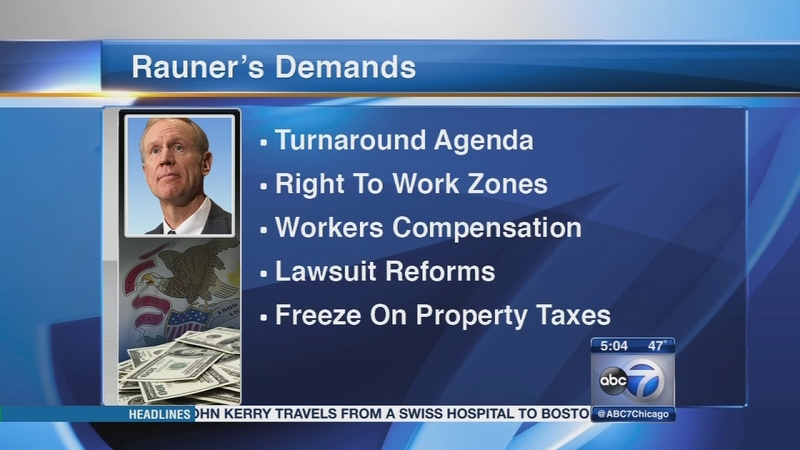 SPRINGFIELD, Ill. (WLS) -- The state Legislature ended its regular session Sunday afternoon without a deal on a balanced state budget, which means lawmakers will return to the Capitol for special sessions on the budget during the summer, with the House scheduling its first meeting for Thursday.

On Sunday night, Gov. Bruce Rauner sat down with ABC7 Eyewitness News and took aim at Democrats who hold super majorities in both the state House and Senate.

After midnight Sunday, adopting a budget requires a three-fifths vote of both houses. Majority Democrats in the General Assembly have approved a $36.3 billion spending plan they concede is short of at least $3 billion in revenue.

"They are for the political class," Rauner said of Democrats. "They are not for the middle class."

Rauner said he is undeterred.

"The folks who like the status quo, I hope they're scared because we're gonna change things," Rauner said.

Rauner is believed to be planning a statewide television ad campaign criticizing Democrats for not working together. The governor has never confirmed when or if he will begin a TV ad campaign against the Democrats, but he has $30 million to do so.

At the Capitol, Cullerton accused Rauner of trying to undermine the stalled budget negotiations. He, too, has heard the rumors that the multi-millionaire governor would unleash a television ad campaign.

"Instead of being here working with us on a budget, he's working on sitting down with his ad writers working on negative ads," Cullerton said.

The TV campaign would reportedly blame the Democrats for the state's fiscal crisis and repeat Rauner's demand for his pro-business "turnaround agenda," which includes right-to-work zones, workers compensation and lawsuit reforms and a freeze on property taxes. Democratic leaders - who hold a super majorities in their respective chambers - have blocked Rauner's proposals.

"The Democrats only want another tax increase, they have turned their back on reforms and compromise," said Republican State Sen. Christine Radogno.

It's unclear whether any progress would be made this summer with the governor, who appears not to be backing down.

"I think a lot of that is happening because the governor is insisting on putting non-budget issues in budget negotiation talks," said State Rep. Chris Welch, a Democrat representing the western suburbs.