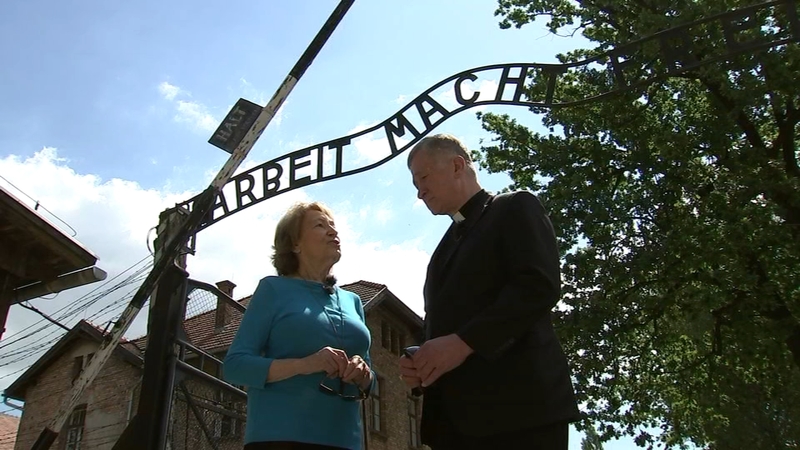 She's returned to see the camp before but now, more than seven decades after she was liberated on a death march from Auschwitz, Fritzshall returned for what may be the final time.

"The fear, the fear is still there, every time I come in... I see all the things that were happening here and I just have never walked away from that," Fritzshall said. "I am doing this because the Holocaust must never be forgotten."

She is not alone on this difficult journey; Fritzshall was accompanied by Chicago's Roman Catholic Cardinal Blase Cupich.

"Fritzie said she wanted to come to Auschwitz again," Cupich said. "Immediately I said, 'Well, I will come.'"

A Catholic Cardinal and a Jewish Holocaust survivor walked through that infamous gate with the mocking German words above: Arbeit Macht Frei, "Work Makes -- or Sets -- You Free."

"When you see it, and you walk under it today, what goes through your mind?" Alan Krashesky asked.

"When I see it the sign itself is a joke, because we know we all worked here and that didn't give us freedom," Fritzshall responded.

"What's really is disturbing that people today can tell lies that shape public opinion that dehumanize other people," Cupich added. "Auschwitz and places like this began with lies, with words."

You can hear those words, the Nazis demonizing Jewish people, at The Auschwitz Memorial and Museum, part of a Yad Vashem memorial exhibit located in one of the camp's bunkers.

The personal belongings of prisoners are displayed in room after room inside the concentration camp's bunkers. There are mounds of eyeglasses as well as crutches and prosthetics.

"This is about reality," Cupich said. "That's what hits you in the face, the reality of this crime."

Another room is full of suitcases.

Yet another room is filled with shoes of adults and children.

"You think of little girls with little decorative sandals and shoes, how delighted they must have been to have those bought for them," Cupich said.

Inside one block, there's a collection of empty canisters that contained poisonous gas pellets. The site also contains a building originally built as an ammunition bunker that the Nazis converted into a gas chamber and crematorium where it's believed almost 70,000 people lost their lives.

"You are a man of God, you are a religious man. What are the reasons?" Fritzshall asked Cupich.

"I have no answer. I have no explanation. How can somebody's humanity be so riven and shredded?" he said.

There's no clear answer for "why?" but there's a clear reason for this survivor to return nearly 75 years later, knowing it may be her last time.

Click here for more information on the Illinois Holocaust Museum.