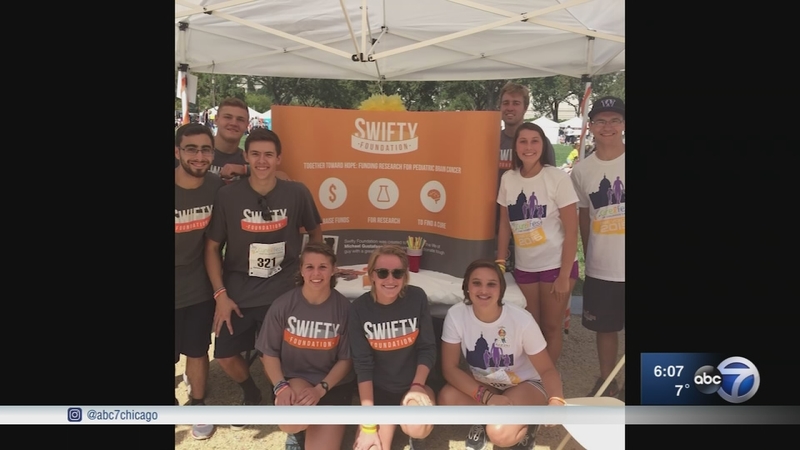 Five years ago a suburban family lost their son to pediatric brain cancer.

They have honored his memory by starting the Swifty Foundation to help raise awareness and money for research to fight the disease.

The Swifty Foundation was Michael Gustafson's idea before he died. With so little research and treatment options for pediatric brain cancer, Michael's goal in death is to help other kids survive.

Michael Gustafson was known as an affectionate tough guy with a great sense of humor. It's been five years since brain cancer took the teenager's life. Diagnosed at 10, Michael was 15 when he died.

"I'm 20, Michael would have been 20, knowing I've lived a quarter of my life without him is overwhelming, but also overwhelming to see all that he has accomplished over the years," said Bridget Gustafson, Michael's twin sister.

What Michael has accomplished is the Swifty Foundation, a non-profit aimed at raising funds and awareness for pediatric brain cancer research.

"As Michael found out he wasn't going to survive his cancer, he was having the crisis of meaning, what is my life going to mean, I'm going to die at the age of 15 how can that be," said Michael's mother Patti Gustafson.

Patti Gustafson's says the meaning of her son's life suddenly came to him after a family dinner, which he shared on video taken from his mother's phone.

Michael called it his master plan and explained in the video: "I'm going to give my life up, we are going to see if we can find a cure for cancer."

To help find a cure, Michael's plan was to donate his body to science. The Gustafson's learned about how little treatment options and research there is for pediatric cancers: only three drugs developed in the past 30 years and only four pennies for every federal dollar spent on kid cancers.

To understand brain cancer better, the Gustafsons say researchers are in dire need of tissue. The Swifty Foundation's program to educate families and secure tissue is now being utilized in 17 hospitals around the world.

On Saturday, some of the Gustafson's relatives and friends plan to hold a shave the head fundraiser for the Swifty Foundation.