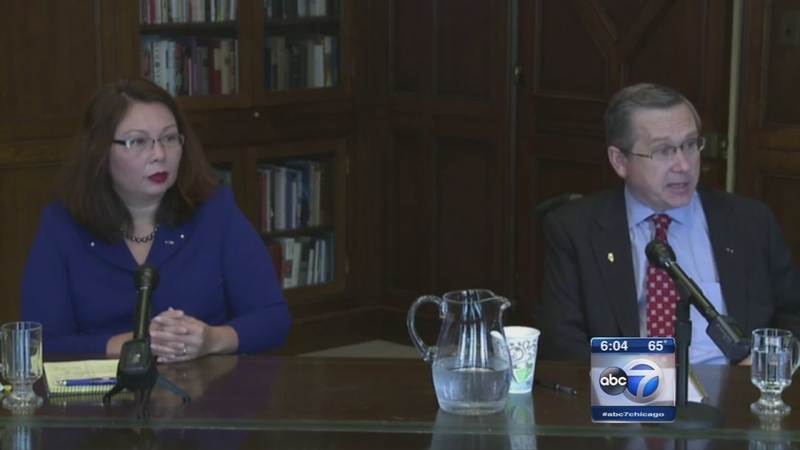 CHICAGO (WLS) -- Republican Senate incumbent Mark Kirk changed his mind about attending a debate here at ABC 7 during a face to face showdown with Democratic challenger Tammy Duckworth before the Chicago Tribune Editorial Board.

It was the first time Kirk and Duckworth had met face-to-face in the senate campaign. The incumbent stressed his record as a moderate in highly partisan Washington.

"I have sought to be the glue in the Senate to make sure that things happen," Kirk said.

"I think that it's irresponsible and not befitting a United States senator," Duckworth said.

"I would say that I have been too quick to turn a phrase," Kirk responded.

Duckworth criticized Kirk, who went against other Republicans when he called for a confirmation hearing for the president's Supreme Court nominee Judge Merrick Garland.

"It's one thing to take pictures and check the box for the media. It's another thing to actually follow up and demand a vote," she said.

"The way we move forward on Supreme Court justices is to have a hearing. I have already written to my colleagues to ask for a hearing," he responded.

"Give those resources to CPD to make sure they can build the intelligence and have the equipment to execute warrants," he said.

"We need jobs. We need jobs on the South Side of Chicago and a way to get to the jobs," she said.

As they were questioned near the session's end, Kirk and Duckworth appeared finally to agree they would debate on Chicago television stations, including ABC 7 and Univision.

"Be fine with me to do that debate," he said.

Monday afternoon, a Kirk spokesman confirmed in a phone call to ABC 7 executives that the senator would appear in a League of Women Voters debate to be aired on ABC 7 and Univision.