Phone scams on the rise as tax deadline looms 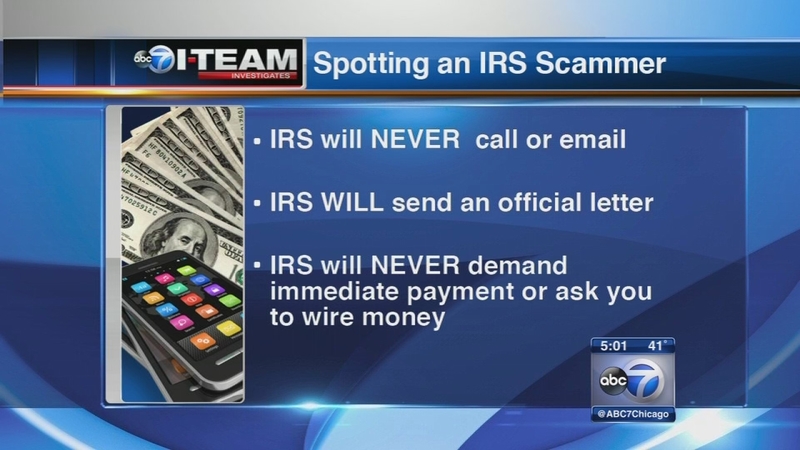 Phone scams on the rise as tax deadline looms

CHICAGO (WLS) -- A warning for taxpayers as tax day approaches: Some scam artists are using phone calls to try and take your money.

Thousands of complaints are pouring into government offices just days before the April 15 tax deadline.

The Federal Trade Commission says it gets about 10,000 complaints a month - and that's just one agency.

The IRS fraudsters are using spoofing technology and blocked calls to steal your money. But there are ways to catch the person on the other line.

A viewer recorded and shared a scam call with the ABC 7 I-Team; it's one of thousands of IRS scam calls hitting the Chicago area and nationwide. During the call, a woman demands money after claiming that back taxes were owed. Consumer protection groups say it's getting worse during tax season.

"I got a blocked call from someone who was claiming to be the IRS and was talking to me trying to get me to pay him some money over the phone and was threatening me that if I did not pay it, they would press charges. And I would be arrested," said Mordy Siegal, who received the call.

Siegal says he used technology from a service called TrapCall to uncover his blocked number and prove that the fake IRS call was coming from New Jersey.

"He told me he was out of Cleveland and the call was coming out of New Jersey so I knew it was a fraud," Siegal said.

A TrapCall basic plan will run you $4.95 a month. There are also other technologies that advertise similar, free services.

Tue Caller says it can give you more information about mysterious numbers and alert you to spam calls.

Siegal showed us how his app works when I blocked my number to call him.

The IRS will never call you or email you. They will send you an official letter in the mail if you owe taxes. They will never demand an immediate payment or require you to wire money.

"The guy was so persistent over the phone, he was so adamant that he was going to get me in trouble, I can see how people would slip," Siegal said.

In many cases, these calls come from numbers which look legit or even say "IRS" or Washington, D.C. on the caller ID. Those callers are using spoofing technology to fool you.

And remember, once you wire that money, it's almost impossible to get it back.

The ABC 7 I-Team first told you about this scam last year and there have been several reports of people losing money. To report these calls to the FBI and FTC or learn more, visit: