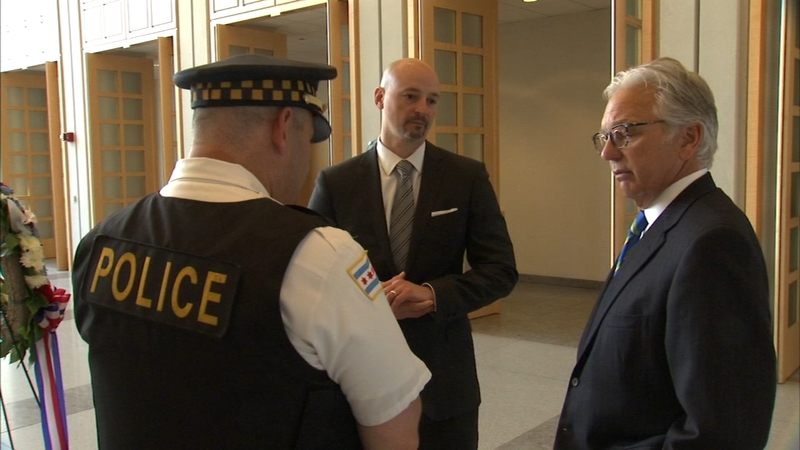 More than 100 law enforcement officers including federal agents, Chicago police and Illinois state troopers assigned to the Joint Terrorism Task Force have taken on the new "Summer Defensive" role in time for the customary start of the season next Friday with the Memorial Day weekend.

The task force will mobilize officers, assets and intelligence to protect concert-goers, festival fans and tourists who will flock to Chicago during the next few months.

What happened last fall in Las Vegas is a driving force behind the Chicago summertime protection plan.

On Sunday, October 1, 2017, the nation's worst ever mass shooting took place on the famous Las Vegas Strip. Stephen Paddock, 64, opened fire on a country music concert from a 32nd floor hotel window. Paddock managed to squeeze off more than 1,100 rounds during his sniper attack.

When the rain of gunfire ended with Paddock's suicide, 58 people were dead and 851 wounded or injured. No motive for the attack was ever identified by investigators.

For law enforcement officials here, what happened in Vegas isn't staying in Vegas. They say it looms large over Chicago.

But it isn't simply what went down in Vegas that drives public safety decisions in Chicago. It's also what was thwarted in Grant Park last summer.

Two months prior to the Las Vegas attack, Paddock had a room reservation at Chicago's Blackstone Hotel, across the street from last summer's Lollapalooza music festival. Paddock never checked in and the Chicago event was apparently never directly in his gun-sight.

According to Ryan, Paddock may have been deterred by CPD's formidable presence.

"We had specific assets we put in place and specific things that I think contributed to us not being a target," he said. "I would think it certainly didn't encourage him to come here. I can't get inside his mind you know he's not here to talk to so, but the bottom line is we present a picture to people that we are not a soft -- not an overtly soft target."

The city's layers of protection are going to be hardened this summer. Beginning with the June 1 Taylor Swift show at Soldier Field, concert-goers will see more police officers and more of them armed with heavier weapons. There will be a multi-layered approach to screening with expanded security perimeters and screening checkpoints.

"We can't put fences and gates around everything in downtown Chicago, but we do try to make it very unattractive to people that, that want to create havoc or so things of that nature," Ryan told ABC7 investigative reporter Chuck Goudie.

Goudie: "What would you say to parents who are bringing their kids downtown to concerts this summer? They've seen things happen in other places. How do you calm people to the thought that something could happen?"

Ryan: "It's scary. You know it is scary. But I would say to anybody we have professionals who are engaged in this that plan for this and that um we try to look at every possibility. Our kids live here our kids go to these concerts."

Even though mass casualty crimes are a focus of the summer defensive, a possible jihadist attack is always on the radar of the FBI here.

"Chicago is the third largest city in the country, it's an economic hub, it's well known around the world, it's a tourist destination, so obviously anything related to Chicago is going to draw the attention of individuals who we may not want to draw their attention from," said FBI assistant special-agent-in-charge Christopher Serdinak.

The leaders of Al Qaeda and ISIS have made it clear to their devotees in the U.S. that they should attack public events and gatherings such as concerts, festivals and sporting events whenever they choose and with whatever weapons may be available.

"That's what's making this so much more difficult for us to counter," said Serdinak during an interview with the I-Team at FBI headquarters in Chicago. "What a lot of these groups have done is they've almost gone low tech to the point that they want to inspire homegrown violent extremists in the United States who follow the ideology of maybe an ISIS to commit an attack with a vehicle or with a bladed weapon."