Fantasy Suite date becomes a nightmare for 'The Bachelor' Clayton 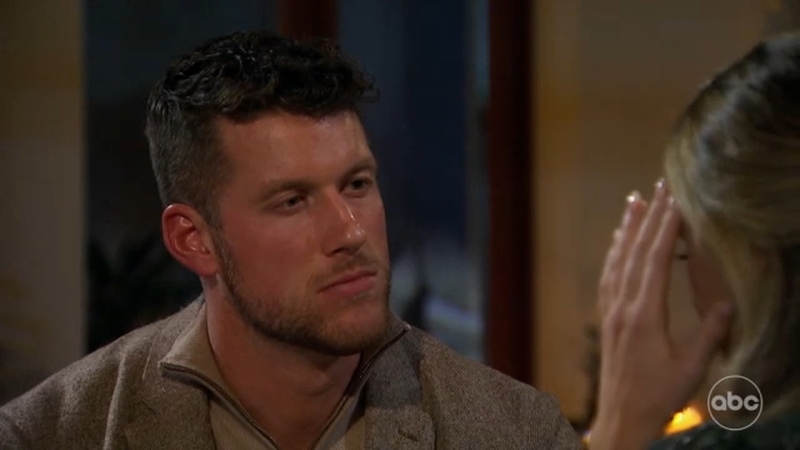 Clayton and Susie have a falling out on 'The Bachelor'

NEW YORK -- This was the most previewed episode probably in "Bachelor" history. It was finally time for Clayton's Fantasy Suite dates. We know from the preview he tells all three he loves them and that he sleeps with two of them. Who does he eliminate and will anyone leave after the revelation on their own? These are the questions "Bachelor Nation" has wanted the answers to all season!

The remaining three women, Gabby, Susie, and Rachel traveled to Iceland for their big Fantasy Suite dates. What a stunning backdrop for falling in love! At the start, Clayton said he was falling in love with all three and might even be "in love" with Susie. Will she stay the frontrunner? The three women sat in silence in the hotel while they waited for Jesse to arrive and tell them the order of the dates. They were all respectful of each other and there was no drama between them, it was more just a room full of nervous energy. Jesse brought the first date card and it read, "Rachel, Let's see how deep our love can go."

If you think you know what's coming next, think again. pic.twitter.com/OObNCaRj6A

Rachel's Fantasy Suite Date
Clayton met up with Rachel in the wilderness and they walked over to a clearing where there was a helicopter waiting for them. He took her on a sightseeing tour of Iceland from up in the sky, which, as a pilot, she was so excited to do. Clayton said that he has the strongest physical connection with Rachel. Eventually, they landed in the snow and kissed, but then Clayton stopped her and showed her that they were going to take a tour of a volcano! They got to climb inside and go 400 feet down in a metal cage. It was a bit Closter phobic but took it in stride. Eventually, they got to the bottom of the opening and they even got to get out of the cage and sit inside and talk inside the volcano. They chatted about how he felt meeting her family and he said he thought her family was great and Rachel said she loved that her family saw her being herself around him. Clayton said he didn't have any reservations about her or her family.

Emotions are at an all-time high. Tune in to #TheBachelor starting Monday at 8/7c to watch how it all plays out. pic.twitter.com/gLcOpxOIfU

During the dinner portion of their date, Rachel told Clayton that she couldn't read him during the last rose ceremony. She genuinely didn't know where he stood with her and it shocked her to think that she could actually be going home when she had previously felt confident about their relationship. Clayton told Rachel that he's had something weighing on him, and he didn't feel 100% transparent with her family. "I wish I had told you earlier, I was kind of holding on to it, so I'll just come out and say, like, I'm falling in love with you, I am, and I have been," Clayton said. Rachel cried as she heard those words! "I feel so much better," Rachel said. Clayton offered her the Fantasy Suite card and Rachel accepted it! They wasted no time hitting the bedroom and getting romantic. Meantime, Susie says in an interview that if Clayton thinks it's her in the end but has physical relations with someone anyway, she would have a really hard time with that.

The next day, they woke up together and happy in each others' arms. Well mostly, Clayton said his arm felt a little dead, haha! "Everything with us is easy," Clayton said. He also said in an interview that he loves Rachel. Then, he got up and they made breakfast together, mixed up with a bit of kissing. As he left the date, Rachel called down to him from the balcony, "Hey! I love you!" Clayton replied, "I love you too! All the time! I'm going to miss you!" They couldn't have been happier! Rachel returned and told the girls about the day portion of the date. Rachel said she was really sorry in advance because she knows how tough it is seeing each woman return home.

Gabby's Fantasy Suite Date
Gabby said she bundled up for the date and had no clue what they were doing. She stood alone waiting until Clayton drove up in a dune buggy. Clayton told her they were going to explore the beach in the dune buggy. Gabby said Clayton had a need for speed that she didn't really have! She did her best to take in the beautiful scenery as she held on for dear life. Once things slowed down a bit, they had a good time cruising the shoreline. Afterward, they sat indoors for some lunch and to warm up. Clayton told Gabby that he really loved meeting her family and especially her grandfather. Gabby said after the date she felt overwhelmed by her feelings. She decided to share with Clayton that she's ready to be engaged. Clayton seemed to really appreciate it and loved how open she was with him.

A date that represents the journey. Expect a bumpy ride from here on out, Bachelor Nation. pic.twitter.com/y7VtJP5Qhv

At dinner, Gabby said that she really liked how Clayton appreciates all of her different sides and listens to her. He told her that he can't believe how fortunate it is to receive her love. "I've realized that I'm falling in love with you, I am, I really am," Clayton said. "I have had these feelings but I wasn't allowing myself to admit it." Gabby said, "Thank you!" and kissed him. Then, he gave her the Fantasy Suite card which she accepted!

Back at the hotel, Susie walked down a spiral staircase as she talked about how her emotions were spiraling. She is upset that Clayton was probably being intimate with the other women and saying that he loves them. She just kept thinking of her worst fears.

Gabby and Clayton woke up happy and kissing. Clayton brought over breakfast in bed for Gabby and Clayton said things with Gabby are just easy. He says it's a very low-stress relationship. He said, "It feels so right." "You're easy to fall in love with," Gabby said to him. He never actually said the words, "I love you" to her. Gabby came back and told the ladies about her dune buggy date. She also talked about their remote room with a HUGE bed. Awkward Gabby, awkward. Then Susie told Gabby that she had bed head.

Susie's Fantasy Suite Date
Susie met up with Clayton on a very windy day and he told her that he hoped she had a bathing suit. Then they went into the Sky Lagoon that has hot springs! They started in cold mist, they moved into the sauna, and even outside! They took a cold plunge, and Susie took one dip and was like, "Come on, let's get out of the cold!" Then they gave each other salt scrubs and Susie loved that. They did a lot of kissing in the steamy shower. She said that she felt very reassured after they spent some quality time together. She admitted to Clayton that she was feeling nervous going into their date. He said he felt the same way. Later they swam in the open water as a waterfall rained down around them. It was beautiful! Susie said she's all in on Clayton. "The love for her is on another level," Clayton said.

Susie and Clayton have a Falling Out

But the, Susie said that she can't compromise on certain things, and she said if he loves someone else or if he's slept with someone else, that would be impossible for her to move forward with an engagement. Clayton teared up. "If I'm sharing your love with someone else, I don't think that I would be comfortable," she said. He said he understood her thought process. "You did say to explore the relationships..." Clayton said. "To answer your question, yes, I did sleep with someone else here," Clayton revealed. He also told her that he's told another woman that he's falling in love with her as well. Susie said it just didn't make sense to her that he could sleep with someone else. He said there are different feelings with different people, "It's very special where we are at." Then he said, "I am the most in love with you." She said it makes it worse and makes it sadder. "I don't feel like I knew how strongly you felt, and I didn't want to give you an ultimatum," she said. She just wanted him to do it without her having to ask. "I don't think I can get past those things," Susie told him. He said that if he knew it was a deal-breaker he would have changed how he approached things. He asked her to forgive him, but Susie said she wants someone who would have thought of her without her having to ask. Then Clayton revealed he slept with BOTH Gabby and Rachel. He asked her if they could spend the next seven hours talking and working it out in the Fantasy Suite. He threw it back on her that she never told him how important it was that he not say "I love you" or sleep with anyone else. Well Clayton, in the real world that's how it works, sooooo.... Susie got up from the table, said, "I can't," and walked off.

Clayton walked off and said this was exactly what he was afraid of and that he doesn't believe in anything anymore. Jesse walked over to Clayton who was spinning out and listened to what happened. "I don't know where to go from here," Clayton said. Jesse told him that he was sorry he was going through this. Susie suddenly walked up and Jesse was like, "Ok, I'll let you guys talk." She told him that she feels terrible about how things went. "I don't feel like I can leave here with you," Susie said. Clayton said well I guess that's it, I was hoping that you would change your mind, but oh well. "In my eyes, you just invalidated everything that we had," Clayton said. He said that he expected her to "work through this." Then Susie said she knows she screwed things up, she still has feelings, but she doesn't know what to do. Clayton said that he didn't even know who he was looking at anymore. It seemed like he was being really insensitive. He called the situation "BS" to her and said, "I'm done, we're done." Then he said he wanted to walk her out. She apologized a lot, and really though, did she need to? She had morals and things that she expected and those things weren't met. In the limo, as she left Susie said, "I thought he would have been better at getting through that conversation kindly."

Finale Preview
Next week, Gabby and Rachel find out what happened and even Clayton's parents aren't happy with him. "Welcome to the Rose Ceremony from hell," Jesse says in the preview. Jesse also says that he has news that will change everything for Clayton. Don't miss the two-night finale, next week on Monday and Tuesday.

Clayton Echard has been named the season 26 "Bachelor" on ABC.