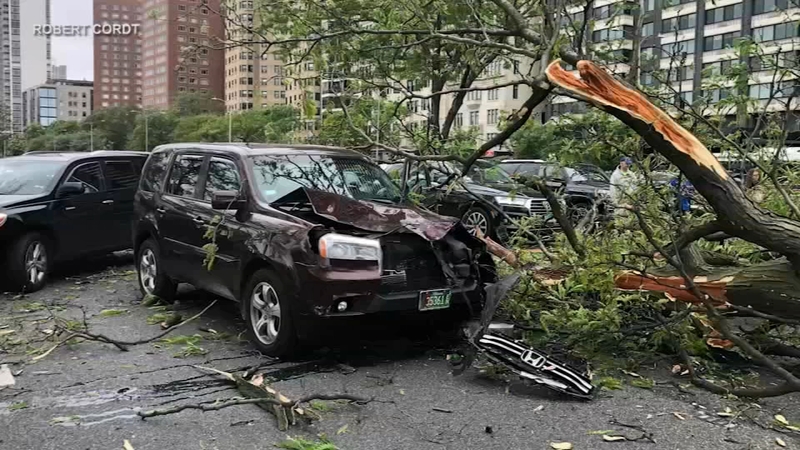 CHICAGO (WLS) -- A massive tree came crashing down on two cars as they drove on Lake Shore Drive Friday afternoon, sending one person to the hospital.

Chicago Fire Department officials said the "healthy" tree fell in the northbound lanes near Schiller Street in the Gold Coast.

Video captured the moment merciless winds split the lakefront tree in two, sending half of it cascading into oncoming traffic.

The tree landed on a red SUV, pinning two men inside who had just arrived in Chicago on vacation, according to a retired Chicago firefighter who happened to be in the car right behind it.

"If I'd been a little heavier on the gas pedal, I could have gotten hit," Robert Cordt said. "Saw it hit the other car and laying across all four lanes of Lake Shore Drive, so I hit the brakes as hard as I could."

The Chicago Fire Department worked to remove a large tree that fell on Lake Shore Drive Friday afternoon near Schiller in the Gold Coast.

Cordt's SUV slammed into the tree, but not with quite the immediate impact as the one just in front of him. The second the 24-year veteran of the Chicago Fire Dept. knew he was alright, he ran to help the SUV in front of him.

"They were OK, they had a little blood on them," he said. "It was from the broken windshield, and the airbags forced the glass shards into their face."

The windshield was shattered and the front end of both SUVs severely dented, but as traffic behind them stood at a standstill, both banged up vehicles were able to clear the road.

Officers from the CPD traffic unit along with @ChicagoCAPS18 responded quickly to an accident on Lake Shore Drive involving a large tree & multiple vehicles.

Three people in the crash refused treatment, while one person was taken in good condition to Illinois Masonic Medical Center, Langford said.

The aftermath was broken and messy, leaving a line of holiday traffic blocked and bottlenecked as crews scrambled to clear the tree.

"The tree came down in the wind. It made a nice slice down the trunk of the tree. Half of it fell," Chicago Fire Department spokesman Larry Langford said.

Winds were gusting at 35 mph at O'Hare Airport on Friday afternoon, according to the National Weather Service.

A high wave warning closed most of Chicago's beaches to swimming on the first day they were to be reopened since closing over a year ago because of the coronavirus pandemic.