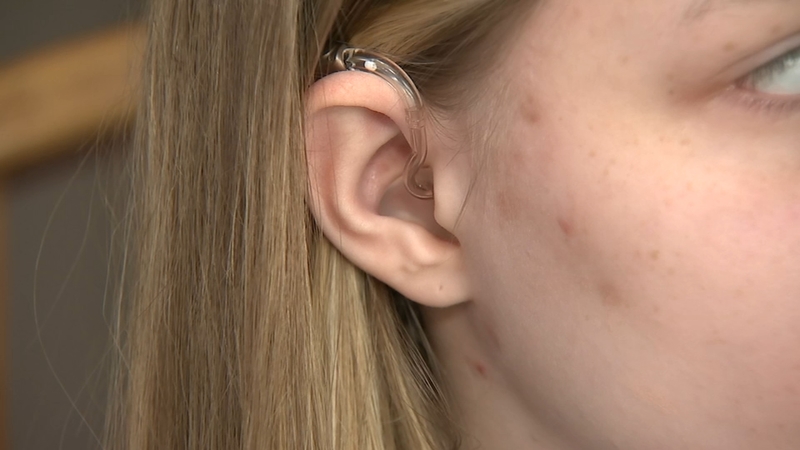 GRAYSLAKE, Ill. (WLS) -- An Illinois state law requires all insurance companies to cover hearing aids for kids 18 and under, so why did one Grayslake family get denied?

Sydney is 16 years old and she's been wearing hearing aids since she was a baby.

Thanks to her father's military benefits, her family didn't have to pay a dime for the devices. But after he retired, everything changed.

"She was three pounds, five ounces so we knew she was a preemie from the start," said Lori Mitsch.

Lori knew that her daughter may have some challenges, but she was heartbroken when she learned her little girl couldn't hear. Sydney was diagnosed with severe bilateral conductive hearing loss.

"Devastated because you just want an easy life for you children," Lori said. "My kids are everything to me."

But the military family fought for Sydney to live a normal life and thanks to her father's military insurance through Tricare, she was able to get hearing aids every three years for free.

But over time, her father had his owns struggles, suffering from degenerative bone disease. He would have to retire and his medical benefits would change.

Tricare informed the family that Sydney's hearing aids would no longer be covered, costing the family roughly $6,700 for the devices.

They say as a result, she's been wearing hearing aids that are more than a year old and could die out at any moment.

"I feel bad for my mom and my dad because they have to go through this and they've already done so much," Sydney said.

But the family thought they discovered a solution. They learned the state of Illinois passed a law in 2018 requiring insurance companies to cover hearing aids for kids under 18 years old.

But then, more bad news. The law only applies to state and local programs, not military plans, which are federal.

ABC7 reached out to the U.S. Department of Defense, the provider of Tricare benefits.

I refer you to the below link where additional information can be found: https://www.tricare.mil/CoveredServices/IsItCovered/HearingAids.aspx."

It's a huge letdown for Sydney and her mom, who are running out of options.

"A child born with a disability has had their benefits taken away, from a soldier whose been with the military 30 years," Lori Mitsch said. "Even though he's retired, that should still be a covered service."

"We only want one thing and sure, hearing aids are expensive but they've done it before," Sydney said. "Why now?"

The family said they aren't giving up their fight to get Sydney her hearing aids. They plan to appeal the insurance's decision.

Illinois State Senator Laura Fine, who sponsored the hearing aid bill which is now a law, said, "We passed House Bill 4516 to ensure that Illinois families have access to hearing aids without worrying about prohibitive costs-overcoming deafness or a hearing-related challenge through readily available technology shouldn't be a luxury afforded only to the rich. I was frustrated to hear that the Mitsch family has had such difficulty finding care for their daughter, Sydney.

"Humana Military partners with the Department of Defense to administer the TRICARE health program to military members, retirees and their families. Unfortunately, that means that the Mitsch family has a federal health plan, which isn't under the jurisdiction of the Illinois Department of Insurance. Therefore, TRICARE doesn't have to provide the same coverage as a state-administered plan.

"I hope that the federal government will see how many Illinoisans benefit from this law and decide to follow suit. In the meantime, I encourage the Mitsch family to file a complaint, appeal or grievance with TRICARE-I hope that the company decides to do the right thing and expand their coverage."