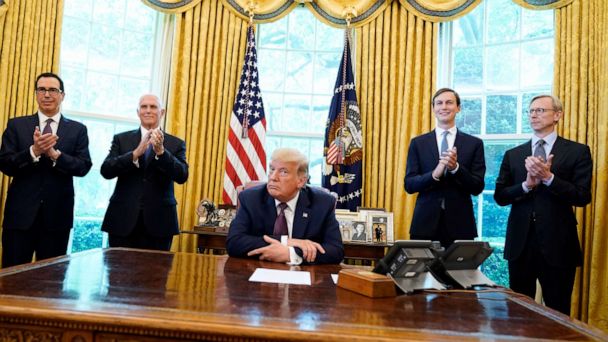 Bahrain will participate in what will now be a three-way signing ceremony at the White House Tuesday with Israel and the United Arab Emirates.

Speaking from the Oval Office Friday afternoon, Trump said it was "a truly historic day."

With the UAE also agreeing to work toward normalization of relations with Israel, Trump called it a "previously unthinkable regional transformation."

The president added that the date of the announcement was a surprise but that "it's so interesting that it's on 9/11."

Trump suggested that the moves toward normalization between Israel and other Arab countries might somehow entice the Palestinians to join in.

The deal, however, represents another hit to the Palestinians' call for Arab nations to abstain from normalizing relations with Israel before it resolves its conflict with the Palestinians.