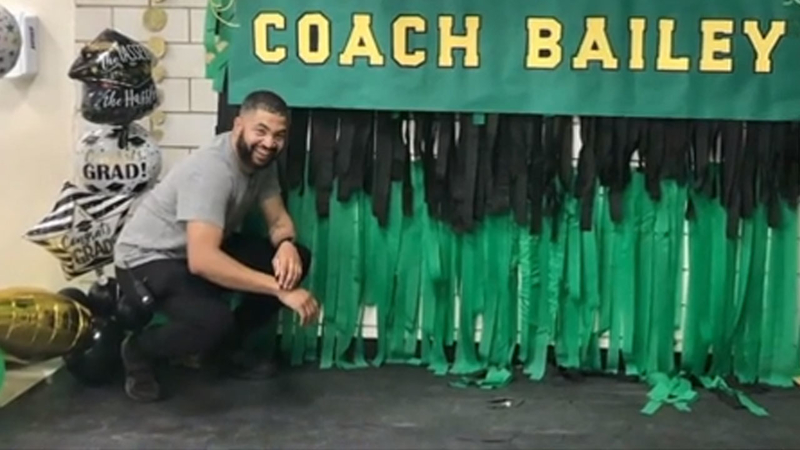 ATLANTA -- A longtime school custodian who graduated from college in his 40s so he could fulfill his dream of becoming a physical education teacher received the surprise of a lifetime Monday live on "Good Morning America."

"Jungle Cruise" stars Emily Blunt and Dwayne Johnson surprised the teacher, Tylan Bailey, with an invitation to the California premiere of their new movie, as well as roundtrip airfare to California for him and his family, plus hotel rooms and park passes at Disneyland.

"What a journey and how inspiring your story is," said Johnson. "We're proud of you."

The actors star in a fun adventure story based on one of the original rides at Disneyland.

Added Blunt, "You just keep shining your light. You're amazing."

Bailey, who will start this fall as a physical education teacher at Briar Vista Elementary School in Atlanta, was also surprised on "GMA" with an at-home Echelon bike and treadmill, as well a $15,000 donation from Echelon to his new school.

"I'm kind of speechless," said Bailey, who explained that he reached his goal of becoming a teacher by following the motto, "Meet your blessings halfway."

"Your blessings will come to you if you go for it," he said. "Sometimes we want blessings to come to us. Just meet them halfway and you'll get there."

Bailey, a father of four, worked as the head custodian of Hightower Elementary School in DeKalb County, Georgia, for 23 years, before registering for college in 2017 at the age of 39.

After four years of balancing his full-time job as a custodian with being a dad and college student, Bailey earned his bachelor's degree in physical education from Georgia State University.

He did so with the support of not just his family, but also his fellow staff members and students at Hightower Elementary.

"I feel blessed to have a community, a family of people who really supported me throughout this journey," said Bailey. "It's been tough."

"Through his journey of becoming a teacher, everyone has really admired how hardworking he is and determined he is," she said. "And we're all so inspired by him."

Bailey's wife, Areka Bailey, said his journey to become a college graduate and teacher has also provided motivation to his family.

"He's told me stories about cousins calling him saying, 'I heard about your story, man, I'm proud of you. You're my motivation. Now I know that I can do it too. Nothing is holding me back,'" she said.

Bailey's mother, Geraldine Mims, said she believes that her son is just getting started, saying, "He's going to keep climbing the ladder as high as he can go."