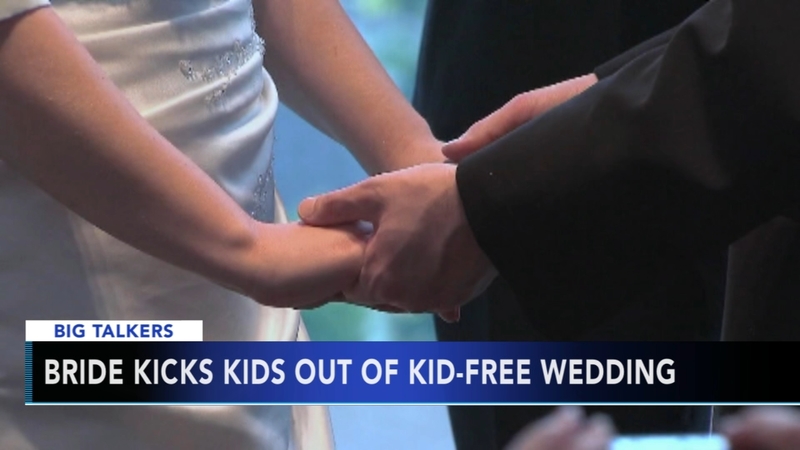 An anonymous newlywed is going viral for the question she posed on a Reddit thread.

The woman wanted to know if she was wrong for kicking a couple out of her wedding after they brought their children to the explicitly kid-free event.

In the thread, the bride explained that the invitations explicitly told guests the ceremony and the reception were adult-only events, excluding the little ones who were actually in the wedding, though those kids were picked up before the reception started.

But long-time family friends, who the bride says she's not very close with yet felt obligated to invite, decided the rules didn't apply to them and brought their infant and toddler.

The bride told the thread she let it go during the ceremony, even though the baby was fussy during their vows.

But when the couple brought the children to the reception, the newlywed decided to send her event planner over to see if the couple had arranged for someone to come get the kids, who were growing more cranky.

When the couple started to argue with the planner, the bride stepped in, only to have her family friend tell her they were perfectly capable of minding their own children.

In the end, things got a bit heated and the woman confessed she snapped and told the couple they needed to go.

The post generated thousands of responses, with most people agreeing the woman was perfectly within her rights to kick them out and the couple was in the wrong.

But others, including some in the bride's own family, disagreed, saying she should have ignored it instead of embarrassing the couple.
Report a correction or typo
Related topics:
societyredditchildrenu.s. & worldbig talkersweddingviral
Copyright © 2022 WPVI-TV. All Rights Reserved.
TOP STORIES
5 tax changes that can boost your refund this year
Family demands justice after 23-year-old woman found dead after date
Chicago weather forecast includes snow into Monday | Live radar
Fauci optimistic omicron will peak in February
Overdose investigation leads to $6M worth of cocaine in Wisconsin
After the omicron wave, what's next for the COVID pandemic?
2022 inflation: Expert tips to navigate food, gas prices rising
Show More
Illinois driver's license facilities to resume in-person services
Girl, 8, killed by stray bullet ID'd: ME
19 shot, 4 fatally, in Chicago weekend violence
Rescuers use sausage dangling from drone to lure runaway dog to safety
`Dreadhead Cowboy' pleads guilty to animal cruelty charge
More TOP STORIES News