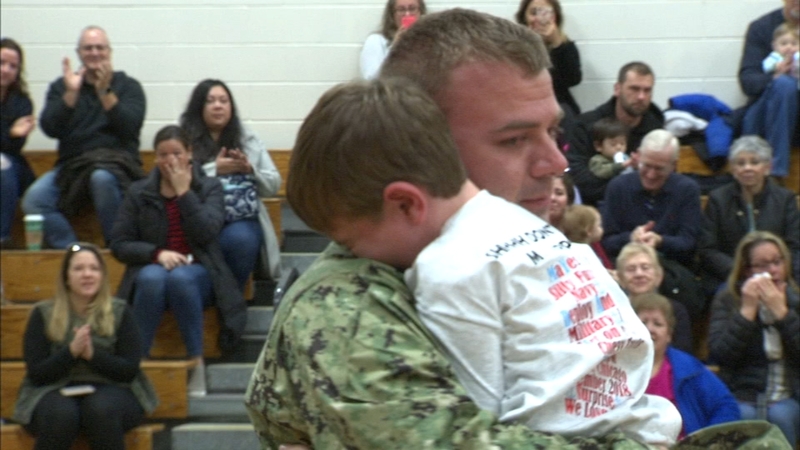 The happy reunion took place at a school assembly honoring military veterans at Fremont Elementary School in Mundelein. First grader Colton Mayes had reason to be proud: His dad serves in the Navy, based in Jacksonville, Florida.

William Mayes was first deployed when his son was just 2 years old. Colton hasn't seen his dad since April. The 6-year-old was hoping he would be home in time for Christmas.

Little did he know his father got home late Sunday and was waiting in the school's main office.

"He still thinks I'm deployed," William said before the surprise. "We were in the arctic region and he thinks Santa is bringing me home."

The Mayes family, minus father William, moved to Mundelein from Florida before the start of the school year. William has never gotten to see his son's school.

"He told me all about his dad," said Taylor Hulse, Colton's first grade teacher. "He's really been looking forward to his coming home."

William Mayes' first visit to the school is one that no one will soon forget. As a teacher welcomed all the veterans in the audience to come forward, he invited one more person to join. Officer William Mayes walked in to loud applause, while Colton seemed to be in disbelief.

Father and son soon embraced in a hug that would melt away all the months apart. And it seems the pair won't be separated any time soon: William is transferring to Great Lakes Naval Base in North Chicago, allowing him to be a dad while deployed.

"Couldn't have asked for a better moment so far," William said. "I'm just excited that I'm finally home and he gets to share in the excitement now. It's been killing me the last 24 hours 'cause, like I said, we spent last night at a hotel literally right up the road so it's been eating away at me."

Wife Traci is also excited about her husband's new assignment as it's been difficult on the whole family to have William away.

"Now that daddy's home, it's going to be much better. This will be a step forward," she said.

Officer Mayes has two weeks free before he has to report to Great Lakes. He has big plans for that time off.