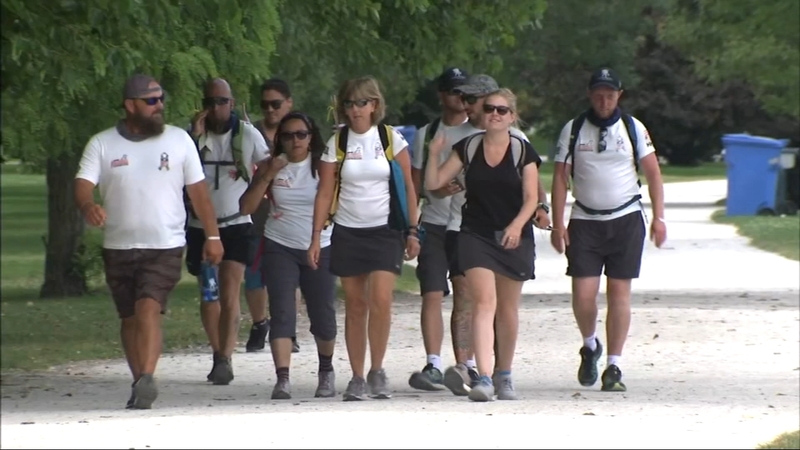 A special team of veterans was in Chicago Friday.

They are walking across America to raise awareness that veterans can come home with wounds you can see as well as invisible wounds. It brings together vets from the U.K. and United States suffering from PTSD, depression and more.

This group just hit 600 miles on their journey, only 400 more to go before they get to New York, but during their 17 mile trek here in Chicago these veterans said they were drawing strength from each other and the community.
"Not only is it therapy, you kind of get to walk, clear your mind. But you get to spend it with people you love, people you consider family," said U.S. Marine Corps Sergeant Larry Hinkle.

Hinkle has been on the road with his team walking from Los Angeles, California, through the Southwest, now Chicago, and eventually on to New York for almost two months now.

Hinkle said the mission has a clear message for veterans:

"To let those veterans know that are in the dark places that we've been in, that there is a way out. Don't give up," he said.

Everyone on this team is facing some sort of injury - physical, mental, emotional, or all of the above. Sergeant Hinkle lost a colleague in Iraq after his vehicle was hit while on patrol.

"So survivor's guilt creeps in. I've had five surgeries on my knee, so the pain pills compounded with alcohol, you know, all that stuff starts to compound and you kind of lose sense of who you are yourself," he said.

And he's not alone, which is exactly the point.

"It all came to a head that either I was going to kill myself or I need to get help. And thankfully two nonprofit organizations really helped me out," said Air Force Master Sergeant Adele Loar. She lost her eye after an enemy attack that killed two people in the vehicle she was in. Now, she said she's gained a new family walking together with these wounded vets.
"It's just like being in the military. I've got my brothers around me everywhere. So you couldn't ask for a better support system than these guys," she said.

"The veterans that are struggling out there that we are getting these messages to, they then have the confidence to stand up and say look, I have an issue and I need help," Burns said.

The walk ended at Soldier Field for the day.