Students show off skills at VEX Robotics competition in Chicago 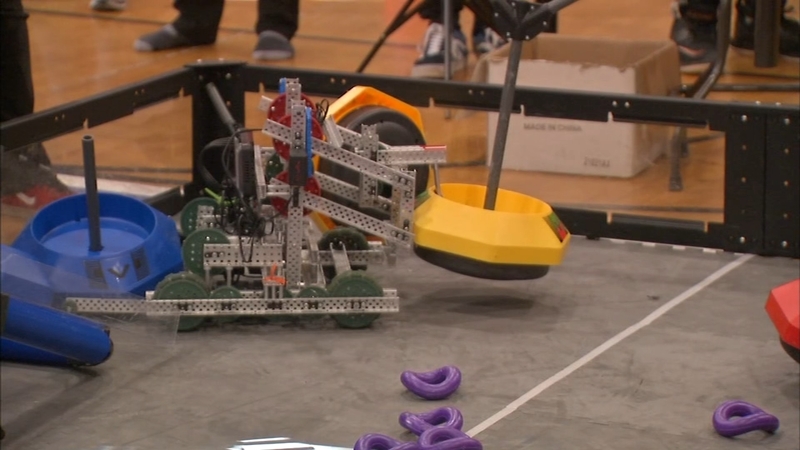 CHICAGO (WLS) -- Students are putting their skills to the test.

Teens from 23 different schools in the Chicagoland area - including Chicago Public Schools, private and suburban schools - are all competing in a robotics competition.

"I feel like I'm pretty competitive and this is a perfect sport for me," said Priyanshi Patel, a junior at Von Steuben Metropolitan High School.

Close to 200 students were at the Von Steuben Metropolitan Science Center Saturday for the REC VEX Robotics Tournament.

"These are robots that are programmed to do specific tasks to win the game, to maximize scoring," said Julio Mendez, coach of the Von Steuben robotics team.

The robots serve a variety of functions, from grabbing different objects to elevating items.

"My robot personally picks up two mogul goals and then it puts it on the balancing platform," Patel said.

"Just a lot of trial and error, a lot of iteration, a lot of actual engineering," Mendez said.

Many students said they're happy with their completed projects.

"I feel very proud that my robot even works, that it can pick up and do what it's made to do. I'm very proud of that," said Jamia Byrd, a sophomore at Bloom Trail High School.

Three winning teams will advance to the state competition later this month.

"Robotics has influenced me to want to go into mechanical engineering for sure," Patel said.

The students learn not just technical skills, but also teamwork, perseverance, communication, which will help prepare them to be college-ready.

"I want to be an industrial designer. So it has engineering, architecture, all of that. I feel like that just helped me a lot," Byrd said.

Mendez said it's not just about STEM, though.